We appeal to our web site readers to provide us with further detail on the company and on the implement. This cultivator is in remarkably good condition but we cannot remember where we got it from because it is certainly not a well-known manufacturer. 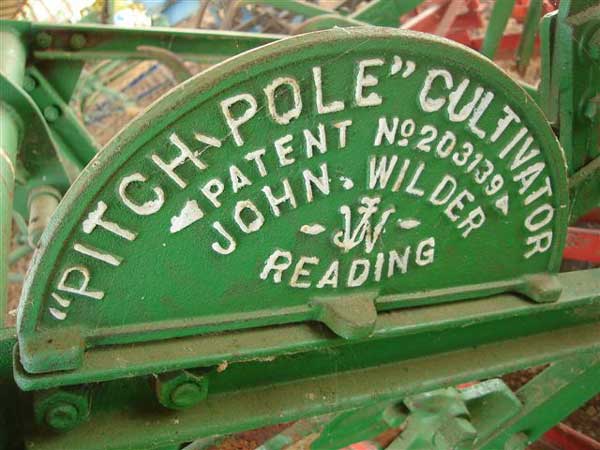 History - John Wilder
James Wilder (1789-1869) took on the Yield Hall Foundry in Reading in 1810. His sons, James and John inherited the business, and John gave his name to the later styling of the firm.
As well as general foundry work, this business became mainly a manufacturer of agricultural implements and machines. They were known especially for their chaff cutters and for harvesting implemenys. After the First World War the firm's pitch-pole hay gatherers and hay loaders gained it renewed celebrity.
The death of John Wilder in 1903 without male heirs led to the firm's being taken on by his cousins in Wallingford, who were in business as R. J. & H. Wilder, The Fish Foundry, Wallingford. In 1935 the two firms were merged as John Wilder Ltd.
Answers:
Subject: HTN 183 - Fascinating piece of British Agricultural history
Date: 06 February 2007 3:00:58 AM
To: This email address is being protected from spambots. You need JavaScript enabled to view it.