Emerson Brantingham Big 4-30 about to cross the 2-ft narrow gauge line at Sandstone.

HTN 96 - Some of the more interesting sights at Sandstone are the quiet ones.

Some of the more interesting sights at Sandstone are the quiet ones. Here is a tractor slumbering next to the entrance gate at Sandstone Estates. It was obviously spotted by a visitor who passed that way recently and won a photographic competition as a result. Beeld Newspaper, Tuesday, 25 April 2006 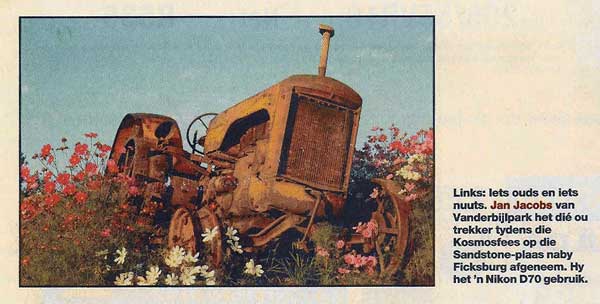 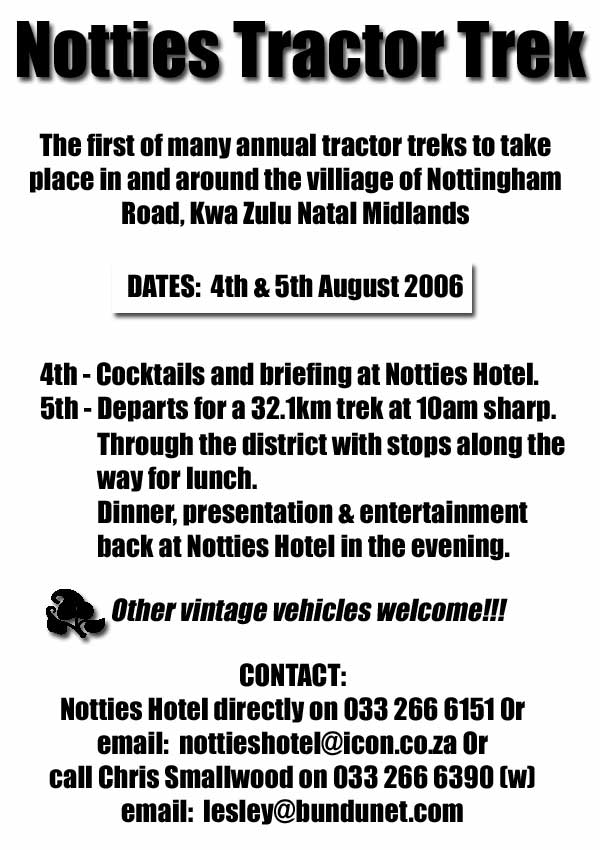 Click here to read an in invaluable contribution from Folker Stritberger regarding the background to the Deutz logo. >>

Click on any image for a bigger version.
Save

1907-1969
Deutz can trace its history to the Nikolaus Otto, Gottleib Daimler, and the first internal combustion engines. Agricultural machinery production began in 1907. Deutz tractors were very popular in western Europe after World War II. Farmers liked the simple, rugged air-cooled diesel engines. In 1969, Deutz mergered with Fahr, a farm implement manufacturer. The company was purchased by SAME in 1995.

HTN 68 - The tractors of Sandstone - Photographed by Jerry Evans.

A complete photographic inventory of the Sandstone Tractors.

Click here to read an invaluable contribution from Folker Stritberger regarding the background to the Deutz logo. >>

The first is a 1924 Waterloo Boy model N, Ser No 30099. This is one of the last to be built before production switched to the John Deere model D; in fact the first production D's serial number was 30401, so one can speculate that only some 300 N's were built after this one.

All in all it is estimated that close to 20 000 N's were built from 1917 to 1924. A few were constructed after the D was in production.
Deere had bought out the Waterloo Gas Engine Co, which built the Waterloo Boy range of tractors, in 1918, giving Deere a strong foothold in the burgeoning tractor market. The D was the first successful JD tractor, and its design was strongly Waterloo. Most notably it inherited the classic 2 cylinder horizontal layout, which was to last with Deere until 1960.

So the Waterloo Boy can truly said to be the forerunner of JD tractors.
The N produces 12 hp at the drawbar & 25 at the belt pulley, operating at 750 RPM. The engine featured relatively modern features such as a water pump & fan for water-cooling and an oil pump for lubrication. Less advanced were the cone clutch & external spur gear final drives.

30099 being one of the last produced, it features automotive type steering with an external worm & sector turning the front wheels together via a tie bar. Earlier N's featured a swiveling axle with fixed wheels, steered by means of a chain - a hangover from steam traction days. Sandstone Heritage has one of these types as well.
No other Waterloo Boy is known to have existed in South Africa before these two, although a well-preserved example exists in Zimbabwe, which was imported as new in the early 20's. It is also known that this tractor came South for exhibition at the Rand Agricultural Show in the 1960's.

30099 was imported together with the earlier version mentioned above, recently - in 1997 in fact. Both came from Oscar's Dreamland, Billings Montana, USA, when that huge collection of antique equipment was auctioned off. Sandstone also acquired a Rumely & 2 Emerson's from the same source.
It was complete and nominally a runner, but had not been in action for many years. However it was cleaned up & started to participate in the Great 100 working at Ficksburg in 1999.

Now the time has come to give it the first rate restoration it deserves.
Assessment revealed a healthy engine, but that wear in the transmission & clutch mechanisms and steering was considerable. Wear is also noted on the archaic final drives, but not enough to hinder operation. Having these enormous gears re-cast would be a formidable task indeed!

Apart from that, decades of dirt, grease & neglect had to be overcome.
Work commenced on the front axle, which was stripped & removed. The kingpins swivel in a floating bush, while the wheels do not have any form of bearings - also turning on bushes. These were sent for building up & turning.
Finding someone to undertake this type of work is not always easy as it is usually complicated. Such was the case here as it turns out that the kingpins are composed of one complete casting. Today a kingpin on a tractor has a cast elbow while the spindle, which rotates in the housing, is made of high-grade steel & pressed in to the elbow.
Since the spindle here is a casting the welding process to build it up made the metal extremely hard, and thus the machining had to be undertaken with great care. The cutting tool had to removed & sharpened every minute or so. However experience counts in a situation, and the engineer merely commented that he had found the process interesting, and enjoyed the challenge!

The radiator has returned from a repair, which involved removing the core entirely, as well as repairing the corroded bottom tank. Again the specialist employed appreciates working on antique equipment - most radiator shops would not look at such a job.
The fuel tank was corroded wafer thin at the bottom and has been reinforced. In addition the prominent spherical ends were badly dented, too much for the application of filler, so have had to be cut out, beaten & replaced.
The main transmission shaft & pulley are receiving attention to eliminate wear, while the clutch receives a re-line.

The magneto has been serviced, and found to have a brass cladding under the paint & grime. This has been polished & will be given a coat of clear lacquer. Similarly the carburetor is a substantial brass casting, and will also be polished.
The engine sump was found to be extremely dirty and has been thoroughly cleaned. The sight glass lubricators have been polished and new seals obtained. New plugs are ready to fit. Various & numerous small repairs have been carried out.
Meanwhile the engine & chassis have been stripped of all dirt & loose paint and primed with a high quality etch primer, mudguards & other panels sandblasted & professionally panel beaten and the wheels removed, stripped & primed.

Next step is a thorough sanding and then as soon as the weather (which has been atrocious) permits, the first coat of acrylic JD green applied.

After that comes final assembly & testing!
The second unit under repair is a John Deere model 70 all fuel standard, ser no 7018829, dating from 1955.
The standard configuration gives it a purposeful appearance, while as a worthy successor to the renowned model G, the 70 is capable of some serious work.
Rated at 38.2 hp on the belt, the classic JD 2 cylinder engine has a torque that far exceeds that of many modern tractors.

With a displacement of 376 Cu inches and a 6-speed transmission as well as the option of independent hydraulics & PTO, the 70 were a thoroughly modern tractor.
Today the 70 all fuel standard is rated 5 stars for collectability, as few were built in this combination. This puts it up with the High-crops and even more desirable than a Waterloo Boy, in the eyes of many!

At first glance this unit appeared to be restored, in so much as the paint & decals were relatively fresh, apart from an ugly gash in the bonnet. However when being assessed for the GT 400 it would only run full bat on one cylinder, when it could be coaxed to run at all, and was left as too unreliable.
Subsequently the carb was removed and surprise! - One of the throttle butterflies was missing - no wonder it ran flat out on one cylinder! This was rectified and the tractor did run a whole lot better, but not all that reliably. This together with shabby appearance, poor clutch, brakes & steering prompted a re-build.

Again first priority was the front axle, which was removed & stripped, receiving new kingpins, bushes, centre pin etc. All the steering joints were set up and bearings renewed. All components were well worn, particularly the centre pin which was about 50% worn away!

Next the engine. A growing suspicion developed that the missing butterfly might be lurking in the manifold - after all, who would install a carb without it?
The manifold was removed & revealed nothing. Of course 2 of the bolts sheared off - par for the course - and a full mornings work to drill the studs out ensued!
Since a re-ring was on the cards the head had to come off - and once on the bench out fell the missing butterfly!

Obviously the 2 tiny screws had come loose and the disc had slipped through and been sucked down to the inlet valve where it jammed. It had got just far enough to damage the rim of the valve, but luckily there was enough meat to re-face.
From there on the job was straightforward, and the head is back in place. The carb has been completely re-built, and various controls & linkages repaired.
Meanwhile the rear platform has been stripped and the wide distinctive mudguards and bonnet professionally repaired, while the balance of the tractor has been stripped & cleaned, and primed.