Stephen Sokolic came and helped today with the making and fitting of more buckets to the water wheel. When we were carrying out the un-bent sheets, he asked how many to bring. I thought 12 would be a good idea, based on what I'd managed to do on my own on the prebvious two Saturdays. I had an idea Stephen was eyeing the pile of un-bent ones during the day as we progressed, and they didn't seem to be getting any less. The reason was, while he wasn't watching, I was adding more to the stack!

We split the chores of making and fitting them between us, and it saved a lot of time. He had the messy job of fitting them, lots of Iscor Black on his hands from the partly painted buckets and the bolts and nuts which we had soaking in the stuff. I had the cleaner work of shaping the buckets, cutting out the corners and centre-punching and drilling.
One big difference was, when visitors arrived and I gave them the usual tour, production didn't stop! Stepen just kept beavering away, fitting those sticky bolts and nuts!

We worked around the wheel first, filling some gaps from the last two weeks, until we had every third bucket fitted. Then we did the two between them in one place, then turned the wheel to the diametrically opposite side and did two more there. Then 90 degrees apart, and opposite that also. Then we started widening the fours. Now we have two opposite runs of ten new buckets in a row, as well as two fours. In the end, we'd made and fitted 19! That means that there are only 18 more to do! Things are suddenly moving fast!
There's still a lot of painting to do, but they are painted where it matters, where the metal sheet is in contact with the 'starts' as well as against the wooden planks, and on the cut edges, including the bolt holes. 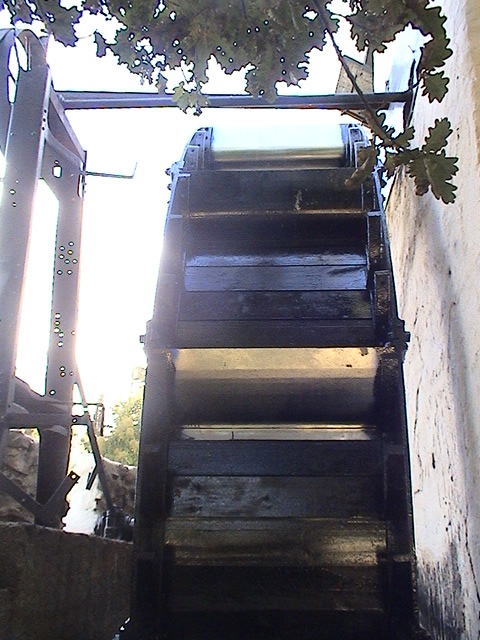 I had tried in the week to get bolts without modern markings on their heads. Two places in Cape Town promised they had them, but when both parcels arrived, they had TP m and CW 4.6 respectively, prominently raised on their heads. We had managed to get un-marked cup-squares for the planks. We're already compromising by using Metric bolts, but I'm not prepared to advertise the fact! There was nothing for it except to grind the markings off..... 250 bolt heads! Unfortunately this means the galvanising has gone too, but they were immediately dipped in Iscor Black and will get many more coats in the future.

On Friday I had time to do more on the bottom of the main elevator at home. I'd made the basics of the new box last week, now I had to mark and drill the correct place for the shaft of the pulley to pass through. Once that was done, I could dismantle the remains of the old box. Well, it fell apart! I removed the bearings and the wooden spacer blocks behind them which were nicely preserved with oil, and transferred them to the new box, lining them up with the new holes I had just drilled.

I could then turn my attention to the shaft ends of the pulley which were badly worn. It fitted nicely into my lathe here at home, and to give an idea of the wear, the shaft was originally 1" in diameter, it's now a little over ¾"! 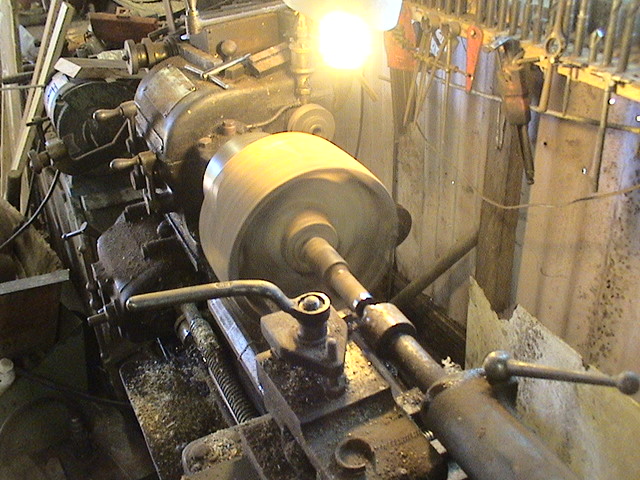 The cast iron bearings will now need bushing to size, no problems expected there.
I could then cut, mitre and fit the old Oregon skirting I'd found, to form the strip to attach the box to the base of the vertical trunking for the continuous belt with the buckets on. In the end, I had this to show for my efforts: 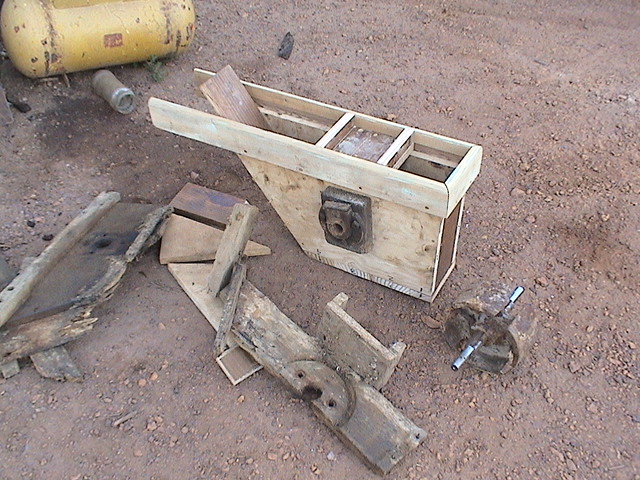 Here are the remains of the old box and next to them, the pulley with machined ends on the shafts.
On Saturday evening, after fitting all those buckets, there was still time to offer this up in its new position and to work out how the end under the big grain hopper must look. As it happens, all of the excess at the sloping end can be cut off flush. The mouth of the hopper is just there, level with the ends of the vertical trunking. Easier than I thought! There's also just enough space to fit it between the concrete floor of the 'sump' below the grain hopper and the bottom of the trunking.

Progress! We're starting to discuss the launder and tailrace!