I think I can now say the water wheel is fully restored! Painting inside and out wasn't as straightforward as I thought, besides, 48 buckets X 2 is a lot of painting. Also half the buckets had a lot of oak leaves stuck on previous paint and these had to be scraped off first. The inside of the buckets I did standing in the tailrace where we'd done the assembling, the outside I did at the top, sitting on the support for the launder, painting one bucket, then pushing the wheel away with my feet, one bucket at a time. By the time I was nearly finished with this I was stretching my neck, hoping that I'd start seeing the freshly painted ones coming up. Eventually they did, then there were five to go then four, then three..... then they were all done! 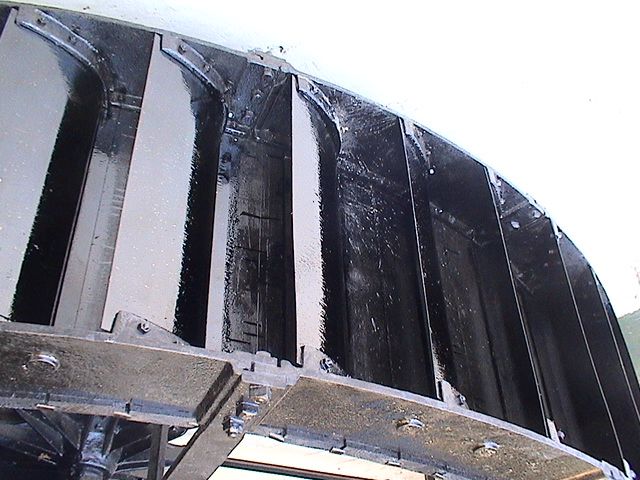 The Iscor Black has a lot of surface tension and on the shiny galvanised sheet it makes a hammertone finish, with speckles of shiny metal showing, after the first coat. However, with a second coat, these cover and the resulting rough effect is pleasing. One is now less aware of the slight ridges of the curve caused in the bending process.

But before I started painting the buckets, I had to empty the bucket I'd brought, of the ABE product 'Super Laykold', a water-based tar emulsion, used for waterproofing dams, etc. I attacked the mill-house wall, from the centre of the wheel to the right and down, with it. I reckon it's the right product for this job. It binds loose plaster and at the same time makes a waterproof layer. Some tar-based product has been used on this wall before, there's even evidence of it behind the whitewash higher up. The whitewash will have to be removed if we apply another coat of tar there. There is also some pointing to do in the plastering, but not much (see patch in painting below). 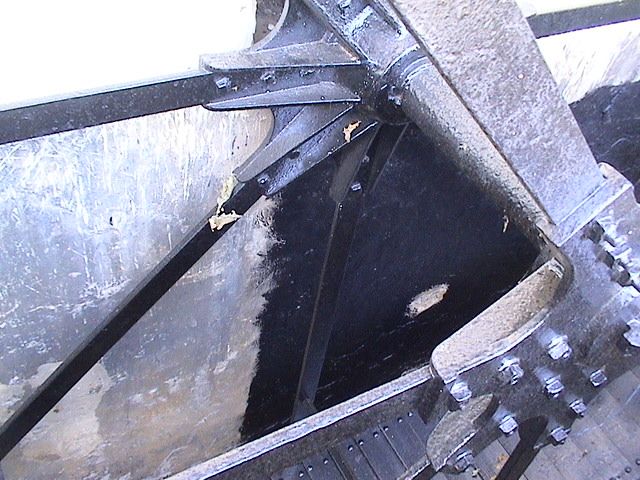 So this is the view from the tailrace: 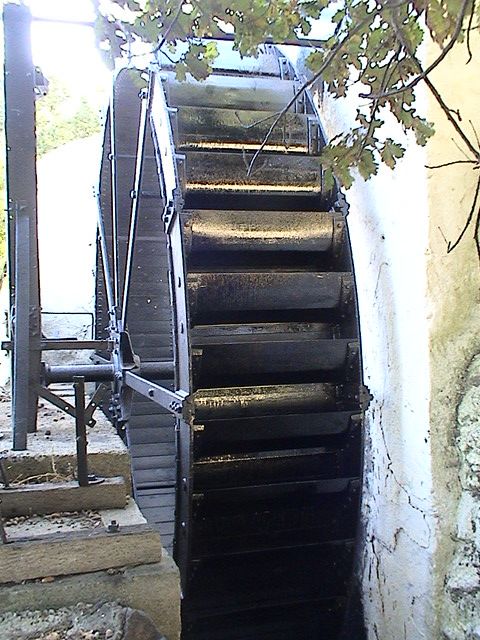 I then did some measuring for the section of launder above the wheel which Keith is suggesting (and I agree) should be made of wood in a traditional design. The remainder will be a corrugated iron trough as Manie Muller remembers it being from his childhood. Those sheets are on their way, steel is going up in price so fast, you just have to close your eyes and order! The sheets will be 6.5 metres long, I was hoping to get 13 metre sections, but the delivery would have been too complicated. Five of these lengths joined will reach from the top of the garden to over the last stone-built support, where it will run into the wooden one with an adaptor of some kind.

I had an order for meal, so I did a batch and a half and got 10 kg. I altered my method a bit and exchanged bags half way through the first batch and sifted it quickly. I didn't waste time weighing and bagging it at that stage, but threw the siftings back into the mill with the un-milled grain as soon as I could. I repeated that several times, changing bags, sifting and throwing back. At the very end, I threw back just the siftings and ran them through again on their own. The result was that when all was weighed out there were ten 1kg bags of meal and less than ¼kg of bran which hadn't passed through the mosquito-netting of the sieve.

There was still time to climb into the sump under the main hopper and offer up the base I'm making up for the elevator. I made a miscalculation with the position of the centre of the pulley, which means that the metal strip I've rolled up protrudes below the bottom of the box. However, I'm going to turn this to my advantage and make small hinged trap-doors through which I can remove the last grains which are not picked up by the buckets at the end of a demonstration. There will be room, I discovered, to pass in a baking tray underneath, to catch up the remaining grain, which I hope will be dislodged by the passing of the buckets. 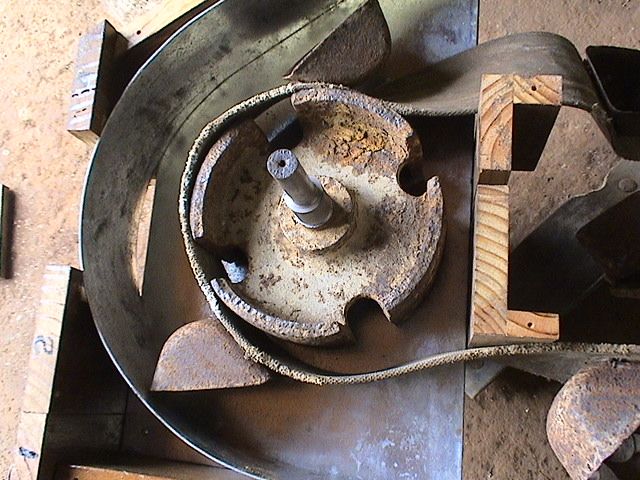 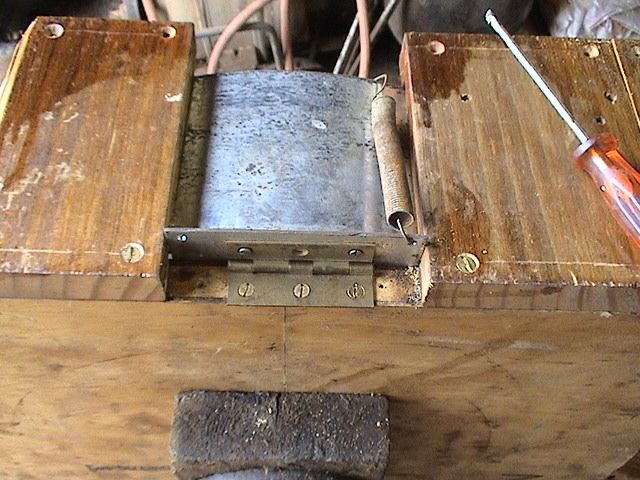 The spring will hook into a similar hole in the flap on the other side. And open: 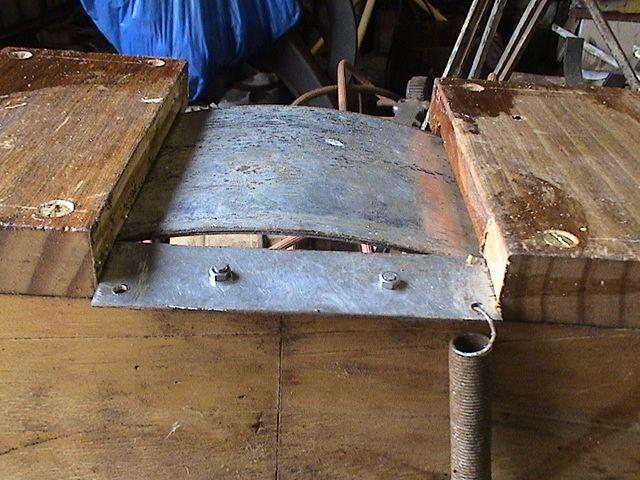 I had to machine away a bit of the cross-planks on each side to allow for the curve of the metal lining. I have to trim the width of the curved lining before fitting the other side. I would like to fill the gap between the wooden box and the curved liner with a space-filling foam, just to completely prevent grain getting in there and attracting rodents.

Oh, on that subject, when I opened up in the morning, in the Mill to greet me was Handbag the cat. Handbag? You ask? His tail is so long that it reaches his head in a big semi-circle!