Last week I didn't send a report, as I got so little done. Mostly, it was because of visitors, always fun and interesting. One was from a local newspaper; let's see what comes of that! I also milled two batches of grain so we have stock of meal for a while.

Today, I got stuck in with noisy work as soon as I arrived, deciding to tackle the wood for the rail on the other side of the launder. As before, this involved sawing lengthwise and running the quarter-round cutter on the router twice along what will be the top edge, which the metal will be wrapped over. 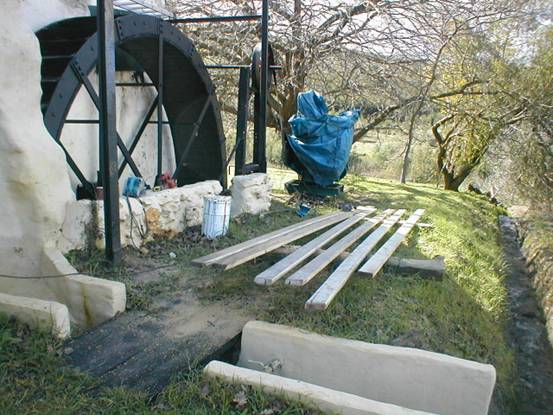 The next job was to run the power planer over both sides of all the planks, then to go over them with the belt sander. This removed all the old paint, so the coat of Iscor Black would soak in all over. This was applied between light rain showers. 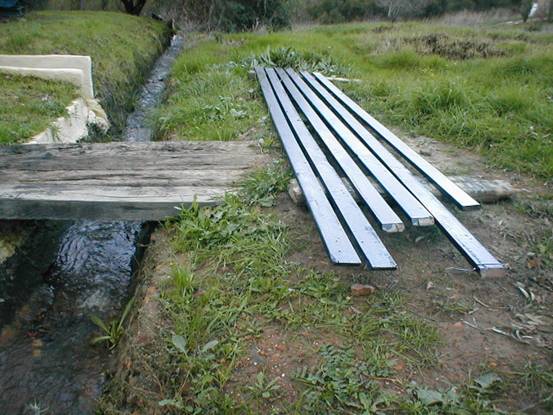 Two ends needed glueing and strapping before the paint went on. It can be seen that we had a respectable flow of water in the stream! We could mill nicely with that, I think. I did more touching up of paint on the launder as I went along. Before I left, I was determined to finish the last piece of the first rail on the launder: 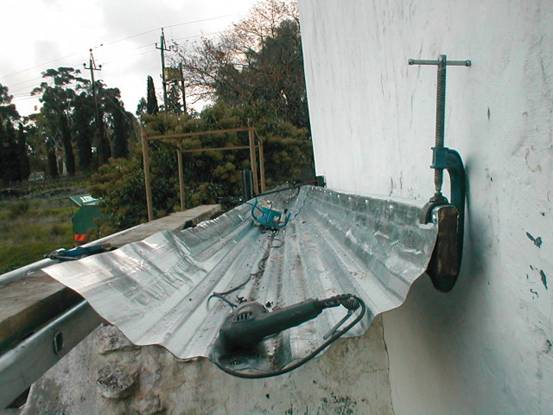 Done! From close-up, it doesn't look pretty. But from further away, it's looking fine, and authentic, I think. Some weeks ago, I sent the picture of Stanford Mill's launder.... rustic, certainly! On the left it can be seen that I've started rolling out the corrugations on the other side, ready to fit the second set of planks. I'll do them from this end back, starting with the shorter plank so the joins aren't opposite one another. I'll be pleased when this job is complete!

There had been a flood inside the mill from a fault in the flashing of the dormer that houses the top of the main elevator. While it was raining I could trace the problem. Before leaving, I drilled and fitted a nut and bolt through the two pieces of flashing where the leak comes from. With that tight, I applied some trusty Iscor Black, which might just work if it doesn't wash away before it dries.