At last, the metal trough of the launder is finished! Last time I was down, two weeks ago, I realised the planks for the second side were too short to reach the end. Luckily I still had a short piece of the same Oregon, so I prepared a piece at home, and at work we made another steel joining strip. The first job, then, was to drill the holes after aligning the planks: 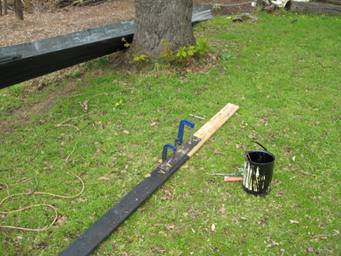 After which, before assembling, it all got a coat of the trusty Iscor Black, including down the bolt holes!

During the day I had four sets of visitors, which I always give full attention to, but it does mean the work stands still. It was afternoon before I attached these two planks to the rest and started folding over, bolting on and making up the spreaders. 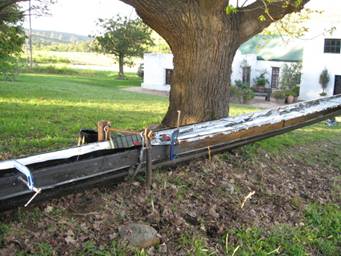 While I was passing the Oak, I had to shorten the tubes of two of the spreaders slightly, so the channel is slightly narrower there. At about the time this photo was taken, I was planning to pack up and go home, but something said I should just press on and finish the job! We've had so much rain lately, so to waste this fine weather day seemed a shame. 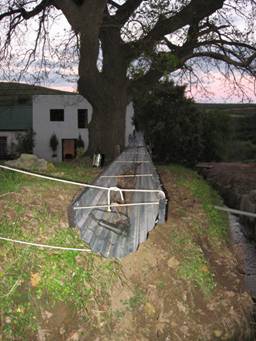 As it can be seen, it was getting dark by then, about 7pm, but I was feeling well pleased with progress!

Meanwhile we're making progress at both ends. The sluice to hold the water back at the top end is progressing at the workshop: 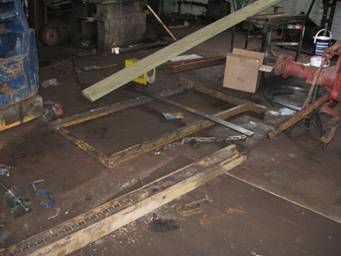 In the foreground the metal strips are being drilled and it's just possible to see the roller chain attached. On the left, the shaft with the sprockets which will work in the roller chain to move the gate up and down can just be seen. The 48mm thick plank is ready to cut up for the sluice gate, and the whole assembly will move up and down in the frame in the middle of the picture. I should have brought some Iscor Black back home!

The wood, from Somerset Timbers, also arrived, for the wheel-end of the launder. I laid it out inside, to get an idea of how it will look: 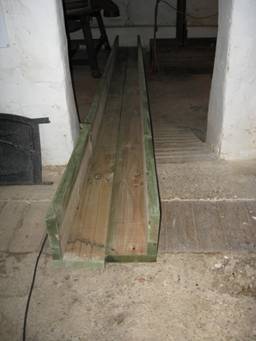 I now have to work out how to marry it up with the end of the metal launder: 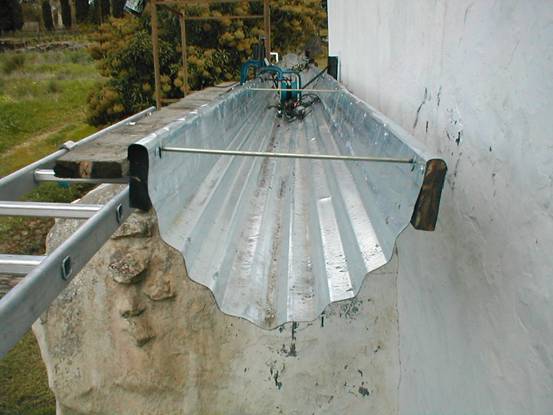 So the last thing I did was to measure both up; here they are compared: 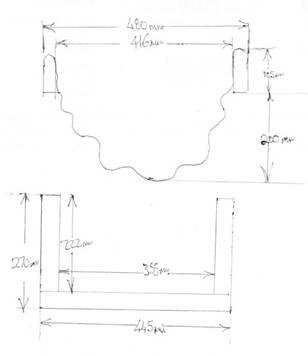 So it would appear that it would look neatest if the wooden rails of the metal section were to rest on top of the new wooden sides, flush on the outside, for the length, about 2 metres, that they overlap. To do this, I will have to shorten the tubes of the last couple of spreaders, so we land up with a 445mm width. Then I shall probably have to plane off the inner upper edges of the new uprights at an acute angle so that the corrugated iron doesn't foul. To make the finished product as neat as possible, it will probably mean making more wooden strips 105mm high, and attaching them to the upper edges of the new box sides, from the end of the overlap to the very end. I am planning to use 50 x 6 metal strips, about 7 of them, bent up into a square U, to brace the outsides of the wooden box. I have some interesting fish-tails to weld to the ends of them, to give them a wrought-iron look. 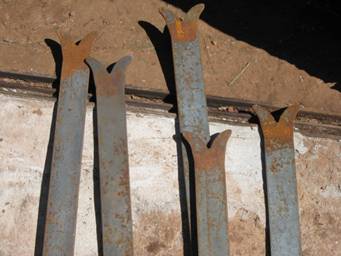 So we won't make any up until the two parts of the launder are married up and a decision is made about the height.