Today was a follow-on from activity during the last two weeks at my workshop where we've been making the frame and components for the sluice gate. Not to be confused with the weir at the dam outlet which will control the outflow of water; this will be placed just downstream of the top end of the launder and it must prevent any water from continuing down the mill stream. It must back the water up and raise the level by 1.1 metres for it to flow into the top end of the launder.

My inspitation came from two sources, one a 100-year-old, wooden sluice gate seen on Applegarth Farm, here in Elgin. Incidentally, the van As family have been managers on that farm for about 60 years; they moved there from Compagnes Drift! 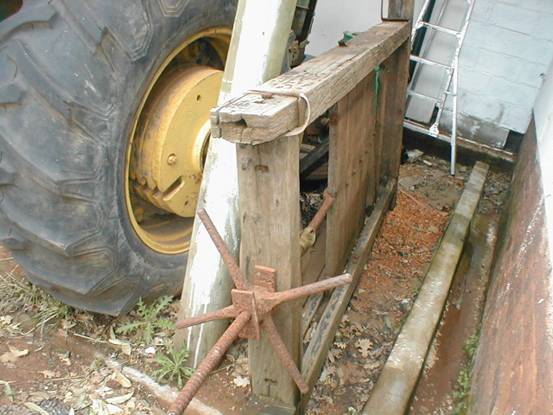 There was discussion in connection with the lead-screw and we thought the operation would be too slow. I saw a quicker method on a farm in Aberdeen recently: 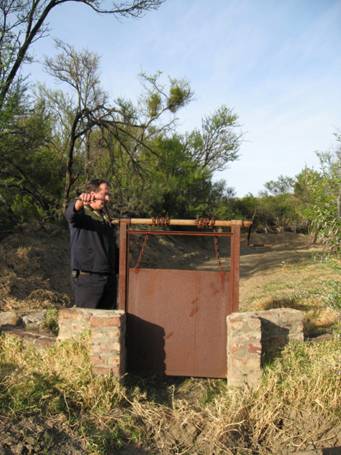 That is a steel gate, I wanted a wooden one like the one in the upper picture. That might tend to float, so it needs to be cranked up and down.

Having decided on wood, I discussed with Keith Wetmore of Somerset Timbers whether we should use tongue-and-groove planks. He said we should rather stay with the groove-and-groove with the galvanised metal strip between, as we did with the water wheel. They cut the grooves for those at the sawmill, the planks he supplied for the sluice were plain, so first, it meant making a decent 'fence' for the base of the hand-held circular saw. This would be to ensure that the groove was exactly in the middle, and also that it would be square. A bit of time in the garage last night produced this: 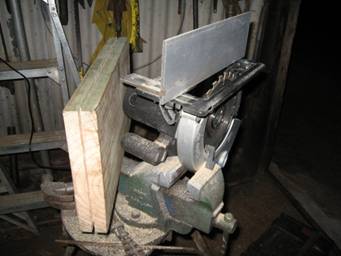 That 'fence' or guide is a 100mm x 6mm steel plate with slotted brackets for cup-square bolts. After a bit of experimenting, I was happy with the result.

Once at the farm, I could cut the rest of the grooves and lay it all out:

What's that vertical join in the middle plank, you ask? A lesson in 'think three times, measure twice and cut ONCE'! We'll have to live with that, but it too has a metal strip embedded at the join. Looking at the grooves and the metal strip: 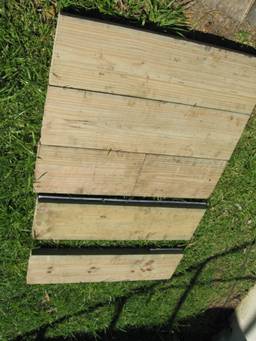 It then needed a coat of Iscor Black in the grooves and on the metal strips, and also where the steel braces would be covering over the wood later. I could then clamp it all up and start drilling for bolts: 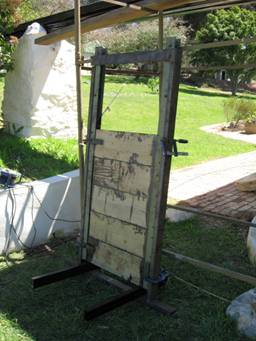 I've moved the joined plank up to one-from-the-top. The steel braces are made of 80mm x 6mm flat plates on each side of the planks in the channel slides, stiffening up and making the finished gate a good snug fit. The steel braces were pre-drilled at the workshop, so I drilled part way into the wood from each side and the holes tended to line up! Now looking more like a sluice gate! 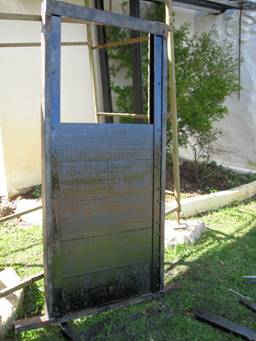 I haven't painted the channel slides yet, there are steel lugs to weld on to the outside of the framework, to key into the concrete which it'll be embedded in. The extended channel at the sill is for that also. From the other side, one can see the stretched roller chain in which a pair of sprockets on a shaft will run, to winch the sluice up and down: 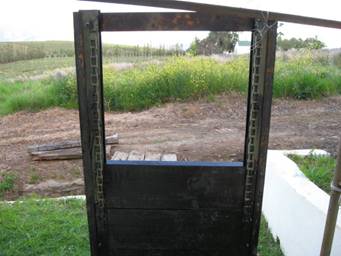 However, there's a slight problem, the two chains are not parallel! The metal strips lean inward slightly at the top. I've measured up for a metal strip or piece of angle to weld in, from one side across to the other.

I also milled one bucketful of grain, for the benefit of both groups of people staying in the self-catering cottages on the farm; also to bring some home.

Having finished assembling the metal part of the launder last Saturday, I couldn't resist putting the hose-pipe in at the top and watching the flow: 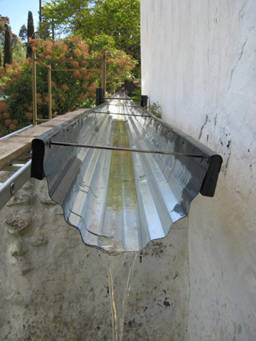 Things are looking up! There are two places in the launder which got damaged at an early stage in a North-west storm. Before packing up, I looked long and hard at these, and think the best cure will be to cut out a section and patch it with some corrugated sheet which is left over: 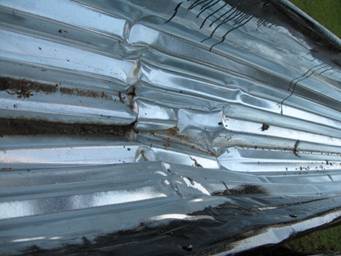 In the storm, the movement of the metal over the temporary wire sling actually cut through the sheeting! The trough was also badly buckled. There was very little other evidence of leaking while the water was flowing.