Autogetem? United States Army slang for 'on fully automatic'! Although there are refinements still to do, the Vitruvian mill worked on Saturday without much supervision. Even more satisfying was that it did so in the presence of two of my 'mentors' from Mostert's Mill, Joanna Marx and Charles Forcioli! 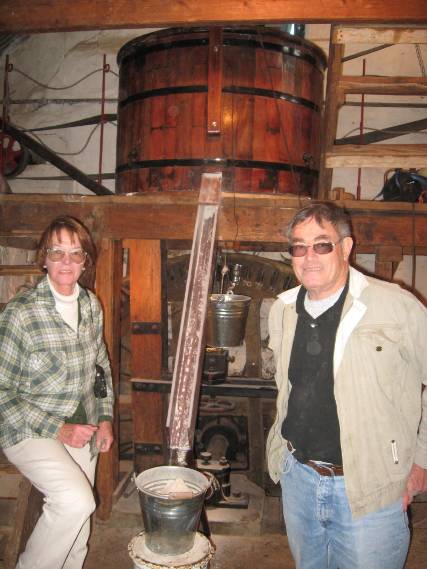 But I'm getting ahead of myself.... First I had to do something about the sweeper which didn't work last time. At Mostert's, they use a leather flap, reinforced behind with a piece of plastic. I decided on a piece of belting, something which would have been lying around at the mill at the time (remember we're trying to freeze the last day it worked commercially!). 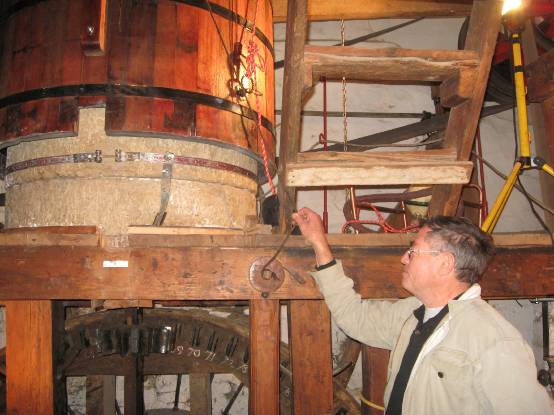 Charles was a great help making sure I didn't drill into my fingers! The metal strip needed to be extended and the flap is attached to the end of that with two bolts and washers: 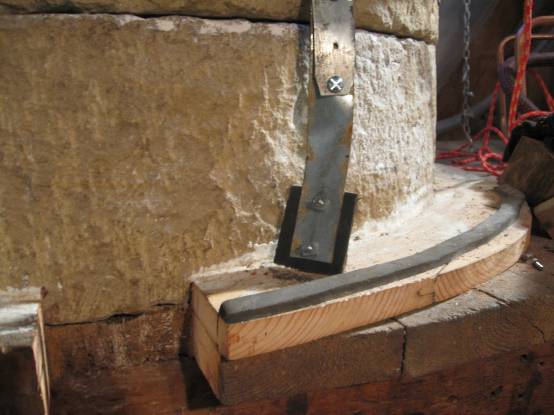 But to do this, I had, yet again, to put the big beams in place to lift the tun high enough. Once the tun was back down in place and centralised, with two people it was a lot easier to remove them! Then the race was on to try it out! Lid on, horse assembled, for the first time; after a bit of filing on the joints, it just drops in on the slots in the tees.

During the week before, I had added sides to the shoe, hopefully to prevent spillage over the edge, but I was still worried about the gap between the bottom of the hopper and the shoe. 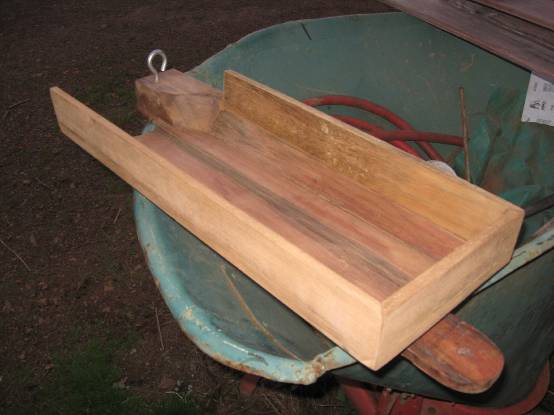 We assembled the hopper, shoe, crook-string, damsel and makeshift 'Miller's willow' (a coil tension spring) and got the water wheel running. First we shook some grain into the shoe, just to try the sweeper out.... It seemed to be working, but it does give the edge of the meal spout a whack every time it goes around! I then conditioned a bucket of grain and, heart in mouth, poured it in to the hopper. Well, there was still significant spillage over the raised edges, but having anticipated this, I'd brought a longer bolt for the shoe's pivot and some spacers to try out. At about 70mm higher at the pivot, the shoe worked properly. The mouth of the hopper is then well below the level of the extended sides, and the flow of grain can be regulated. 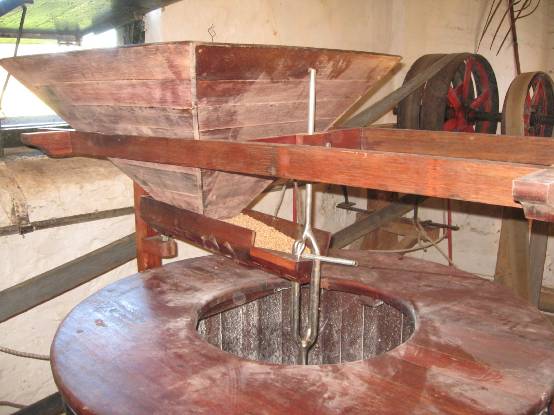 During the week, I had a 'sock' made for the delivery end of the shoe, anticipating the problem that not all the grain would make it from the shoe to the eye of the runner. We have seen such before at Boskloof, near Stanford and at Kabida near Matjiesfontein. In this case, there's half a metre between the shoe and the eye of the runner.

At this stage, we could comfortably look at Joanna's photos of Mills she had visited on a recent tour with The International Molinological Socitey (TIMS) in England and the Netherlands, while the Vitruvian mill ground away with little attention. Charles, whose favourite job at Mostert's Mill is to control the Milling process (which requites constant vigilance as the wind is always fickle), was more than happy with the fineness as well as the delivery rate from the mill. He also said that milling in this way with a constant power supply is a lot more relaxing than his type of milling! With every gust of wind, he has to shake extra grain into the eye of the stones; with every lull, he has to open the stones a bit, for fear of a sudden stop. 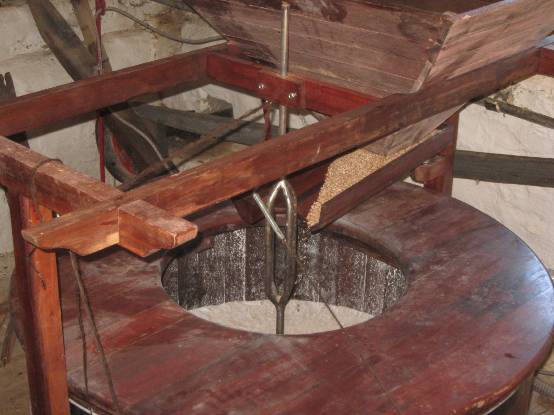 The sweeper worked well. After doing another batch, I put the mill to bed. The intention is always to close the tun completely, so the damsel is easy to remove and a cover can be inserted over the eye of the runner. I then took the lid off and extended the 'radiator brush' handle and swept the remaining meal all around to the spout and saved it in a separate bucket and weighed it. It was less than 1kg, a big reduction from the 2½ I had managed to save after lifting the tun last time (there was more lost which I couldn't sweep up). Considering the circumference of the bedstone is 3.3 metres, that's not a lot left behind, and it was easy to sweep to the spout.

With the lid back on, I measured it for a permanent 'plug' and covered it temporarily: 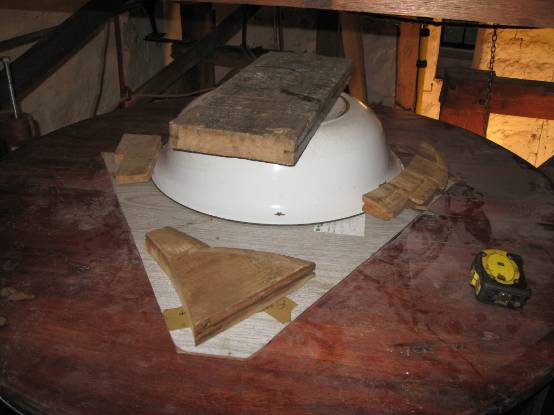 The flap I made for the meal-spout works to a certain extent; I might make something which hinges up out of the way: 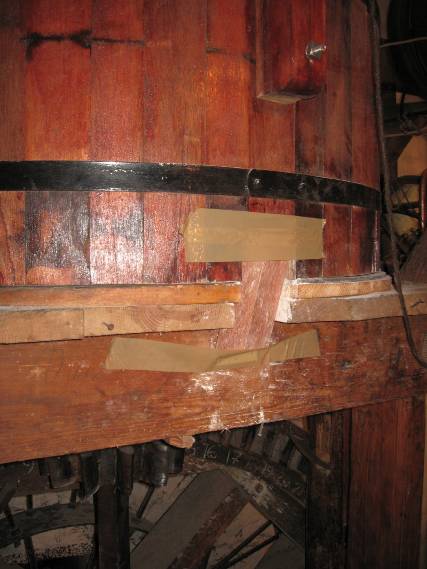 Later in the day, Jayne popped in with her latest acquisition, from friend Craig in Hermanus; a beautiful hand-held sieve with a finer mesh than we have been using. We did some experimentation with the different meshes, checking what stayed behind in the sieve we've been using all along (nothing, except the un-milled grains which didn't go down the eye), Jayne's 'new' one, and the rotary sieve which we have already: 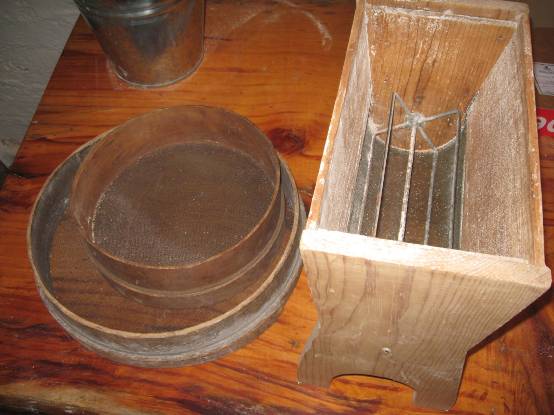 At each stage, more stayed behind, demonstrating the way a rotary 'screen' works. Such a machine would be the only thing I'd be happy to add to this mill house, as I feel it must have had one, possibly upstairs, driven by the spare pulley.

I brought the hopper and shoe back home as I hadn't had time to fit the remaining galvanised sheets, nor the ring for the 'sock'. I rolled a ring from 6mm cold drawn wire and welded two rods on, heated them and hammered them flat, all to give a wrought look: 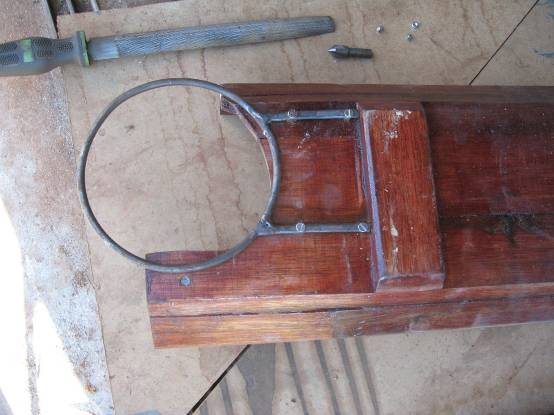 Our local shoemaker made up the 'sock', long enough to be used double, out of imitation leather. The result should prevent those stray grains hitting the top of the runner and flying out, unmilled: 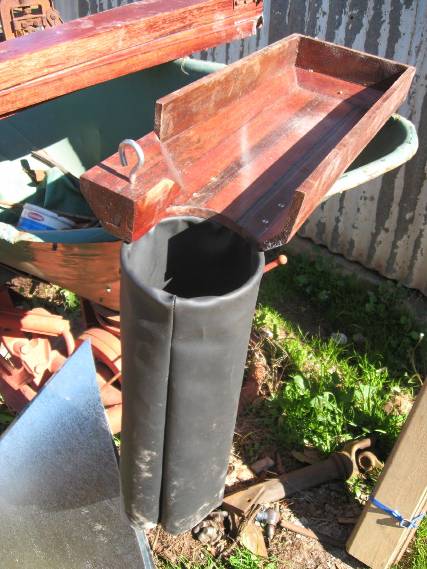 The remaining three galvanised sheets still needed a bit of trimming with a sanding disc on an angle grinder and attaching, giving us a hopefully non-stick surface: 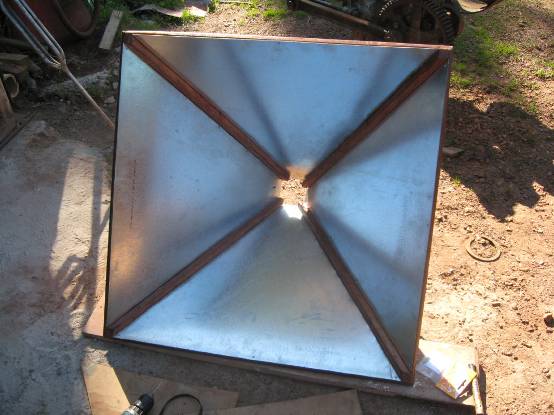 I also brought the meal-spout back to make a storage box for it at the Mill. I eventually caught up with the rest of the 'reject' Meranti planks kindly donated by Keith Wetmore of Somerset Timbers, and immediately began with the base of the box: 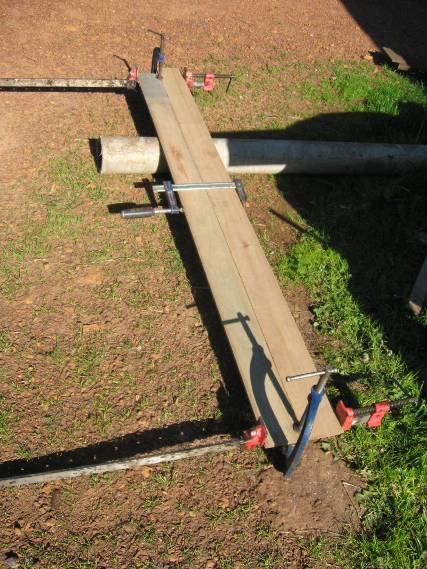 By Sunday evening, something three-dimensional was beginning to form around the meal-spout: 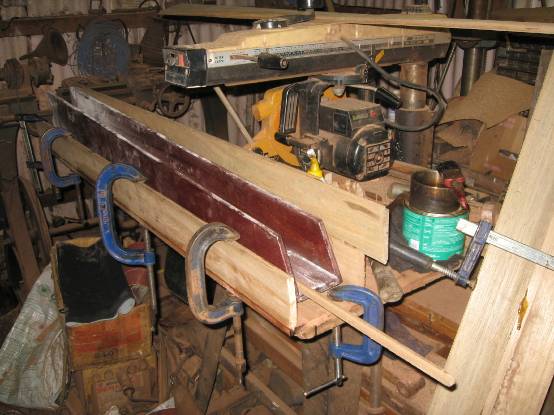