The 'furniture' of the Vitruvian mill is starting to come together! The first job was to square-up the tees and lay the two beams in them and to mark and cut them out to fit into the tees. The ends of the beams were 'ogee-ed' by Abie at Somerset Timbers, to match the ends of the tees he'd done before.

When I cut out the tees, some of the wood had broken out with the router, so this time I came properly prepared! 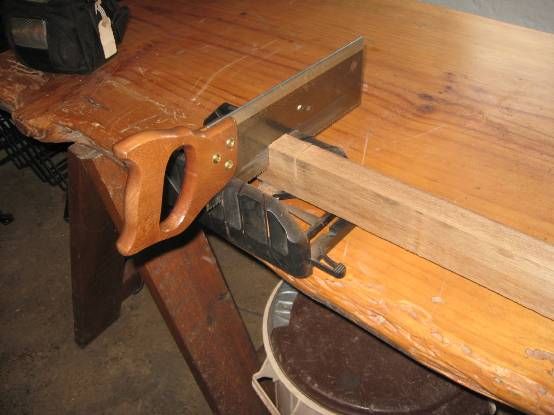 All I had then to do with the router bit was to remove the material in between. It went much faster too. During the week, I had made up the cross-bar to support the top of the damsel and drilled it.... a lot easier to get the hole vertical on a drill press! I had also made the slots in the beams for the ends if the cross bar, it's also a lot easier to do that on the saw! 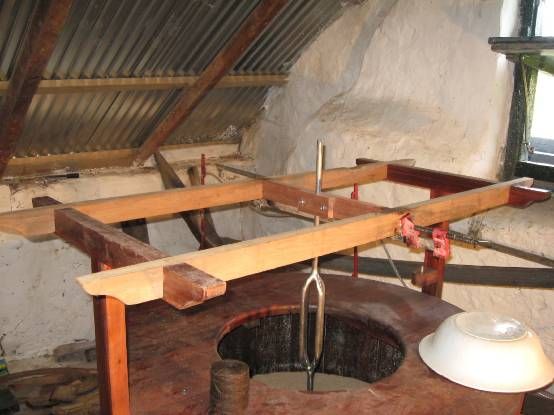 Those joints are glued only, so the clamp stayed on, but the whole assembly will just rest in the tees, for easy dismantling. The other two jobs done in the week were to make a wooden spreader for the top of the meal-spout which will double as a door when the spout is removed, and to make four square nuts for the tees where they attach to the tun. 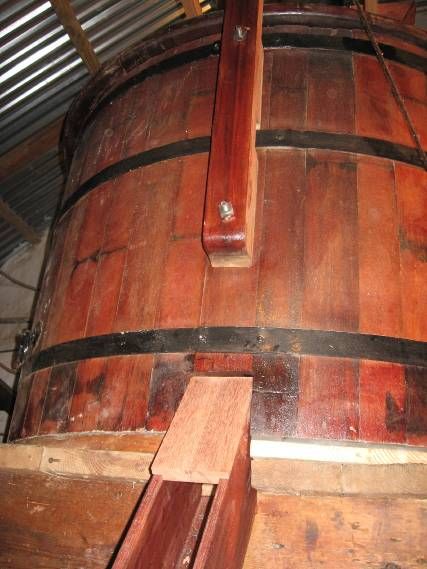 The spreader was made long enough to swing down (if I can devise a hinge) and close the opening, the cut-away pushes the sides of the meal spout outwards, firmly against the opening, and when we milled later, it just seemed to be long enough to prevent the cake-flour from blowing away.

Next job was to fit the shoe, which needed a bit of sanding to clear the damsel, and to offer up the hopper. 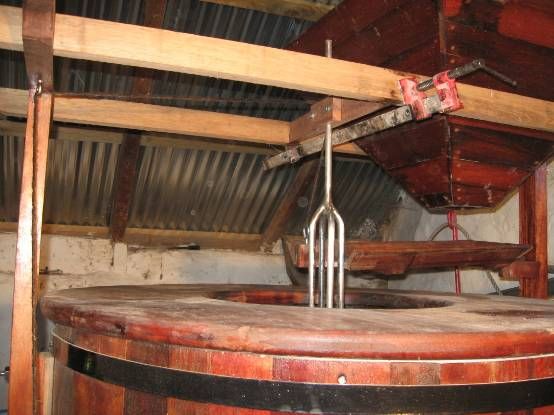 There's too much of a gap between the bottom of the hopper and the shoe. I intend chamfering the beams to let the hopper drop further into it and to increase the contact area, at the moment it's just resting on the edge. Then I can raise the shoe on its pivot.

But the big excitement at this stage was fitting the 'crook-string' to the original 'twist peg'; the only piece left of the original furniture! 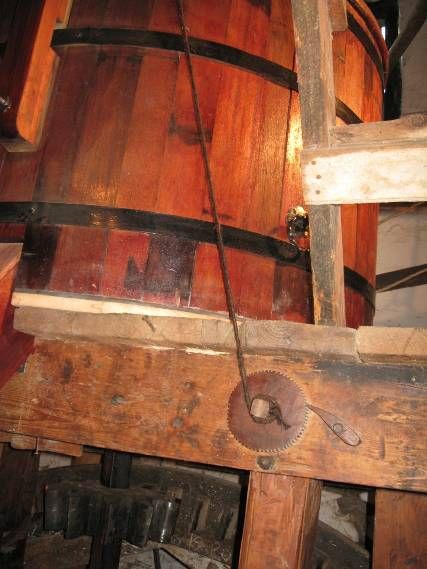 There was still a loop of the original string, a thick twine. I found a roll of tarred twine at the co-op and this is four strands twisted together to make up a similar thickness. There is still a vee-cut in the stones floor, so once I'd wrapped the string around the spindle, that dictated where I should fit the screw-eye in the tee above.

A roughly improvised 'miller's willow' in the form of a coil spring and a piece of string was all that still had to be made and then we could start milling! 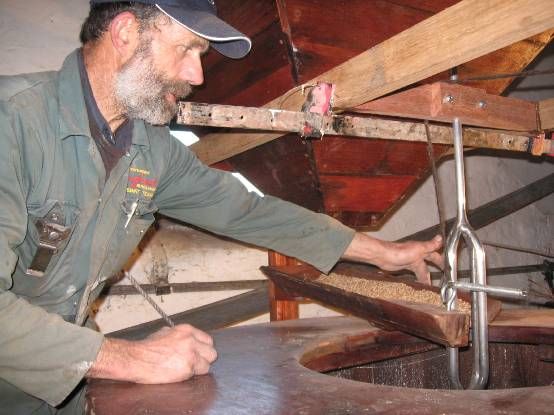 Still not using the hopper, I was scooping the grain into the shoe, to watch how it worked. There is a tendency for the grain to spill over the far edge, but otherwise, the action of the damsel on the rap works well! Some grain was not landing in the eye of the stones, so it will definitely need a sock or sleeve fitted at the end of the shoe. We have seen similar at Kabida and Boskloof.

The meal-spout was working well, and using a bucket is much easier than a bag! 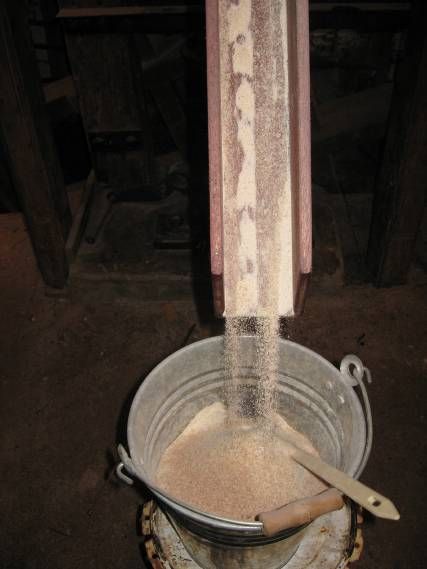 Once again almost all of the meal went through the sieve; what didn't, went through a second time. It didn't take long to produce a fair batch: 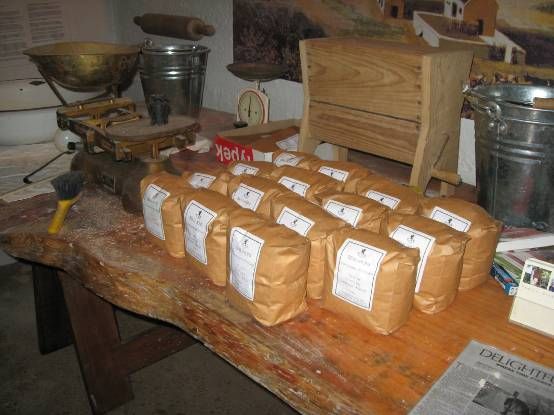 Nici Beaumont, who runs Zest Catering, had taken a bag to try out some sour-dough recipe with it. She brought the youngest member of the family, Sophie, and to keep her out of mischief: 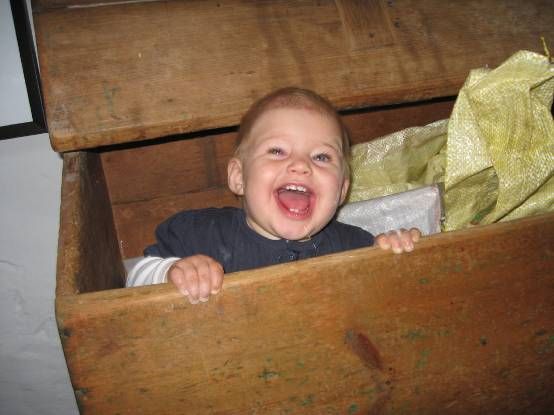 The other item which was under test was the sweeper, and although we were aware of the way it was propelling the meal out in pulses, it really isn't doing the job properly. I could tell, comparing the weight of grain we'd put in with the bagged meal. So I raised the tun on blocks after carefully vacuuming all around and managed to save 2½kg of fine meal. 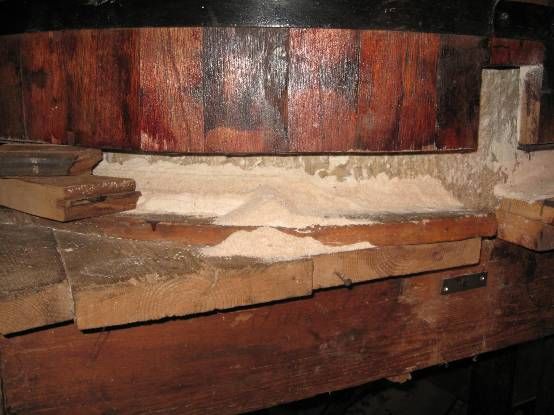 This was a disappointment, so clearly there must be something more positive than a paint-brush doing the propelling. With the lid off to raise it, I saw an interesting phenomenon: 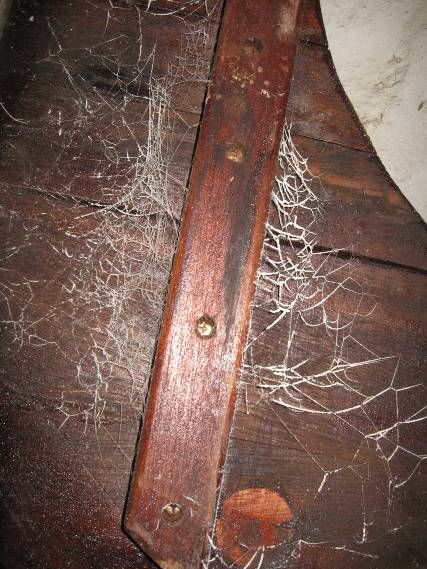 At one stage during the milling, a very dusty Daddy Long-legs came out of the meal spout, not happy with the proceedings at all!

On Sunday, I managed to chamfer the bars, which has allowed the hopper to drop by about 1½", so there will still have to be a fair thickness spacer under the pivot of the shoe to bring it up close enough to the mouth of the hopper to prevent the grain spilling over the edges. Higher sides on the shoe will help as well. 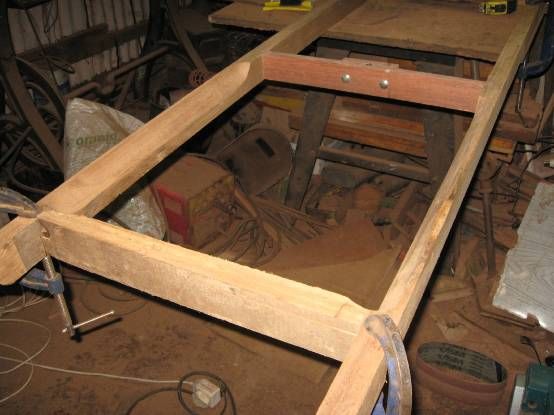 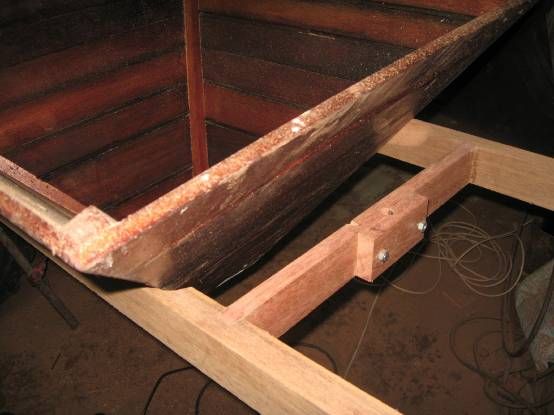 The roughness of the inside of the hopper has been worrying me since I made it. The ex-spray tank planks all have their smooth sides to the outside, and grain would have caught in the irregularities between them on the inside. During the week, I had some galvanised sheets cut, which just need to be trimmed to fit exactly: 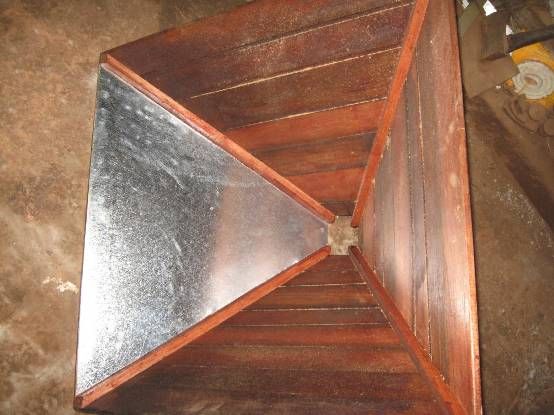 One done, three to go!