Keith Wetmore of Somerset Timbers kindly gave us some 'reject' Meranti tongue-and-groove planking. One man's meat..... nothing wrong with this for us! The fact that it is thin planking is ideal; as the available width for us to fit the meal spout into, is only 100mm. Thicker planking would have choked the meal flow. It didn't take long before we had this, for a start: 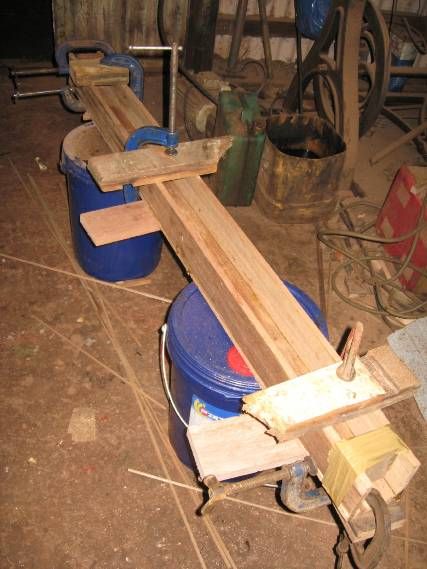 The base is two tongue and grooves, glued together and trimmed off to the required 100mm. Then I trimmed off the cracked grooves from two planks and cut grooves in the top of the base plank for their tongues to drop into: 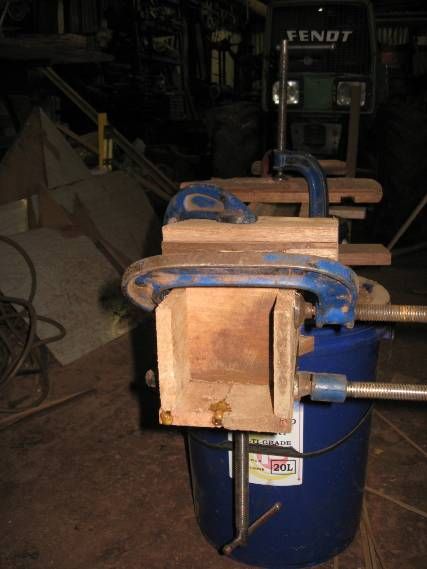 The wooden block in the end, apparently blocking it off, isn't glued, it's just there to square the assembly up! The next step is to raise the sides at the stones end, by cutting one plank diagonally in its length and fixing each half to the top of a side.

That was Thursday evening. On Friday, after sanding the assembly inside and out, I worked out how to cut the plank diagonally.... by pinning another plank to it on the diagonal and holding that against the 'fence' of the saw-table! It was a bit tricky making the wedge-shaped planks sit on top of the previous ones, but with a few spacers cut to the exact width, I could clamp the sides together onto the spacers, and then clamp the spacers down onto the base. There are a few panel pins at the thin end, just to hold it in place, although clamps were used for added pressure while drying. 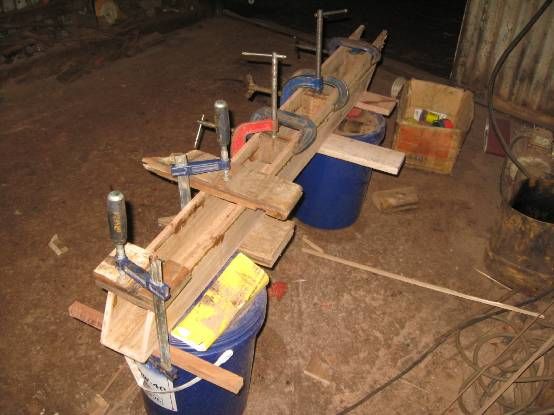 The thick end is just glued and clamped: 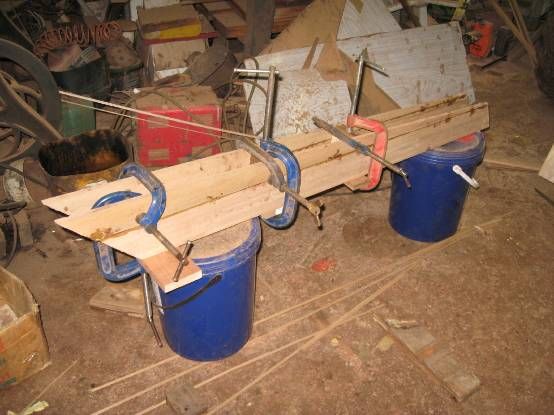 Now there will be more overlap of the meal spout over the opening in the stones floor and the 'tun': 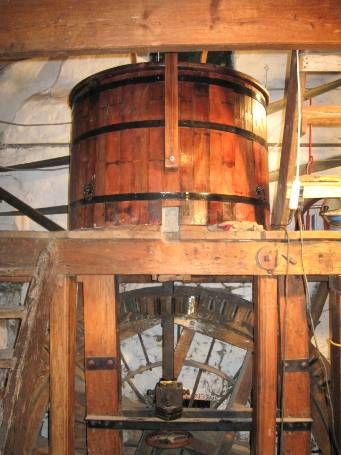 Saturday morning, the first job was to remove the clamps and give the whole spout a good sanding with the belt sander outside, and inside by hand... quite a job!

But before I could offer it up to the tun I had to sort the meal-sweeper brush out. Last time it had swung away from contact with the base. So I had to manhandle the beams back temporarily to lift the tun. Only then could I reach in and remove the band with the brush on it: 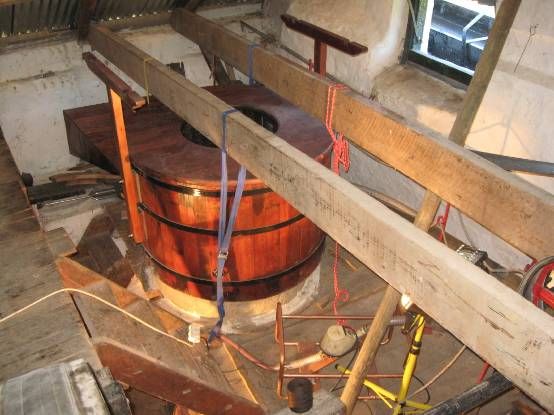 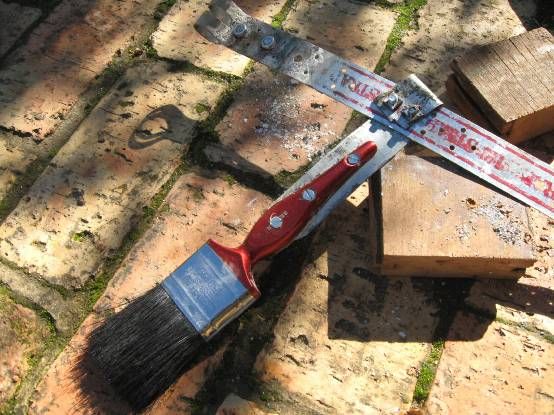 Now it's back on and firmly in contact with the ring around the bed stone: 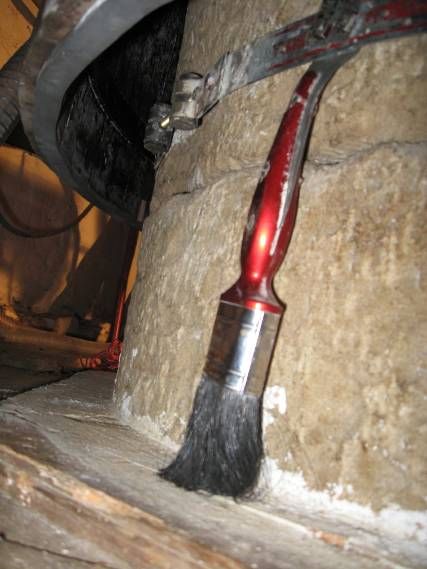 I also needed to make more of a crank in the metal strip; the bed-stone outer rim is not perfectly concentric with the bearing in the middle and the handle was touching the bedstone at the furthest point.

Then I could trim the gap in the stones floor for a good fit with the meal spout, using a sanding disc on the angle grinder. Likewise, with the tun raised I could do the same with the gap on that. Once lowered, it was possible to offer up the new meal-spout: 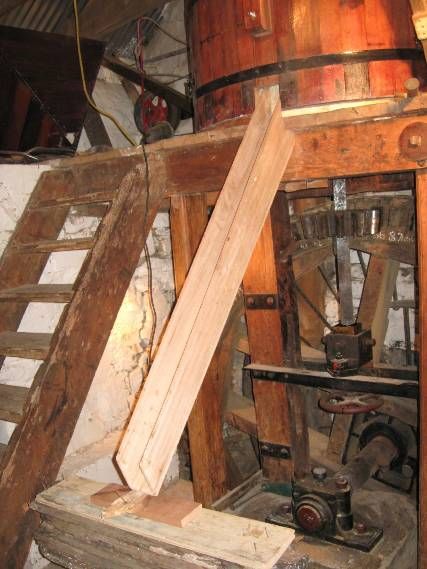 Then I could mark and cut off the excess at the top, and make up hooks for the top end so that it can be removed easily. I removed a few scruffy nails which had been hammered into the hurstings and I seem to have got away with one woodscrew only into the hurstings with the new arrangement. The material is from angle brackets. 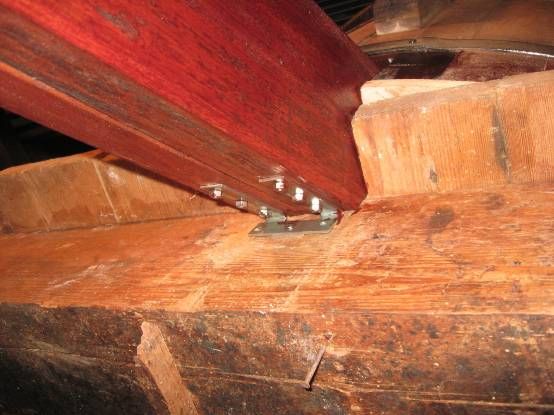 The cross-ways one has a short piece behind as a spacer. This was taken after the spout had had a couple of coats of the Woodoc 50 and rosewood toner, as has been used on the rest of the furniture. 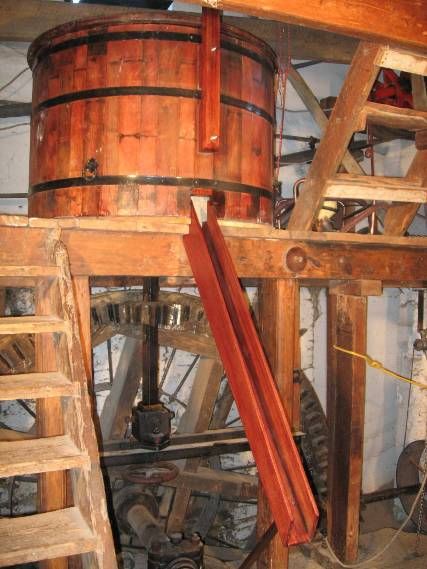 The leg is hinged and folds up against the spout when it has been hooked off. 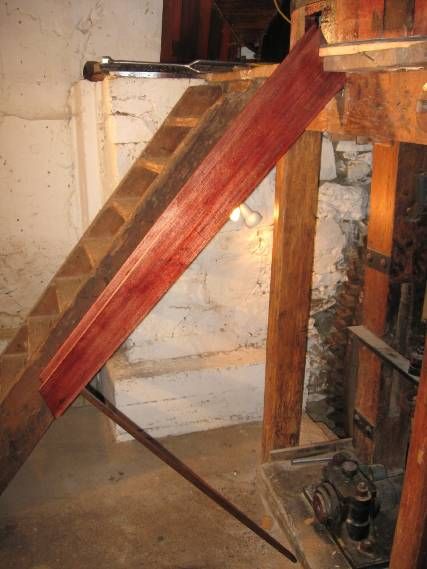