Something totally different! On a weekday visit to the Northern Cape town of Calvinia (pron Kul-fffiee-niee-ah) in search of parts for a Commer TS3 lorry which Keith Wetmore from Somerset Timbers is restoring, we had an hour spare after a very successful day so far, to visit the town's museum.

I knew from before that it was housed in the old Synagogue, but didn't know the background. The enthusiastic curatrix explained that when the last Jews left Calvinia in 1968, they donated the building to the Municipality for this use. It has since been taken over by the Province (Northern Cape, for the moment, but plans, we were told, are in place for it to join the Western Cape). Since the donation, the building has been extensively enlarged, and a house next door bought and incorporated into the complex. It is very well run, cheap to visit (R5 for an adult) and excellently kept.

However, there is a cloud on the horizon, the head curatrix has retired, our guide is about to, and there's nobody in line to replace them. This has caused some worries, even during our visit; owners of lent, not donated aretfacts were there to claim them.

There are sections for household, trades, wool industry, rail, electricity generation, transport, and not surprisingly, histories of the Jewish families from the area. There were also many old photographs which I would have liked to have had more time to study. One whole room was dedicated to a set of quadruplets born in 1951, from their hospital cots, right through to wedding photos! They must have caused quite a sensation at the time!

However, it was in the trades section that my interest was really caught by a magnificent horse mill! 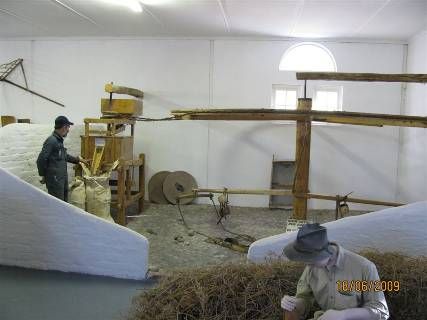 This gives one an idea of how well laid out and kept this museum is! Detail of the horse wheel: 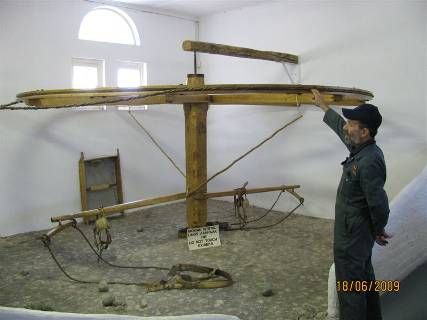 The correct hide rope has been twined for the drive, with a twist at the driven end. Even the harness is ready to span a pair in! The mill itself was really eye-catching. The display card mentioned it was made of cedar, although I'd guessed it to be yellowwood. 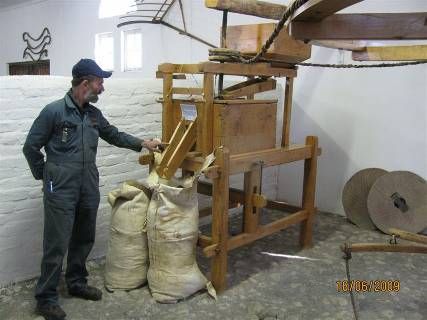 There was a lot of evidence that this could have been semi-portable. The hurstings (supporting legs) are pegged, giving it a knock-apart look. I am pointing out to Keith that it's for the meal spout that we're waiting for a kind donation of planks from him! The bags are complete animal skins, although I see there are notches at the end of the spout to hang a bag from. Detail: 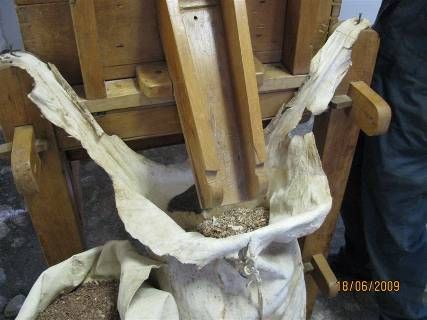 The pegs in the hurstings are plainly visible here. I was keen to note details of the shoe, so recently made by me for Compagnes Drift. I actually couldn't work out the 'rap', with the curve facing upwards. Maybe it had previously worked with the curved face towars the damsel and had worn round, or had faced downwards for the crook string to be attached to: 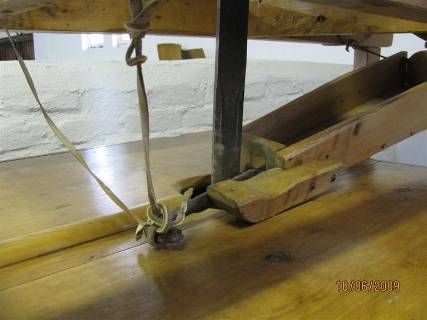 The damsel was a square bar, beaten out to form an octagon; not much shaking from that! The hopper was interesting! We haven't come across this shape before, with a combination of square and pyramid. Look at the width of the planks! 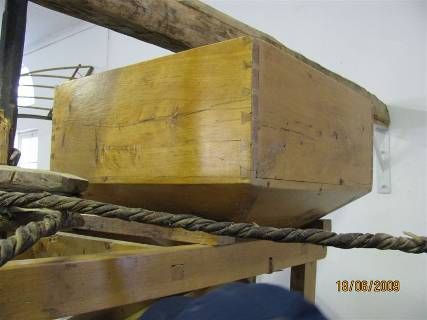 The authentic twisted rope is visible here. There was, however, a wrought iron extension on the rap for the crook string to attach to: 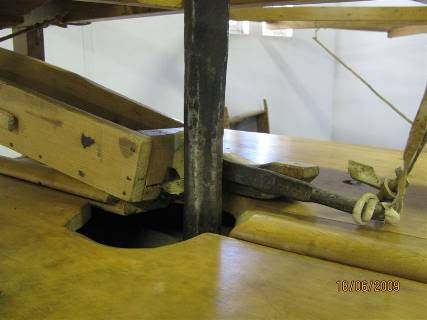 The whole assembly looked as though it could be dismantled and put up again in another location which would make it ideal for trekboere (migrant farmers), needing only fixed points for the top of the damsel (probably also serving as stone spindle) and the top and bottom of the horse wheel. Here, I'm inspecting the tentering mechanism, a lighter screw on this side. 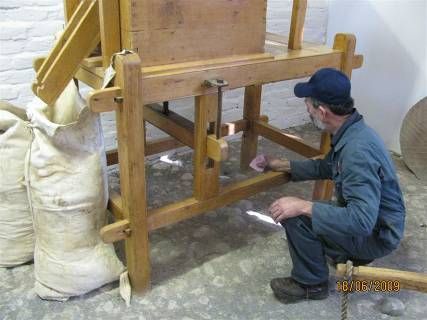 Well, that was different! Not going to the Mill tomorrow, we're having an Open day at our own museum in Villiersdorp!