During the week, I had a chance at the workshop to make up the Damsel. Again, with Walton's book and Kleine Zand Drift as a guide:

His drawing shows three, all examples with four lobes. The one on the right has cams built into the shaft. The Gutmann looks like this, except it has three lobes. Both the others are made of iron bars, probably an older style. Limerick's on the left has a central stem, whereas Kleine Zand Drift at the bottom does not. This made it potentially more difficult to make. I settled on 16mm steel round bar, cut four lengths and bent each end exactly the same amount, then mitred each end, fitted them all together and welded. I could just fit the assembly into the big lathe at work in 4-jaws, then centre drilled and drilled the ends out to 16mm and inserted a straight length from each end and welded that to the assembly. I laid on the weld, to make it look as though it was wrought, and then ground and polished to complete the ruse.

The drive on the rynd is a (fairly) square protrusion, so I cut two lengths of flat bar, welded them in a cross and folded the ends down to make a square socket. The advantage of this is I can squeeze the ends inwards to make a firm fit on the drive. This assembly I also welded thickly to the end of the driving end and ground and polished that to make it look wrought.

The assembly of rear tee, shoe and damsel then loked like this: 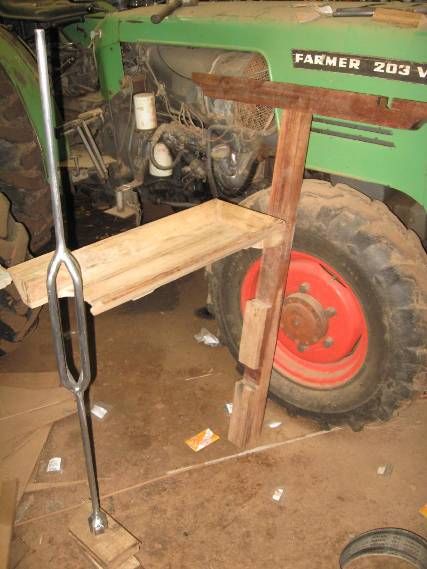 On the way to Movie Club on Tuesday evening, I popped in and offered up the rear tee to the tun, damsel to the rynd and hooked on the shoe. First I checked the rear tee was standing vertical, yes, the amount of sanding-away was just right. There was also a good clearance for the rim of the lid. I found the shoe was too long for the damsel to engage the rap on the shoe in the right place. No great problem, I did that by shortening the wooden lug which the shoe hinges on.

The next problem to sort out was the problem of the meal which was left behind last week between the tun and the bedstone. I had heard that sometimes there is enough wind caused by the rotation of the runner to blow this out, but I wasn't sure in this case with a rotation speed of 64 RPM. I attached a good quality paintbrush to the end of a piece of hoop-iron.... 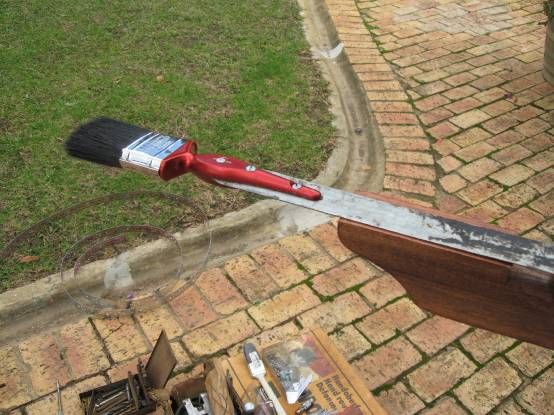 ..... then made a band out of the same material, which can be tensioned on to the runner stone. I had my doubts whether this would hold the strip on the brush firmly enough, so I folded the brush strip over and tapped it down: 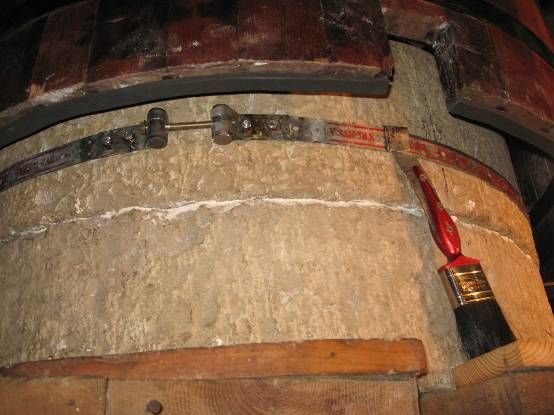 Spot the mistake? The runner rotates to the right! Also to keep the meal inside, I stuck a strip of draught excluder to the underside of the tun. 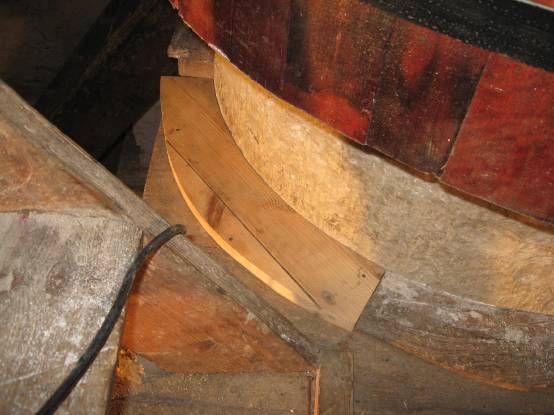 While the tun was raised (the last job for a while, I hope, for the crane beams), I replaced a section of the wooden rim for the bedstone, which had rotted away; it looks as though there was a drip from the roof just here. I found a nice piece of old pine tongue and groove plank for that, the offcut from the inside makes up the curve on the outside!

To remove all crevices in which old meal could accumulate, I mixed up some crack-filler and applied it between these strips and the bed-stone all round. When this had dried off and after a thorough vacuuming around the bedsone, the tun could be lowered, centralised (when this is exact, the off-cuts from the lid are waiting to be nailed down to act as registers) and I could remove the crane which has been there for two years now!

I couldn't resist the temptation to assemble the furniture made so far: 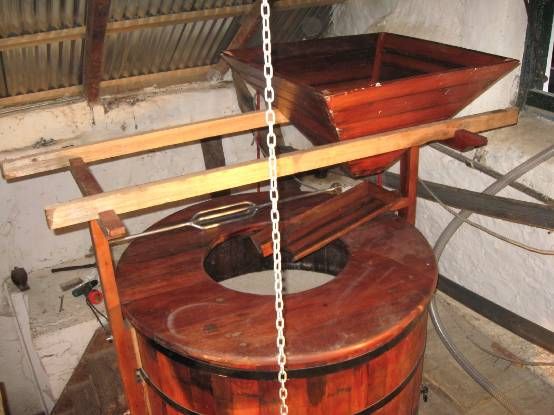 In the week, I'll ask Abie to replicate the fancy ends he fashioned in the tees, in the ends of the longways bars, then those can be slotted to drop into the slots already in the ends of the tees. The mouth of the hopper will still be too far away from the shoe, but I intend to chamfer the bars where the hopper rests; that will lower the hopper, then I can space up the hinge pin for the back of the shoe.

There must still be a supporting cross-bar between the two longitudinal bars to support the top of the damsel. This supporting bearing must be easy to remove, so that the damsel can be lifted out after use and a metal plate put over the eye of the stone; we don't want rats in there! At the moment one of the enamel basins is doing that job!

Everything was then in place to do some more trial milling, particularly to try out the sweeper. Jayne lent a hand to shake in some fresh grain mixed with the residue from last week which had not been properly milled when the stones were too far apart: 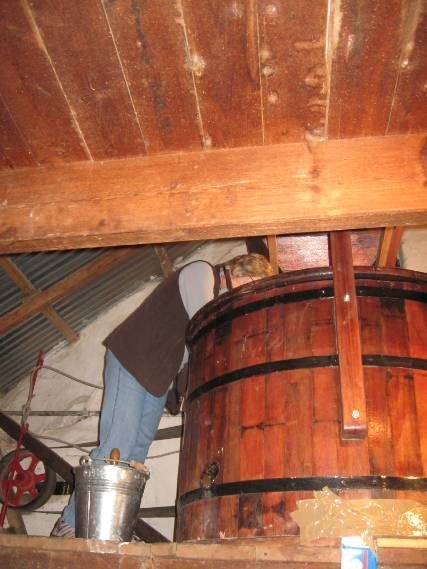 The meal-spout must still be made, but parcel tape helped seal off the outlet from the tun. From the start, it was clear that the sweeper was not working all that well, as only a small proportion of meal was coming out into the bag. That meant a repeat of last week's process of lifting the tun and sweeping the meal out. Before doing this I again vacuumed all round the outside of the tun to remove any impurities. It was possible to save another bucketful of meal from around the bed-stone, leaving some to waste.

The vacuum cleaner took care of the residue, although we'd encountered a problem from last week. The mouth of the discharge tube had faced the wall and a sticky mess was left. Remember, flour and water makes glue! With the end of the hose blowing into an old grain bag, this problem was resolved.

With the tun raised and on blocks for this operation, it was possible to see what the problem was. The sweeper brush was about 40mm away from contact with the planks at the base. It must have swung away so the metal strip on the brush must be attached more securely to the band around the runner. How am I going to raise the tun far enough to do that now the crane is dismantled?

The next step was interesting! When put through the sieve we've been using all along, almost all the meal went straight through! 5½kg of meal went into bags, the remainder one could hold in a cupped hand! That also means, for health-conscious eaters, that very nearly all the bran is also in there, very finely ground!