The race is on to have the mill working, or at least the wheel turning, for Heritage Day, which is this coming Thursday! I was up very early, and after getting my spray driver organised, was on the road at 6am and at Elim well before 8. During the week, we’d modified an existing puller at our workshop with a ring to locate over the end of the Gudgeon on the outer end of the axle-tree. We welded on big chain links at each end to hook chain blocks on to. I always drive around with several of them and lengths of chain and shackles. To protect the wood of the spokes, I had a big bag of thick rags. 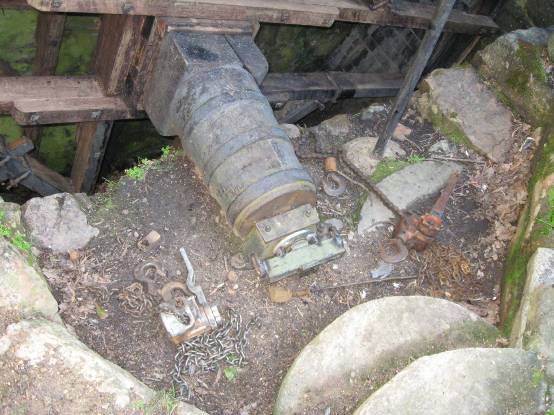 The puller is positioned on the end of the Gudgeon shaft of the axle tree.

I wanted to be able to pull with equal force on the arms at the back and those at the front, and to pull at two opposite pairs of arms, where they cross over one another. In some places, the wheel was so close to the wall that there wasn’t space to feed the chain between the arms and the wall, but I managed to select two opposite cross-overs and made a loop of chain around each, with many layers of rag between the chain and the wood. The other end of each chain was looped around the cross-overs on the outer arms, again with cloths. The chain blocks were then hooked on to the chain between the loops at one end, and on to the puller at the other end, and the tension was taken up.

Ready to pull the water-wheel away from the wall against which it had jammed. The chain blocks are hooked into the free loop of the chain, allowing an equal pull to the rear as well as the front set of clasp-arms. 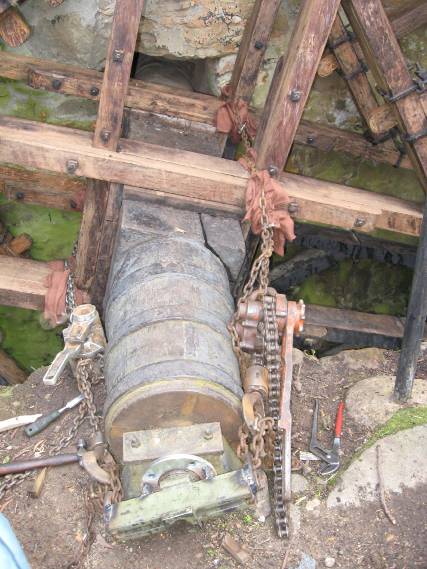 With gentle tension on each chain block we got some movement, but only a bit. At this stage we didn’t know whether the clasp arms would move along the spacer blocks, or whether the blocks would come with the arms. After moving that small amount, the wheel wouldn’t move further, so we investigated. Previously, wooden retaining strips had been nailed to the axle tree inboard and outboard of the wooden blocks. The outer ones we removed and gave another pull. Sure enough, the arms and the blocks moved as one over the axle tree. An inch was all that we needed, not wishing to pull too far, the outer arms have signs of having worn against the outer wall, and I didn’t have tackle to push it back!

Theoretically, the wheel could now turn, but first we wanted to disengage the drives on the ‘stone-nuts’, the small pinions on the stone spindles of each mill. Above each gear is a hand wheel, which obviously works upward on a square-cut thread on the shaft above:

The ‘stone-nut’ shown in the working position. The hand-wheel is turned fully to the left, the full thread is showing above it and the gear is fully down over the cone on the shaft.

I thought that the gear would simply move upwards out of mesh. Not so! Much cleverer than that! Inside the gear a taper is machined with a keyway in it. On the stone spindle is a corresponding cone with a key inset. The gear just has to move upwards far enough for the key to clear the inside taper in the gear!

But to get the hand-wheels to turn was another story! We started with liberal squirts of release oil on the threads and between the gear and the hand wheel. I scribed a line on the hand-wheel hub and the gear, then with a stout piece of wood and a 4 lb hammer, I hit on the spokes. At this stage, we noticed that the right hand one had been tightened without the key engaging in the keyway, so it was jammed. We moved to the left hand one, and it started to move. Once moving, it was ever easier to turn and soon it was out of engagement. Encouraged by our success, we managed to free the right hand one off too. 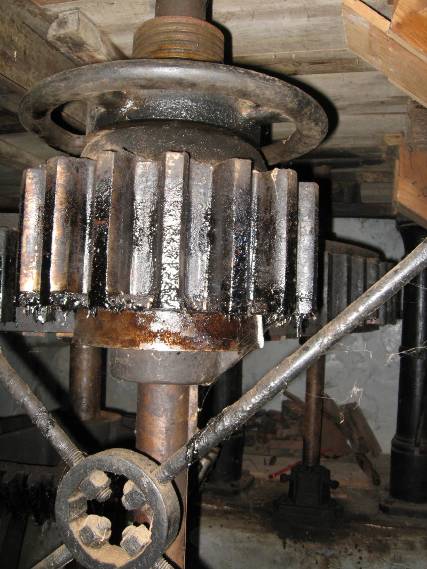 In the picture above, the light is just catching the key on the cone on the right hand side and the gear has been lifted about 40mm off the cone.

We were ready to turn with water! 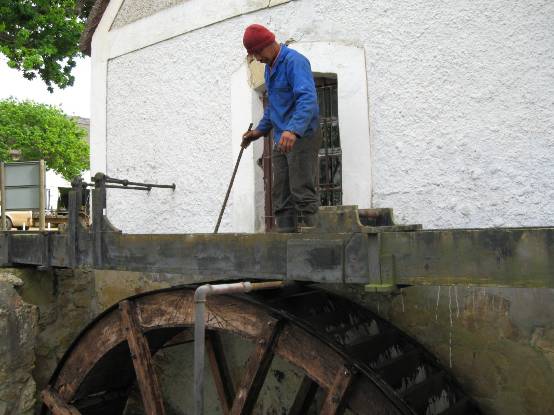 Jeff cleaned out the launder and we set the sluices and allowed water down, first with the trap door in the launder closed, so the water poured out unused against the wall. We then opened the trap door and allowed water over the wheel and it turned properly for the first time in several years! Although it turns very easily there is a lot of noise…. groaning and thumping, and after a while, it just stopped. We stopped the water and turned the wheel backwards to free off the obstruction. There was still debris in the pit and it wasn’t washing away! There was a dreadful stench of rotten water, so we applied ourselves to the tail-race.

With the water ‘off’, I climbed down into the stinking water of the pit and tried to move the debris from under the wheel and down the exit tunnel, but the water level was too high. So we transfered our efforts to the open section of the tail-race beyond the tunnel, where it had grown over. There’s a tree that’s fallen into the tail race and attempts were not made any easier by a swarm of bees which had just moved in, exactly where the worst restriction was! All we could do was to allow copious amounts of water down, to flush out the rubbish. But the water still isn’t draining away and as the wheel is only a couple of inches off the bottom, it’s standing in water L . A digger will be used to open it up properly in this coming week.

We ran the wheel with water after that, observing the wheel and the troublesome bearing on the inside. Jeff pointed out the problem at the centre of the wheel. Where we intend to fit wedges in place of the parallel strips between the clasp-arms and the axle-tree, there is up to 10mm of clearance between the strips and the axle-tree. Every time the wheel goes over, it shifts by that amount with a thump. We spent some time measuring up the best dimensions for wedges, and in the meantime, I suggested Malcolm get pieces of hard-board to slide in when the gap is furthest open. Then to allow the wheel to turn to pinch that, then slide in another on the other side, and so on. These parallel strips are actually prevented from swelling when wet by the fact that the strips from the adjacent edge overlap them. There must definitely be an opening in each corner! Inside the mill house on the wall is a much moth-eaten blueprint of the wheel as last built and it shows no wedges; it was built and fitted as drawn. 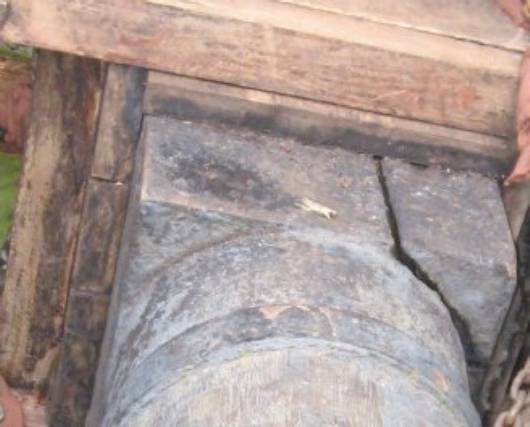 Detail of the wooden strips between the clasp-arms of the wheel and the axle-tree. In the corners, these strips overlap one another and prevent the adjacent strips from swelling to their fullest extent. When we fit wedges, there will be an opening at each corner.

This movement on the wheel causes a severe judder on the axle-tree which is not helping with the problem on the inside bearing. As the wheel turned, we observed how the gudgeon and pieces of axle tree were moving in relationship to one another under the various bands which have been introduced as repairs over the years. 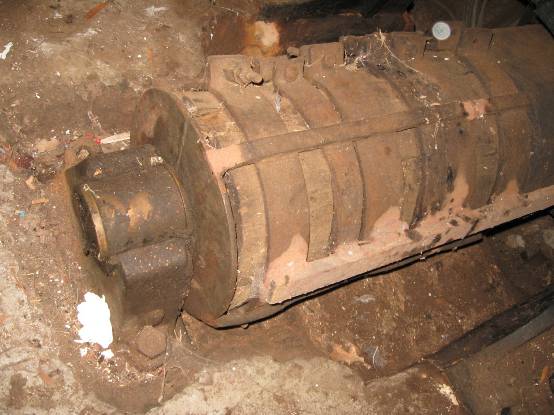 Many repairs have been carried out on the inner end of the axle-tree over the years!

We decided that, without major re-building of the end of the shaft, or replacement of the whole axle-tree, the best bet would be to stabilise all the parts with a modern resin product. I had brought some Epidermix 372, an ABE product well-known in the construction industry. We mixed what was left in the tin and forced it into just one of the gaps, working it well into the crevices, making sure that more could be applied to fill the gap completely. I suggested they get a 5 litre (or kg?) bucket of the same product and apply it and allow it to cure, turning the wheel a bit every time. 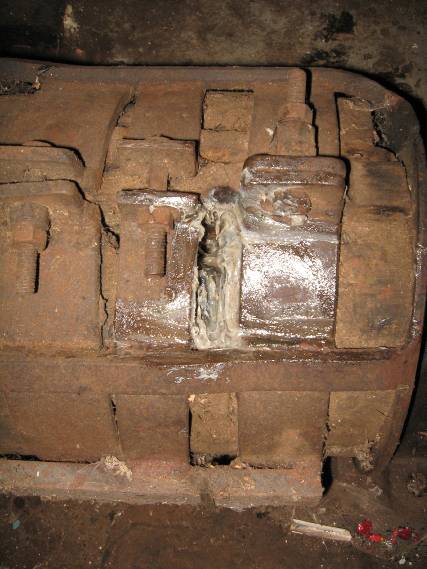 One gap seemed to swallow a large amount of Epidermix 372, yet there is still room for a lot more. We hope that this product will stabilise the end of the shaft.

After a delicious meal, during which we discussed the next steps, we made a shopping list for Malcolm. We hope that enough can be done to make the wheel turn slowly for visitors this coming weekend. We decided the best would be to leave the trap-door in the launder closed and allow the water to pass unused out of the gap at the end. A certain amount of this water does fall on the wheel and causes it to turn slowly.  There were already several groups of visitors during the day; all were fascinated by the mill and the progress being made to get it back into working order.