Some of the 13 buckets which I’d found on the belt at the bottom of the elevator were badly rusted, so after polishing them up and neutralising the rust, I repaired them with a wear-resistant epoxy product we use here for pumps, etc., called Steenvas ST100. By wrapping the outside of the bucket with insulation tape and applying it by finger on the inside, I could re-form the shape. 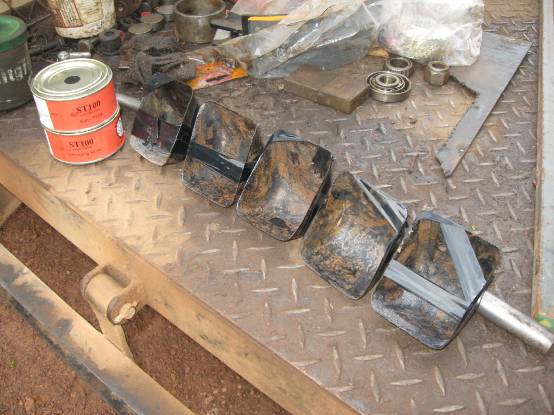 I then gave them and the others a coat of Duram NS5 primer. 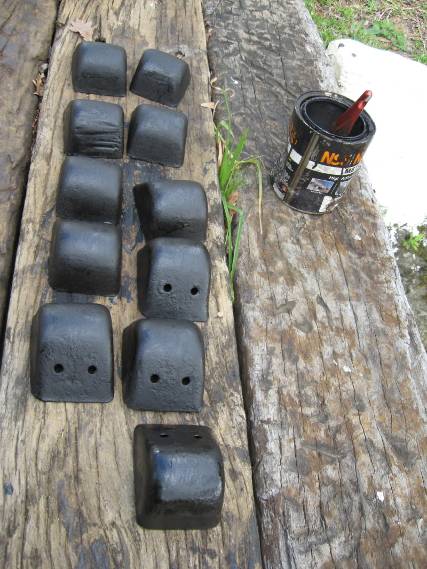 The marks from the insulation tape can be clearly seen on the second bucket from the top on the left. A large area if that bucket was entirely missing.

The holes are not punched accurately as I found out by first drilling the holes at right angles to the belt. So each bucket needed to be held square in position, holes marked, and then punched and drilled. I set up a production line with everything to hand and the job was soon done: 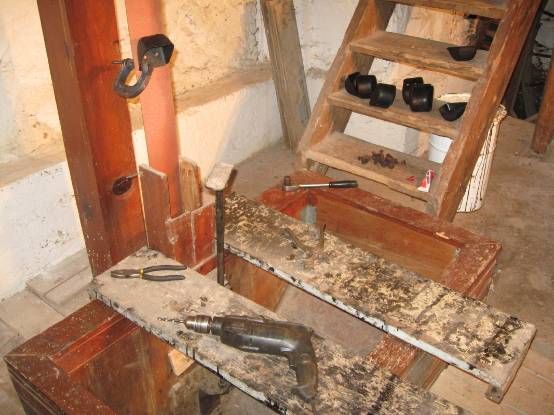 Everything to hand! A bucket is clamped in place, red paint pen for marking the holes, leather punch, drill for opening up the punched holes and ratchet and socket spanner for the square nuts on the special bolts. The heads of these bolts are wide and flat to run over the pulleys top and bottom, and have two sharp spikes which dig into the belting.

A long-unfinished job was next, the guide for the sluice at the bottom of the hopper still needed to be fixed in place. The remains of the old bracket were still there and had to be broken away. Now the Miller can close off the contents of the hopper, or regulate the flow onto the buckets. The fact that there are only 13 buckets doesn’t matter; I can just open the sluice a bit more. 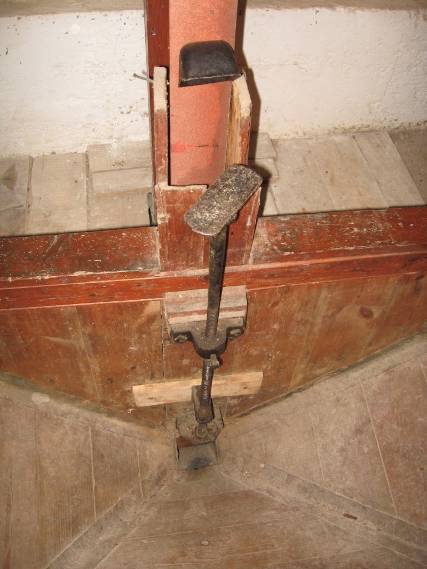 The next stage will be to box-in the front part of the elevator. Hennie Richter kindly gave us some imported pine beams he saved from an old house. I scraped the paint off one and sanded it to see if it could be sawn into planks. Unfortunately there are four old rusty nails right through the middle, which I doubt I’ll be able to remove. However, it’s a beautiful piece of wood, and I have a plan to use it and others as part of lifting apparatus for the Mill-stones. 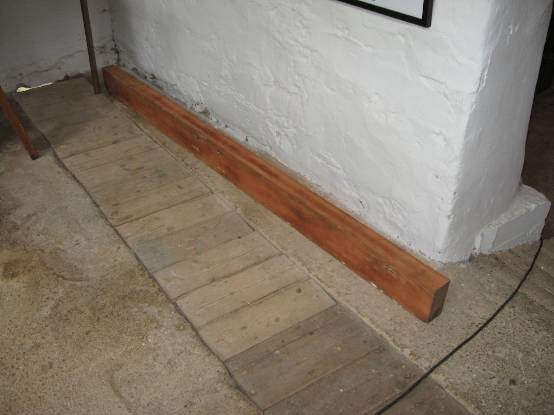 During the day, I set the Vitruvian Mill up to mill a batch of meal, and was just ready to ‘switch on’ when a large group of visitors arrived! Some of them are in contact with the team involved in the restoration of Reichenau Mill in KwaZulu-Natal.

While milling, I had the rest of the line shafting running, so I could observe the elevator working. A small piece of wood fell into the hopper, and kept being picked up and then dropped out of the descending bucket into the hopper again. This is an indication that it wasn’t running fast enough for the piece to be flicked out into the delivery chute at the top.