Sandstone Sentinel S4, which was acquired as a result of an agreement between the Sandstone Heritage Trust and the James Hall Museum of Transport in Johannesburg is now nearly complete. It was acquired 6 years ago and went into the steam restoration queue. The job was allocated to Keith Stevens, a stalwart supporter of ours who has done much good work on traction engines, locomotives and other items. This was a tricky job.

This steam truck had not run for nearly 50 years and required an immense amount of ingenuity and engineering skill. Keith's great asset is that he is able to tackle boiler work, woodwork, chassis work - in fact everything that has
to be done.

As the pictures clearly show this long labour of love, which has taken nearly two years, is nearly complete.
The Sandstone Heritage Trust has been fortunate in receiving a lot of support from the Sentinel Drivers Club in the UK and in particular from George Timcke (This email address is being protected from spambots. You need JavaScript enabled to view it.) who has been invaluable in assisting us in acquiring parts and in providing in-depth technical support information.

George has offered to come down to South Africa to run a driver's course for the S4. Tentative plans are in place for this steam truck to drive under its own steam from Howick in Natal to the Sandstone Heritage Trust in the
Eastern Free State, a distance of some 350-kms.

As always the pictures tell the story...

With the sale of our modern Bell dump truck at Sandstone Estates we have reverted to using vintage and classic items. The workhorse on the farm at present is our 1939 Scammell Dump Truck. This 20-ton dumper fitted with a Leyland 680 engine does a highly competent job and produces a daily output, not much lower than a modern machine of similar specifications. 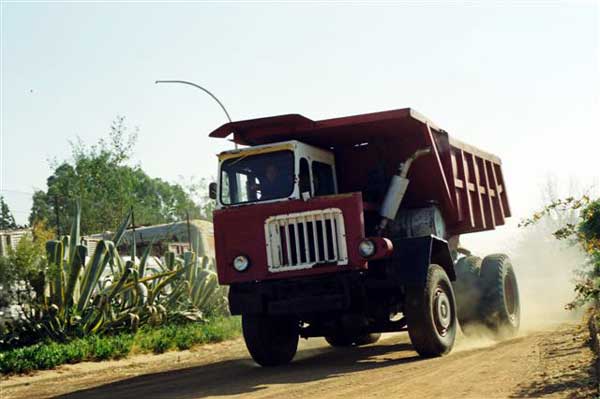 HTN 125 - Sentinal S4 steams its way into the history books!

One of the items held in much affection by employees and visitors to the Sandstone Heritage Trust is our AEC Regal Bus III - 1950.

Here she is in her new colour scheme.