Another piece of good news is that the Steam Tug Alwyn Vintcent has been saved for preservation!

In a move which is set to raise awareness of Preservation in South Africa to a new level, the vessel has been purchased by the Villiersdorp Branch of the West Cape Tractor & Engine Club! 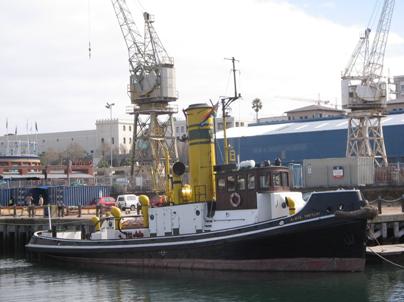 'Villiersdorp??' you may ask.... 'That's no-where near the sea!' However the overriding reason is the group of Members and what they have managed to achieve so far.

But this story starts two years ago when the vessel was bought from Iziko, the National Museum Authority by an Australian for a small fee, thus saving her from scrapping for the first time. He contracted people to cosmetically restore her and there is a dispute about payment for those services, yet the restorers continued with the restoration to a high standard and mothballed the machinery with grease and lacquer, so that two years later, at least inside, the equipment is as smart as the day they left and locked up behind them.

Since then the exterior of the vessel has become shabby, and the owners of the Victoria & Alfred Basin need the space for marinas, and she was up for scrapping again. An appeal was posted on the Sandstone Heritage Trust website which was picked up at the last moment and a meeting was held on board at which the Villiersdorp Club was suggested as the body to take her over. 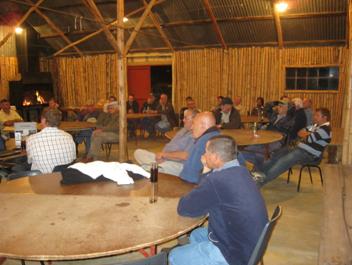 A meeting was held by the Club at which a unanimous decision was taken to take on the project, even though it's not a Tractor, even if it does have Engines inside! However, the Club's mission is to Preserve and this vessel is the last Steam Vessel to be on the South African Register. Everybody realised it would be a big budget exercise, not only at the beginning, but also in the long term, as maintenance will be ongoing.

Meetings have been held with two Cape-based heavy haulage and lifting companies, ALE from Firgrove and MME (Machine Moving and Engineering) to discuss the logistics and cost to move the vessel, probably via Hermon, Wolseley and Rawsonville, to Villiersdorp, a route of 220km. 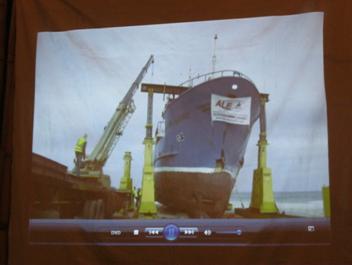 ALE and MME combined forces to rescue the fishing vessel Seawin which ran ashore at Melkbos two years ago.

Negotiations were entered into with the Australian owner, in which he accepted that the difference between what he wanted and what he accepted, would be looked on as a donation towards the saving of the vessel from the scrap-man.

Unlike the sister-ship Eaglesham which had her bottom cut out to display her at the ill-fated Midmar Dam Museum, necessitating her scrapping when it closed down; our intention is to keep the vessel complete and potentially seaworthy. 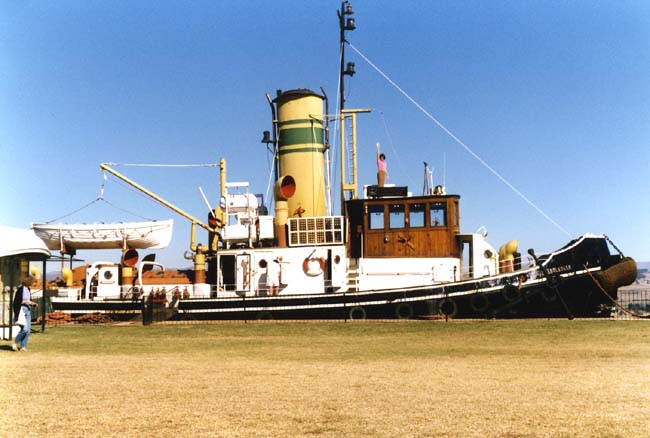 She will be prominently displayed on dry ground, so that she could possibly one day be put back on the water, perhaps on Theewaterskloof Dam. Certain cutting and dismantling will be necessary on the superstructure to be within certain height limits for transport, but that will be reinstated after the vessel is in place.

Massive publicity will surround the move, which is likely to take three days. Sponsors are needed, who will in return get major exposure during the move and after the vessel is positioned in Villiersdorp. A bank account, supervised by the Accountants of the Villiersdorp Co-op, has been opened and donations are welcome. Here are the details: First National Bank, Villiersdorp Branch code: 200712, Account Name: Steam Tug A-V, Account number: 62286836881. Money is rolling in already!