We had been given a permit from the Department of the Environment to remove the cormorants from the vessel, between 4th and 13th December 2010, so we could not afford to waste any time. The actual removal had to be performed by members of SANCCOB, the NGO responsible for Coastal Birds.

8th December suited them so five of us from the Villiersdorp Tractor & Engine club, who now officially own the vessel, took the day off and we set ourselves a busy schedule!

First, we were to help the SANCCOB people remove the chicks and eggs which they will hand rear or hatch. We would help them remove a few nests to investigate for parasites. 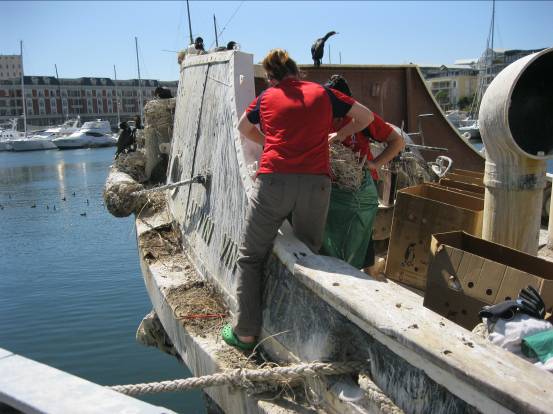 The girls were quick and professional. They had the correct boxes to take the chicks and eggs away in and within half an hour, they had done all they could and were gone to deal with their next crisis.

We had also been asked to remove the remainder of the nests and to pack each into an individual plastic bag for the scientists of the Department of the Environment, so they

could investigate what materials the birds use. Many pairs of specatcles were found even by us in the removal process, how many more were inside the nests, we didn’t discover. We found many of the quick-coupling traces which the Long-Line Tuna fishermen use along with some impressive fish-hooks. While Marlei and Nicky from SANCCOB were there, the latter was delighted to find her native Welsh flag in one! 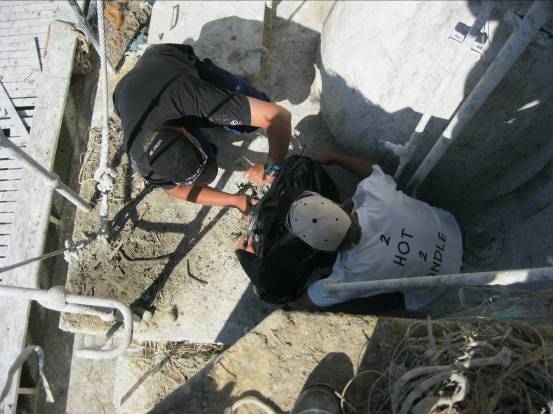 Andries and Daniel Burger shoe-horning as nest into a black rubbish bag.

The remaining material is made out of fishing tackle, rope, wire… we even found a welding rod! These birds must be like magpies! We left piles of bags of nests next door on the SAS Somerset as instructed.

The next big job was to clean the vessel! We had two high pressure washers and suddenly surfaces covered with white guano changed to Teak, black, yellow with the action of these machines. Try as we could to avoid it, we were soon covered in excrement from these messy birds!

We first cleaned the deck and gunwales. After those were reasonable, we tackled the upper surface, which meant that the lower decks were dirty again. However, this was easy to swill off with a normal hose. 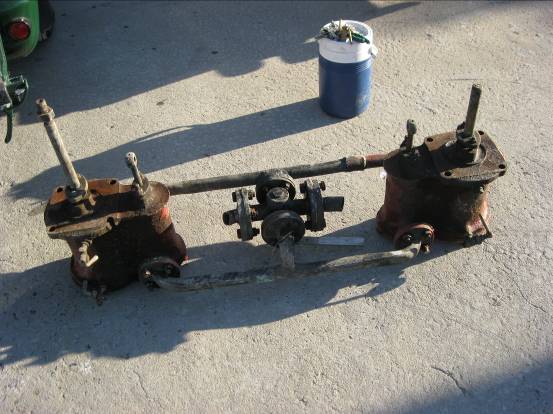 Our next chore was to remove as much loose stuff as possible. Above is the cylinder unit of the front anchor winch. It was a heavy load for four of us! 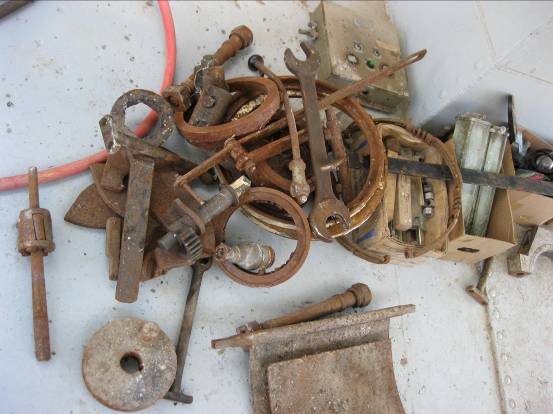 We were pleased to find the expanding tool for the boiler tubes, (above left) and in scratching around, we identified more of the winch engine; the disc and pin in the picture above is the overhung crankshaft, next to it is its con-rod! 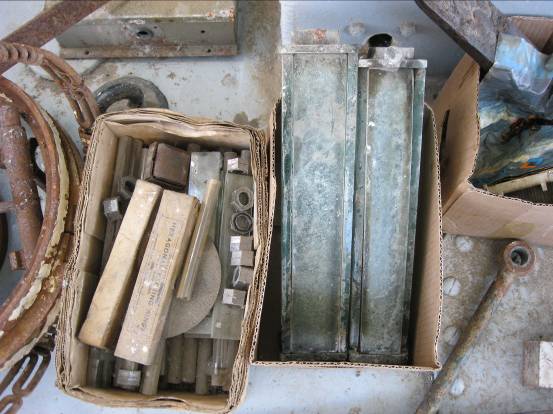 Gauge glass tubes on the left and hexagonal packings for them. On the right are spare gauge glass covers. 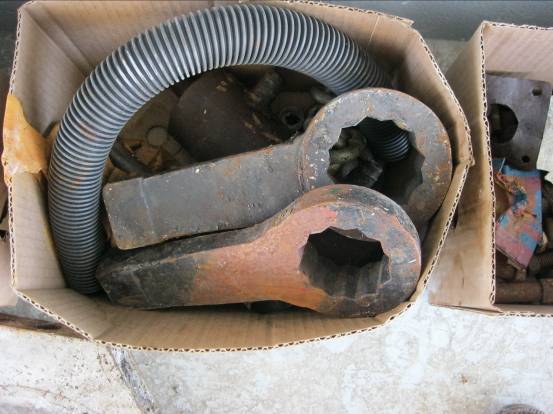 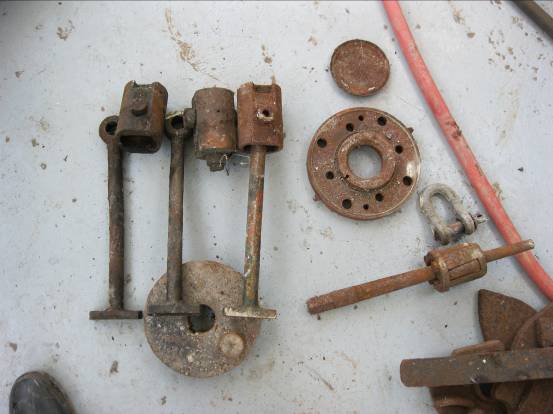 Conrods and trunk-guide slides for the winch engine.

We probably removed, by hand, about a ton of metal! This meant heaving the parts and tools up on to the deck of the SAS Somerset Boom Defence Vessel, then across that and again, up on to the board-walk quay. A carry of about 100m followed to get to our vehicles!

The next huge job was to enclose the entire vessel with shade cloth! The cleaning had started at the front and was continuing towards the rear so the rest of us started covering the vessel in the bows. 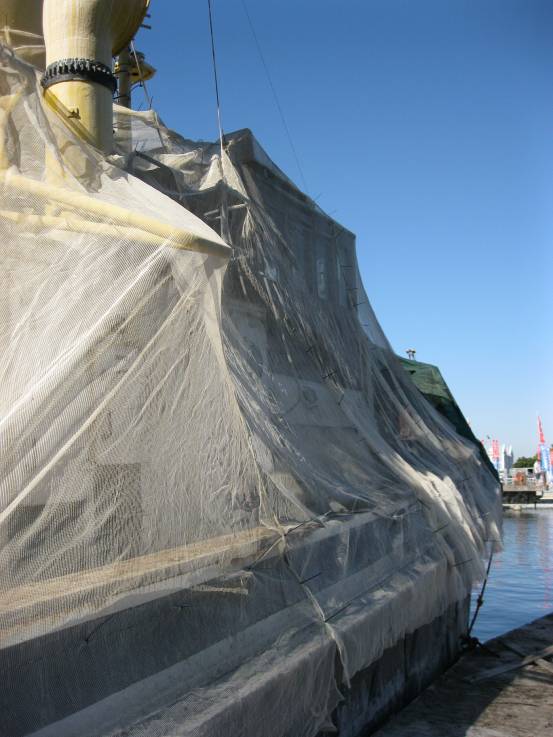 Something like 400 cable-ties went into tying the sheets together. We stretched a ski-rope all the way around the gunwales and tied the edges to that, allowing a bit to hang from there. 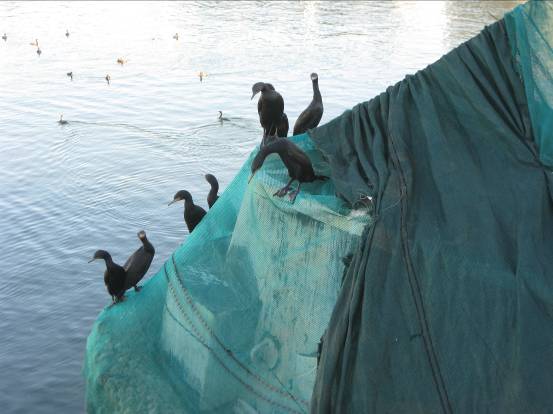 And before we left…. they were back! The birds had been watching us all day from the water and from quays. As we came back to the vessel after carrying the last heavy object (the double steam Salter valve), we counted nine birds on the net at the bows.