HTN 9 - Wishing you all the very best for the festive season!

Usually we see our steam locomotives from the lineside hauling loads of freight or passengers through the beautiful Eastern Free State countryside, but this shot shows a driver's eye view from the footplate of the Lawley approaching the loco shed with a Garratt on the other track. 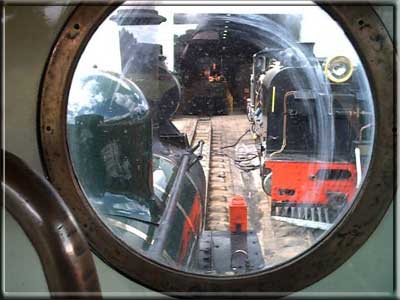 
Cosmos time at Sandstone - Before the storm A very interesting article about PietSerdyn of Kleinkarnmelksvlei, near Moorreesburg in the Swartland, and his passion for Wagons. Article copyright from Village Life Magazine. Please contact them directly if you need any further information.

This is an Adobe PDF file, if you don't have Adobe reader, download the program below.

1716 Moore St, Stanford (down the main street through the dip, left into Moore, past the old cemetery and the wild olive hedge, before the big oak, on your left).

Email The Editor: This email address is being protected from spambots. You need JavaScript enabled to view it.
Visit their website here >>

During the recent Cosmos Festival the Sandstone Heritage Trust in association with the School of Armour put on a demonstration of classic military vehicles which were shown to the public. In addition a special military train was commissioned whereby a select cross-section of military vehicles, largely dating back to the Second World War, were loaded onto a train in order to provide a photographic special for a large number of international steam photographers who had arrived to cover the event.

This successful event has led to an arrangement whereby Sandstone will be cooperating with the School of Armour Museum Bloemfontein to assist in the restoration of classic military vehicles which will ultimately be placed in the museum and which will also be put on parade as part of the museum's ongoing social awareness programme.