Stettyn Cellar is just 16km north of Villiersdorp and every year the Botha family ask the Villiersdorp Branch of the West Cape Tractor & Engine Club to bring old tractors and implements to add to the general interest, for their Family Day. This year it was held on 21st November. Bushel baskets are filled with wild flowers, complementing  the festive look of the farm. 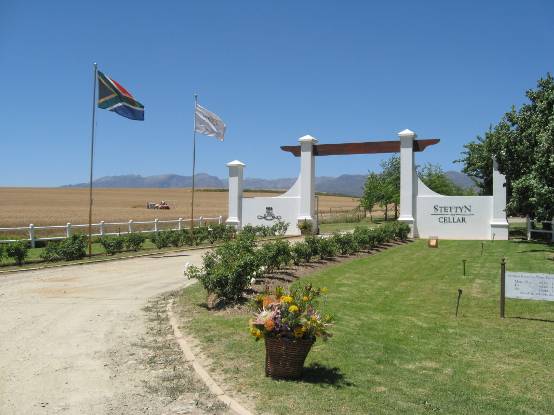 A section of ground next to the road was prepared for those who wished to plough. On previous occasions the ploughs battled to bite into the ground. 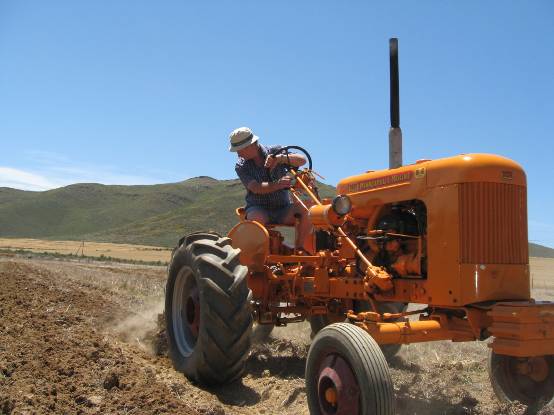 Even Eniel Viljoen’s relatively light Minneapolis Moline BG with mounted plough managed to turn the soil with ease! Carel Kloppers is on Eniel’s much heavier Landini single cylinder with a trailed 2-furrow plough. 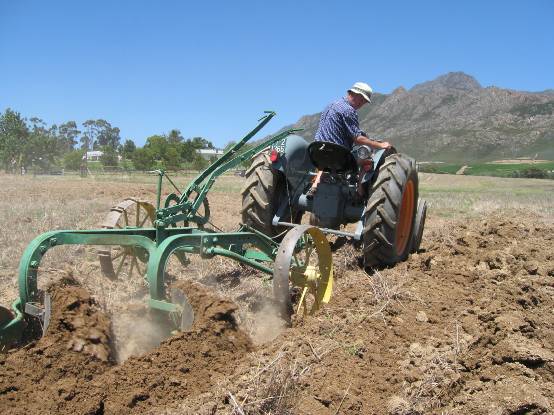 George Botha was taking visitors around the farm in a specially-built tourist trailer. 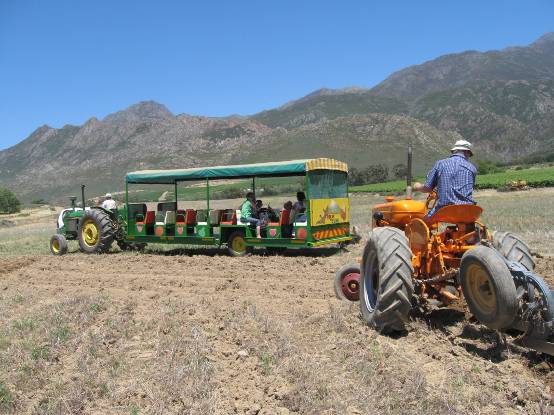 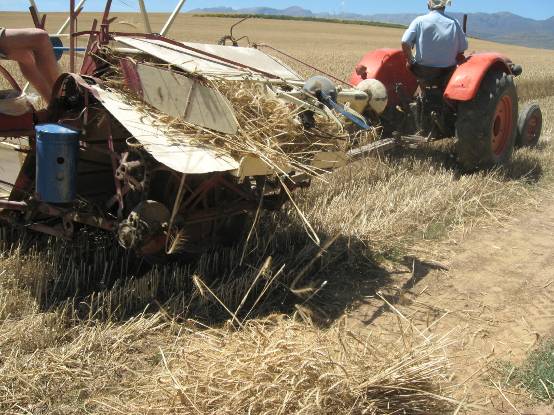 This is a true horse-drawn implement. On close inspection the guide for the reins and socket for whip can be seen! I got a chance later to operate the machine myself, really only watching for sheaves which had not been properly tied. The wheat was standing thick and tall, but with ears hanging, so the shepherds-crook shape of each stalk was making some of them hook up on the machine. 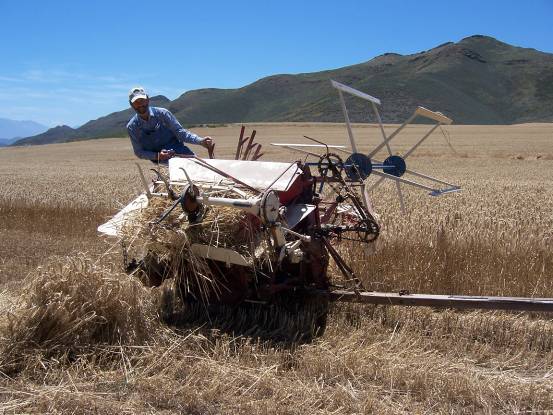 The machine was so well set-up and the crop so even that the sheaves were being ejected in neat rows! The machine senses when the sheaf has reached a certain size before ejecting and tying it at the same time. 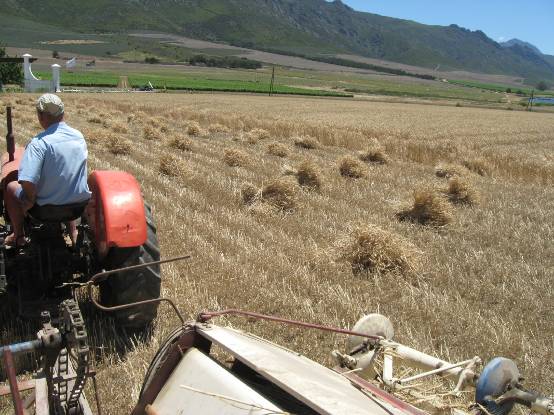 Up at the Cellar, there was plenty more to look at, for the children the inevitable bouncy castle and water-slide. Once again Helderstroom Alpacas were displaying their animals as well as garments made from their wool….. and their manure! 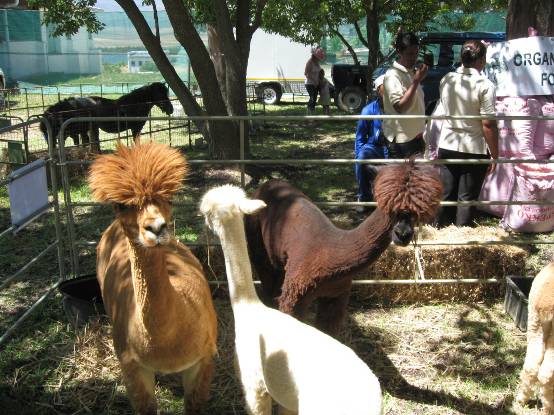 We had a delicious meal in the shade outside the tasting room, but all the time I was watching for the tourist trailer taking visitors towards the Water Mill. 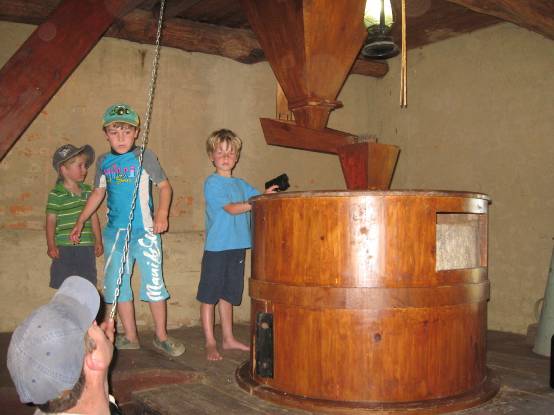 I have heard that Hans Fransen had mooted that the present set-up might be a replacement for older machinery. Certainly the Victorian-looking gears and bearings correspond with the 1891 date which the Bothas claim the mill was put into service, according to this snippet from the Worcester Standard from that year, describing a cricket tour visiting the farm.

…. After which the men visited different parts of that delightful farm accompanied by their host who took them to the Mill house now in the course of erection, about 80 yards from the homestead, where a corn mill, with one pair of grind stones will (D.V.) be in good working order within a month hence, which promises to bring in a good return…… 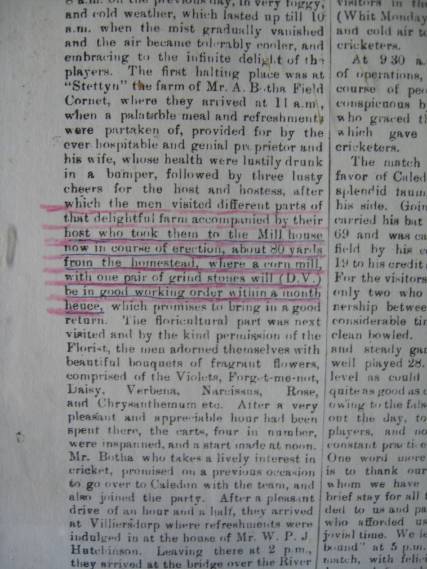 The cutting goes on to say:

… The floricultural part was next visited and by kind permission of the Florist, the men adorned themselves with beautiful bouquets of fragrant flowers…..

It seems that the floricultural tradition has continued; the view of those 80 yards between the Mill and the Homestead is stunning! 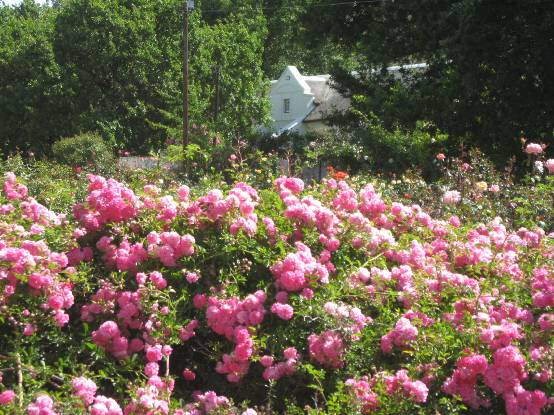 But what about the possibility of earlier machinery? The newspaper says that the Mill house is in the ‘course of erection’, but could there have been a Mill here before? Certainly the Pit Wheel could not have been any bigger than the existing one. 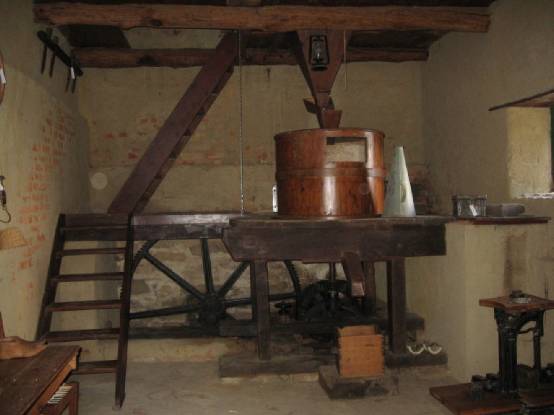 On the outside, however, there is a clue to some re-building on the wall to the left of the water-wheel; a diagonal join in the stone-work. 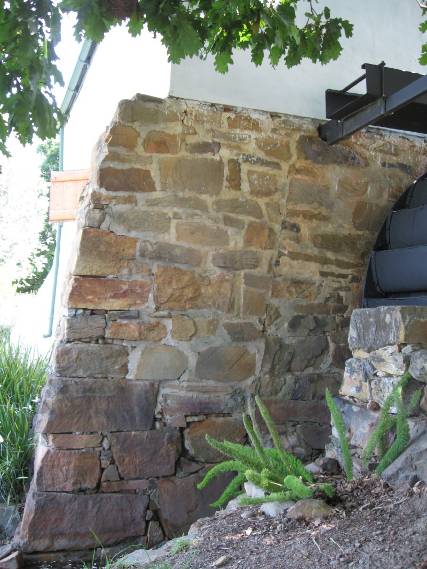 This makes it look as though the wall on this side has been rebuilt to make the building wider. At the other end of the building, the door is offset and a distinct join can be seen. However, I could not see anything which constitutes proof that this machinery replaces a previous Vitruvian arrangement. 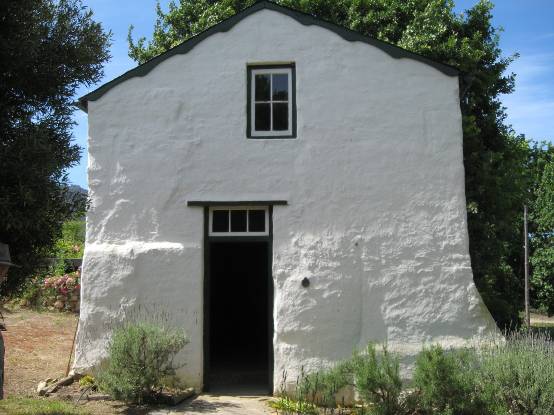 I was fascinated by the operation of the rotating damsel, made of two steel angles working on the steel-lined rap. The whole shoe vibrates fore and aft, supported by a wooden leaf-spring behind. A slide in the hopper neck does the coarse regulation. 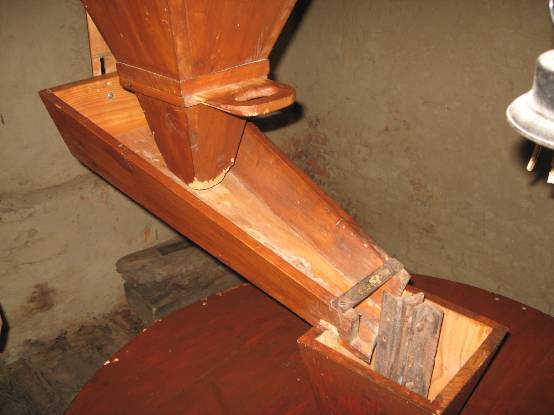 The walls of the Mill house are covered with interesting artefacts, and the restoration has been sympathetically done, not destroying the old graffiti, which just shows graffiti artists have not changed over the centuries! 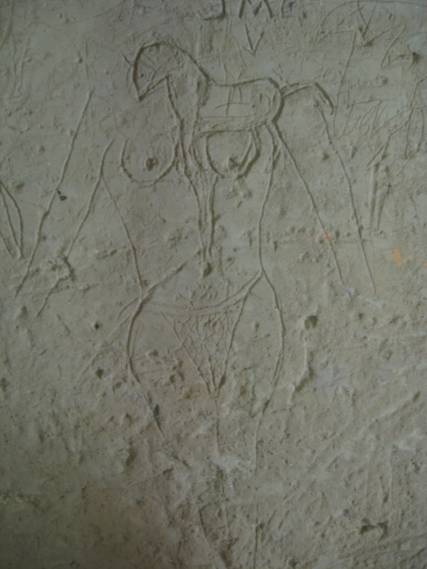 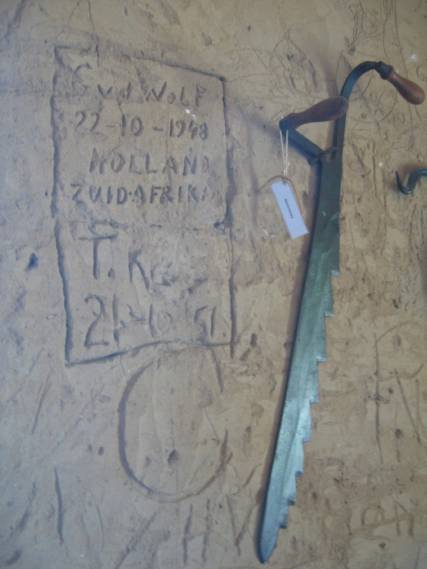 To the right is a hay knife, while below is a beautiful example of a sack scale. 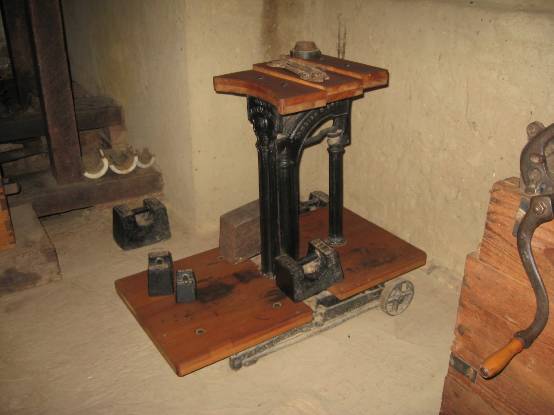 A spare (or used up?) runner stone shows the Miller’s personal choice of harps and cracking. 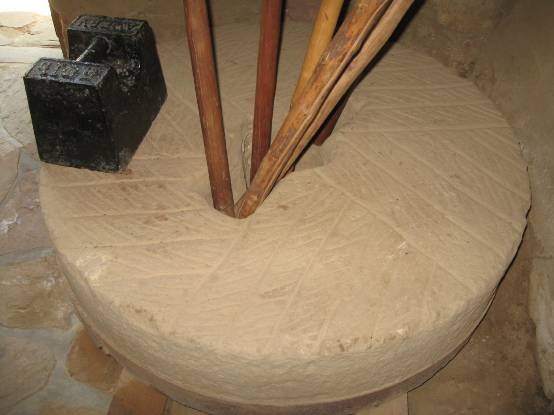 Always interesting are ‘before and after’ photos; in this case the most recent restoration. Top 1977, bottom 1978. 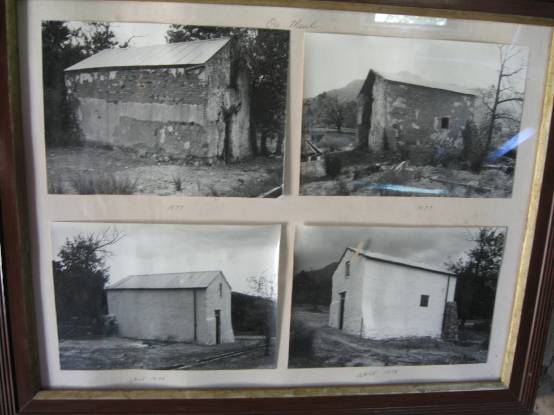 Full marks to the Botha family for rescuing this one from the brink of dereliction! Many thanks to them also for a wonderful day!