Last week’s start at stone-dressing was hampered by having to come home early, but perhaps it was a good thing. During this last week, I have made contact with Michael Stoate who is a 5th generation miller, and he not only does stone milling for a living, but he has been dressing a pair of stones this week! He has not only been able to answer all my questions, by return of e-mail, but has answered un-asked questions by sending detailed photographs of what he is doing. He runs Cann Mills, Shaftesbury in Dorsetshire http://www.stoatesflour.co.uk/

Questions like how deep must the groove be? What angle should the sloping edge be? …are all easily picked up from the photos. 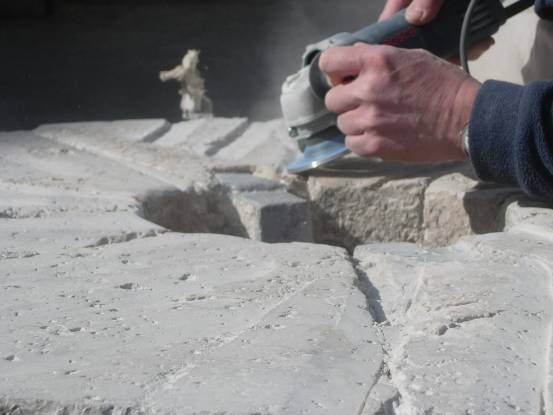 More important from this picture was, what is that disc you’re using? It’s a diamond-impregnated masonry grinding disc, and one was immediately sent for and arrived overnight from Johannesburg!

Michael also introduced me to his ‘staff’, a straight-edge, made of four oak planks around a plywood core. The staff is checked against a machined cast-iron face for trueness, then painted with red oxide mixed with water, allowed to dry, the rubbed over the stone surface to check the flatness of the ‘lands’, the area between the grooves. 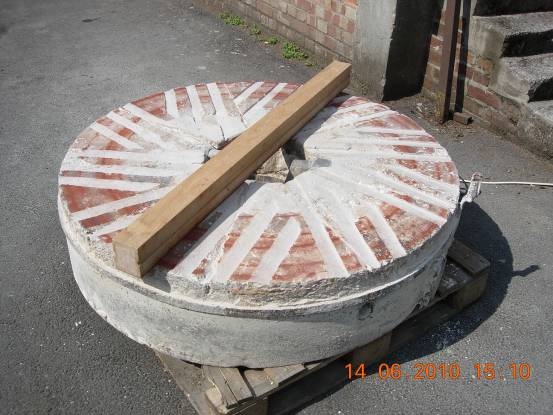 My next query was about the ‘cracking’, or fine lines between the main grooves. Michael explains that it depends on the hardness of the wheat (we still need to find out whether this SST68 is hard or soft!), the texture of the stones, and the product you want at the end. I found a picture I had been sent years ago of a well-dressed stone lying abandoned on Sandstone Estates: 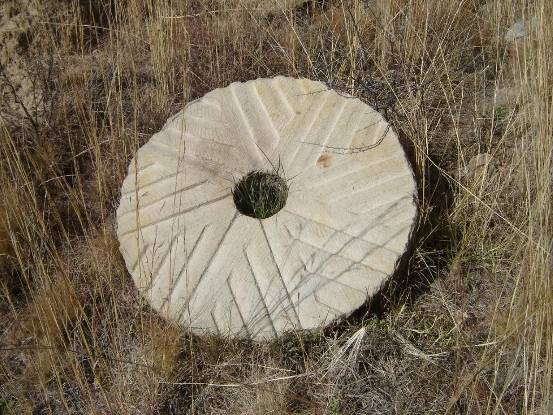 This stone has diagonal cracking, yet it’s in exactly the opposite direction to what I started doing last week, based on what I observed on the existing surface. These would tend to work the meal inwards, mine outwards. Michael does describe this pattern above as strange. Mostly, cracking is parallel to the grooves, but what about the lines I had observed? Today I photographed the bedstone before dressing it, just to remember what it looked like ‘before’. 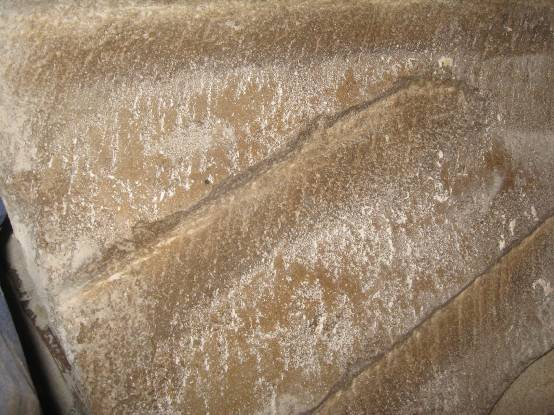 This stone would last have been dressed perhaps 50 years ago, definitely not with a grinder, so these would be lines left by the ‘mill-bill’, or double-ended chipping hammer. On Michael’s advice, I trued up the ‘leading’ edge with a plain cutting disc, then used the diamond cup disc for the sloping part. Because the ridge between the trailing (sloping) edge and the ‘land’ (flat surface between the grooves) is more even now than when done with a mill bill, and in consultation with Michael, I continued with my diagonal lines, just over this edge. 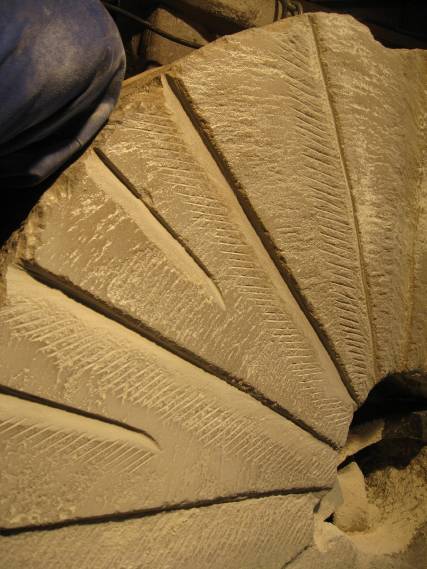 The runner had the short dagger shaped grooves made around about a third of the circumference before stone dressing was abandoned on it, so I completed the circle of ‘daggers’, again breaking the edges with diagonal cracking. The space between the cracking is about 10 to 12mm. One dagger in the picture above must still have the cracking done.

All the ‘daggers’ were already there on the bedstone, as if they had been there all along…. So why were they missing on the runner, I wonder!

This particular stone-dressing pattern I haven’t seen in any book, yet it must have been popular at this Mill, because all the broken fragments outside have the same format. 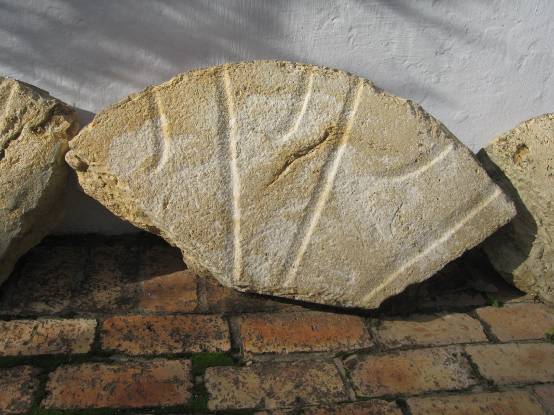 The dressing operation took several hours, yet I can imagine how long it would have taken with a mill-bill! Everything is covered in very fine dust, as there was no opportunity to take the stones outside and work on them there! 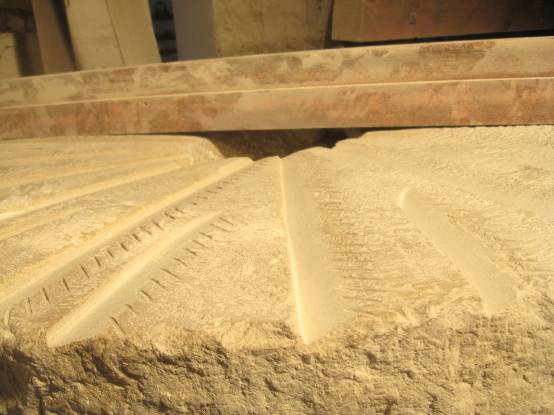 Michael said he makes the runner slightly concave. My ‘staff’ still needs to be trued-up, there’s a twist in it, but the edge is straight enough. It seems that somebody else had this idea, because it’s concave anyway! 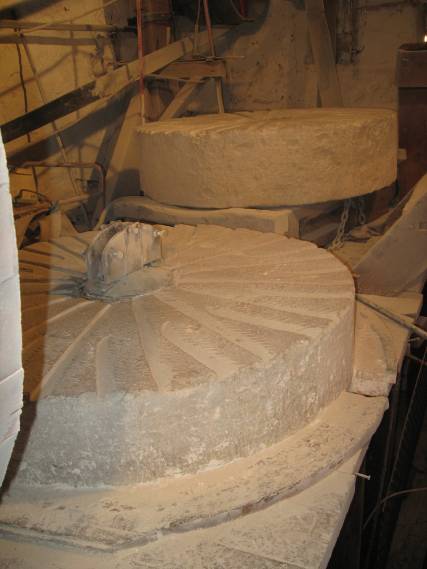 This is the view as taken by James Walton more than 36 years ago, the caption stating that the stones were opened for dressing. Well, now, perhaps 50 years after they were opened, they’re dressed!

Before going to the Shunting Shed, a local pub to attend the launch of a new local newspaper, Bot River Talk, I was able to brush both stones vigorously and lift the runner on end and tip it over. Working with the crane beams and the chain block hanging from the sliding cradle makes this job very easy! 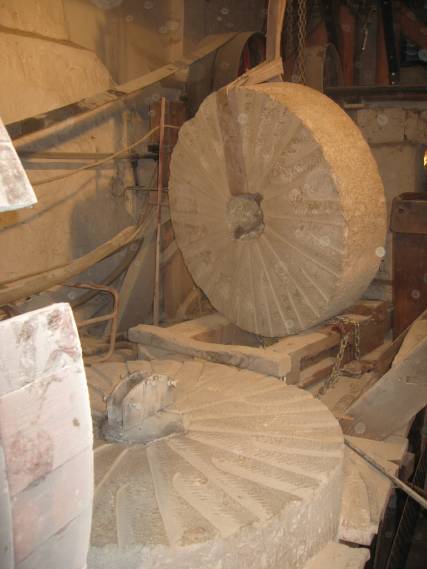 The wooden ‘cradle’ as described by Walton, also makes the handling of the runner much easier than working on the plain floor! 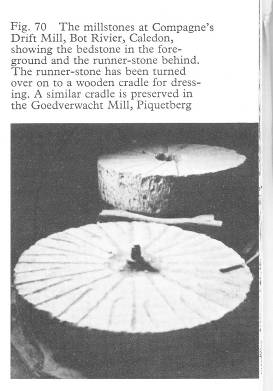