My first surprise in arriving at the Mill was that the flap covering the hole for the meal-spout was hanging open. Had it been opened by rats? 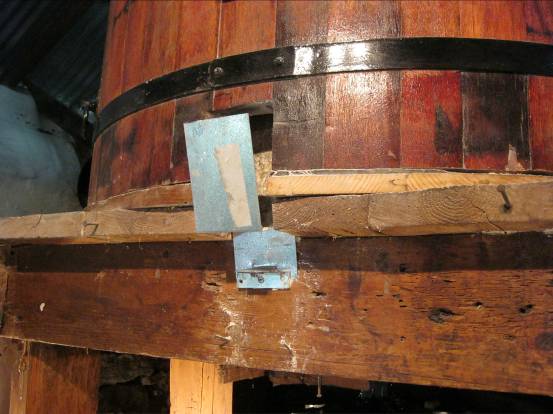 Actually, there was plenty more for any rat to have eaten without having to climb in here, and there was no sign of any rodent activity anywhere. Maybe the owls have the population under control?! There was no evidence of rats inside the tun, anyway. The flap hadn’t hooked in well on Tuesday when I closed up last. Now it’s bent in such a way that it stays upright and closes the opening up well.

The next surprise was the wheat! We have been getting extremely clean wheat for the last couple of years, so to find husks and other seeds with the wheat was unexpected. 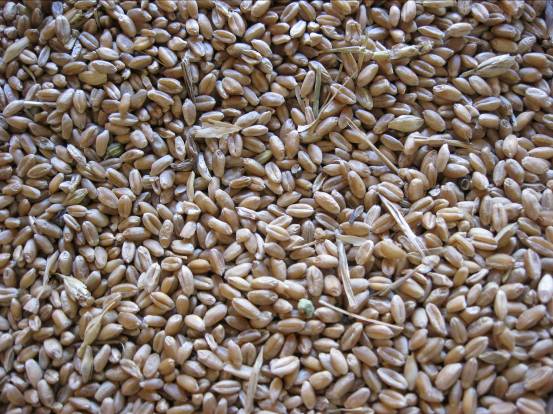 Just yesterday, I received a copy of a book, first published in 1904, on the advice of UK farmer, John Sawle; the Technics of Four Milling: A Handbook for Millers, by William Halliwell. Chapter II deals with Cleaning Machines, and starts with the words: There is one paramount consideration running through the art of flour manufacture, and that is, Will the flour make good bread? Good Bread cannot be produced at random, and the first step towards the desideratum is good flour: flour which will, when supplied with a certain amount of moisture containing gaseous substances, cause the elastic walls of the gluten cells to be distended and the dough to rise, and at the same time become light and porous in texture, pleasant to the eye and palate, and easy of digestion… it goes on to say: To state it roughly, wheat is mixed with various kinds of seeds, oats, maize, barley, straw, rye, cockle, sand, mud balls and stones, and it is the duty of the screens to get them out and leave the wheat perfectly clean.

There was a reason for the sudden change in quality, when Jayne went to collect the next bag of wheat from the co-op as usual, she was informed that they were no longer offering the service of ‘holding back’ grain, and told that all members had been advised of this before the last grain was shipped out. The only suggestion they had was that Jayne buy from Golden Ridge Millers, some 30km further beyond Caledon. We have had a bag from them before for a Tractor & Engine show, and it was similarly impure. I laid some out and didn’t find stones or anything harmful, just the husks, sticks and other seeds. 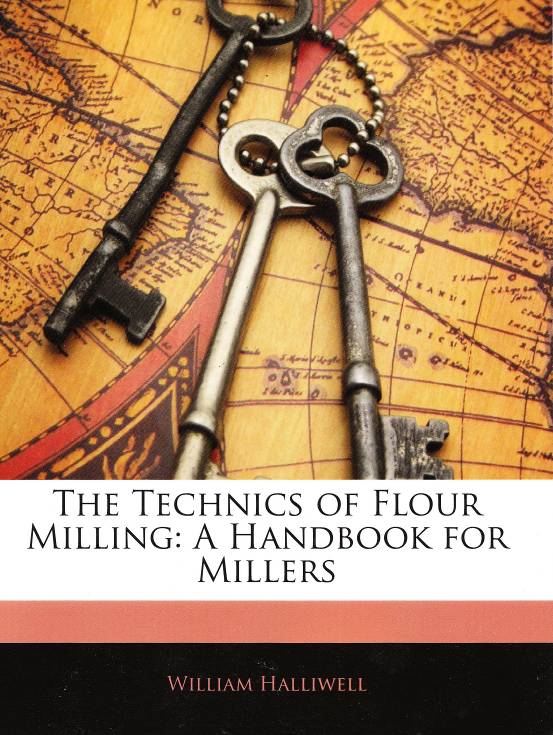 I decided to dispense with the ‘conditioning’ by spraying immediately before milling. The evidence is mounting that a 24 hour period is required for the moisture to soak in, and that we’re milling too wet anyway.

Another change came about as a result of a direct question in this last week to Michael Stoate from Shaftesbury, who helped me with the dressing of the stones recently: http://www.stoatesflour.co.uk/

I have been wondering since about the fit of the rhynd into the ...... (Forgotten the correct word for the thingy on the top of the stone spindle). The second picture in this report (125) shows what I made, by guesswork, quite a long time ago, because that item was missing. I have since seen an original on another mill; it is a large conical lump of cast iron with a tapered square hole in the bottom and a slot across the top for the rhynd and no means of adjusting the run-out on the stone. That is was what I attempted (fairly successfully) to do with my contraption. It's all dealt with in one of my reports.

There are two set screws bearing upwards on the outer ends of the rhynd which are only accessible when the runner is lifted for longitudinal adjustment and the others for lateral movement which you can see in the picture. I also have a tool; a rod with a datum line on it which passes through a vertical hole in the middle rhynd to make sure the button on the end of the stone spindle is fully into the indentation under the rhynd in the middle, to make sure the runner is fully 'home'.

My question is: is all this necessary, bearing in mind the original one I have since seen? Is there in fact normally a bit of play which is corrected every time the runner comes down onto the grain?

I have always known the thingy on the top of the stone spindle as the ' mace ' but I am sure it is known by other names, especially if it is dropped on ones foot! As you mention it is a solid lump of cast iron. The rhynd sits in the mace and there should be plenty of rocking movement to allow the runner (which of course has been perfectly balanced!) to find its own position and the weight of the stone exert enough pressure to grind efficiently.

I have never known the runner to be ' locked ' in position and personally I don't feel it is the right way to go.

So the first thing I did was to remove all the lateral adjusting screws. I will remove the upward-facing screws next time I have a reason to lift the runner, not before! 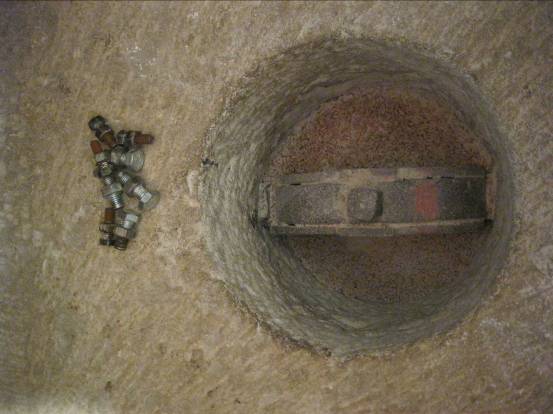 I first ran the tail-end of the previous bag through the mill, and after sifting and weighing it out, I found that the losses through the choking-up of the stones, the dressing and the recommissioning, had amounted to no more than about 4 or 5kg. The motion of the runner seemed to be smoother with the set screws removed.

The meal had a strange look to it after sifting: 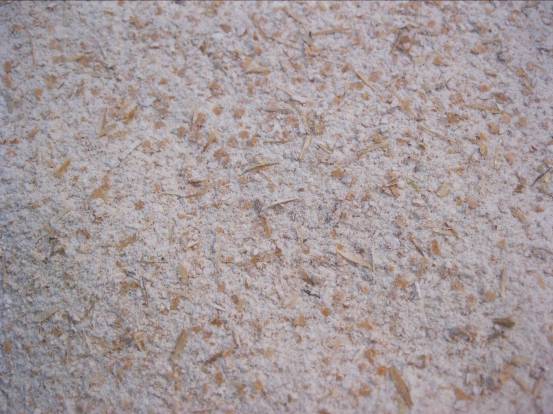 Luckily, these impurities were confined to the very top layer, but clearly, we have to do something about the cleanliness of the wheat! Just by chance, the very next job on the list at the Mill is the refurbishment of the grain cleaner! I had been promised screens, but that was a long time ago. I was unsure of the grade of mesh to use on the two levels, but here again, Mr Halliwell came to the rescue!

The top sieve will be known as No. 14 or 15, and the bottom one 8 or 9, preferably made of zinc, and the motion will be supplied laterally, that is, from the side; as experience has pronounced this to be the most successful in every day operation.

Well, our motion is longitudinal, and there’s nothing we can do about that, but at least I know what to ask for (although meshes now have a higher number for a smaller weave), and I’ve measured up. Simply, the wheat grains fall through the 14 or 15 mesh, leaving husks, etc, to fall off the end. If small seeds, grains of mud and sand fall through with the wheat, they can fall further through the finer mesh to waste below. It’s the clean grain between the two meshes we want! 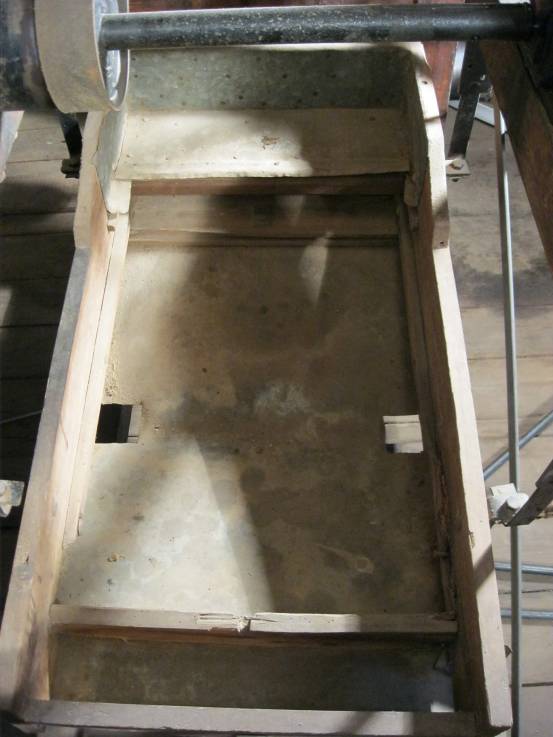 Several groups of visitors came through the Mill during the day, some buying meal; in fact, at the beginning, I couldn’t keep up with production. But later, I ran the Vitruvian Mill on its own with plenty of water over the wheel and before long there were 30kgs chalked up for the day! Thereafter there was time for some maintenance, eg. filling greaser cups and applying ‘Black jack’, a special grade of grease, to the slides of the sluice which was getting very stiff to operate. 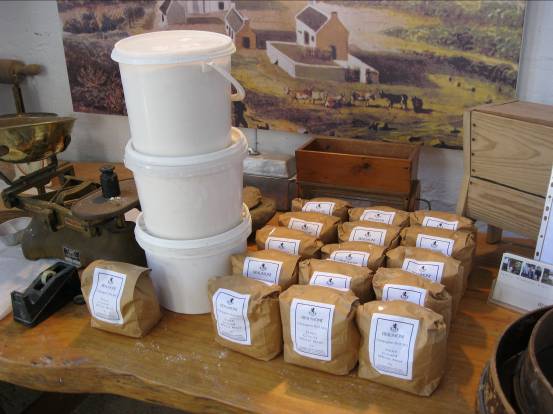 The buckets are full; they are for the girls of Zest Catering to use in two weeks time, for food to accompany the release of the new blend of Beaumont Wine on that day, aptly named, ‘Vitruvian’!