We were all holding thumbs for the weather for Saturday, 28th August; a large group of Press and special customers had been invited for the launch of a new wine blend, aptly named ‘Vitruvian’. 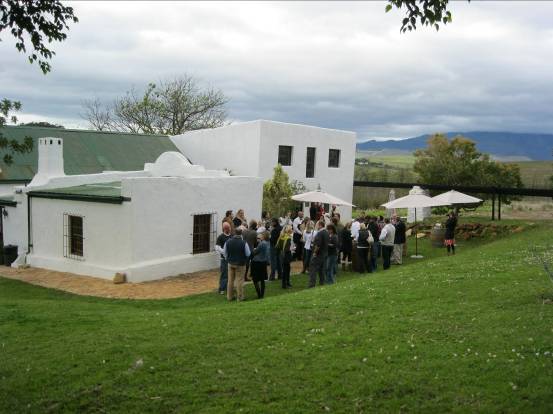 The connection to the Vitruvian mill, which was running for the occasion, is obvious, but the connection goes deeper than that. In about 70 BC, Vitruvius wrote in his 14 books called De Architectura, that everything made by man should work well, look good and last a long time. Sebastian made mention of the much later drawing by da Vinci of Vitruvian Man in a square and a circle demonstrating the perfect proportions of the human body, and that he feels this wine’s proportions are just right!

The Mill was demonstrated to the guests while they had snacks including delicious flat bread like Pto-Vita made from our meal accompanied with white wine, whereafter the group moved up to the homestead for the launch of Vitruvian, a blend of Mourvedre, Pinotage, Shiraz and Cabernet Franc, along with delicious food by Sebastian’s wife Nici’s firm, Zest Catering. 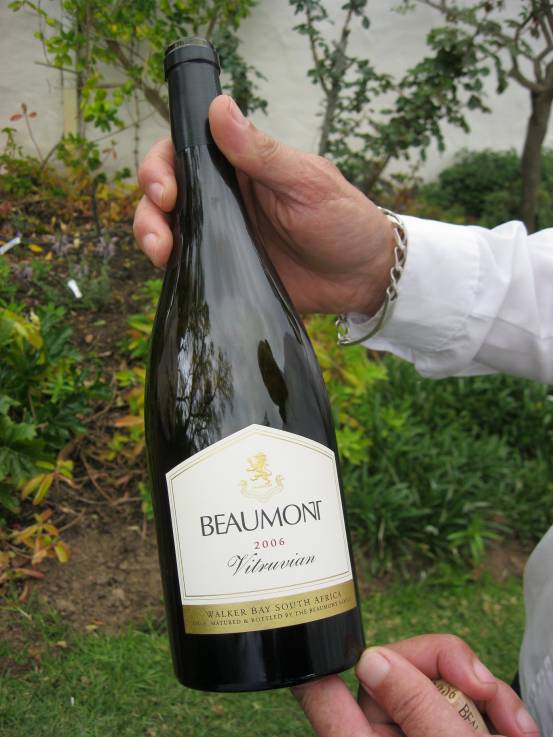 After the launch, I had to build up some stocks of meal for the following weekend, the Botriviera Pink Spring Weekend! This was an initiative by all the Bot River Valley wineries from Witklip in the north to Benguela Cove, near Hermanus. Compagnes Drift staged Café Pink, at the Mill House, with the Mill running all day Saturday and Sunday, with catering again supplied by Zest. 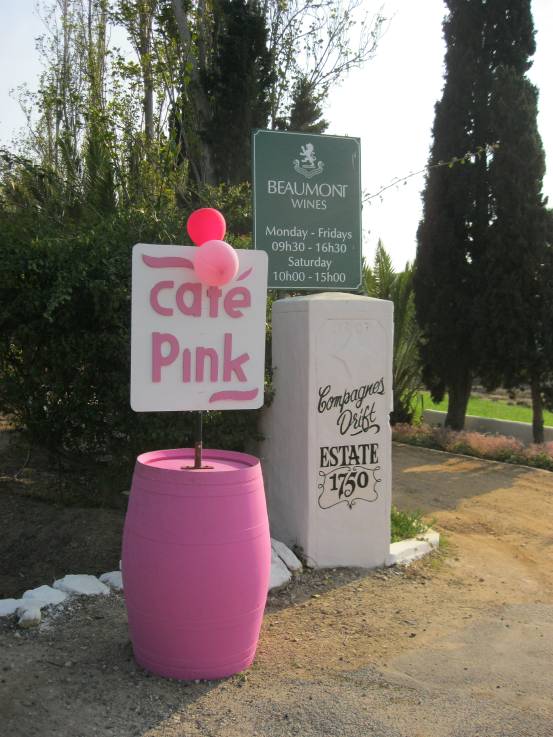 At any participating venue, these distinctive pink barrels were displayed, and a variety of attractions were on offer, from Pink Paint-ball to Pink Polo. Much accent was placed on the Pink wines of the area, for example, Beaumont’s Raoul’s Shiraz Rosé. Advertising also concentrated on the ‘Pink’ community J.

Participants were encouraged to wear pink….. 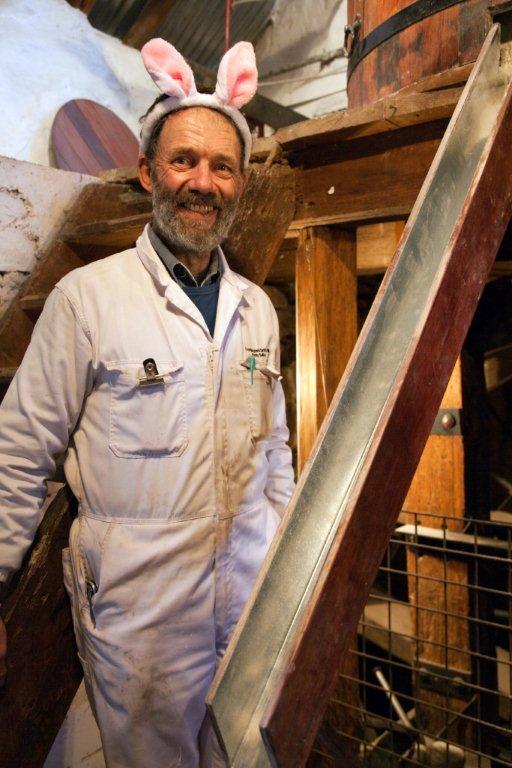 …. There was talk that if someone had a shotgun, I would have been in the pot that night! I was not alone….. 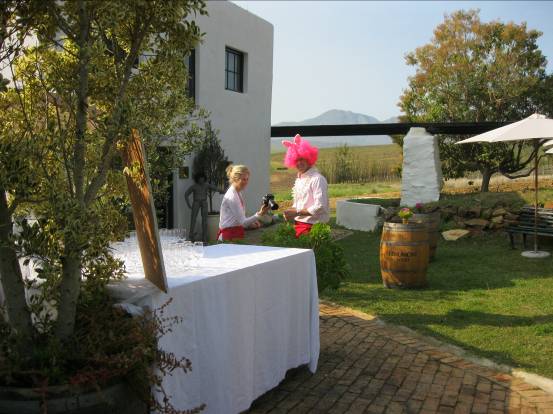 As usual with a two-day event, the Saturday visitors start early, are serious, buy a lot and probably eat something. Sunday starts later, a lesser number of more casual visitors, but equally interested in what they were witnessing!

The reaction from visitors to the Mill was universally one of amazement that the whole mill house was working, and all with water power. I was fortunate to have the assistance on Saturday of Stephen Sokolic; without whom I could not have managed! There seemed to be a constant throng of people in the Mill; suddenly the stock of meal we had brought down from the cellar was sold out and from then on, throughout the day, as we weighed out the meal, it was snapped up. It must be something of a record for us to have sold about 35kg on the day!

The water level in the dam on Sunday morning was disappointingly low. It had not made up much overnight from when I closed the weir. So all day, the water wheel just idled, never making much more than 4 RPM, but that was with everything turning for show. It didn’t matter, because the visitors on Sunday seemed to be there just to enjoy the experience and few wanted meal. After they’d all gone, I disconnected the belt to the line-shafting and ran the Vitruvian Mill only and cleared out the last of the grain.

Doing the calculations of what we’d started with and what was unsold oin Sunday night, it looks as though we milled more than 50kg over the two days. One visitor was from the local grain co-op and said it was rubbish that we couldn’t buy from them anymore; it was just a reluctance to run the cleaning plant. We’re to deal through him in future, and when requesting grain, we must specify that we want 11% protein grain, to be sure of the meal producing good loaves.

One visiting couple on Sunday, Chris & Munya Fisher, who have arrived back from the  UK to settle in Hermanus, said they’d recently visited Letheringsett Mill near Holt in Norfolk. I wrote to Bernard Dodd from Cleethorpes, further north on the coast. He opened my mail just as he was leaving for a holiday in…. Holt! So he and his wife visited Letheringsett Mill this week and were welcomed by Mike and Marion Thurlow and shown around everything.

Bernard sent in some photos and these links 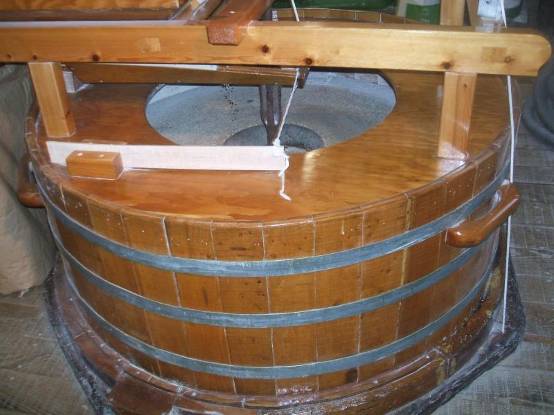 One of the twin tuns. 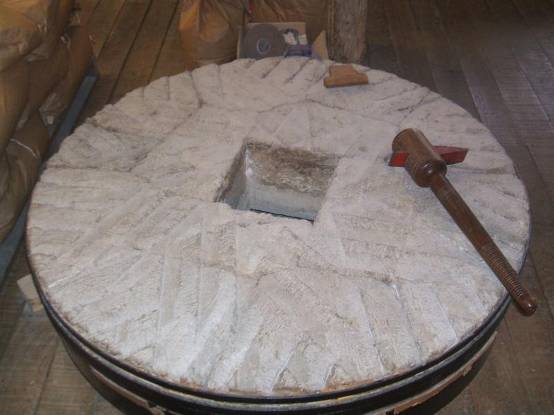 A good example of how masons have to cut Burr Stones to fit together exactly before banding. 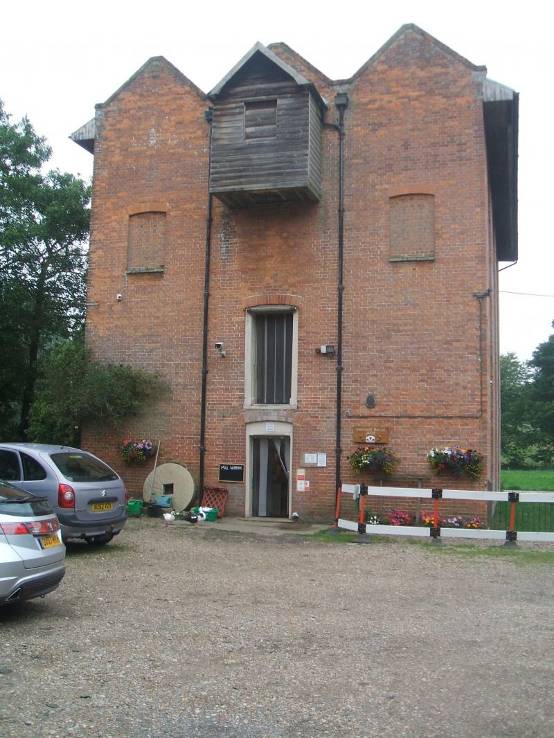 The Mill dates from 1802, but a Mill was recorded on the site in the Domesday Book. This is reputed to be the only working Water Mill in Norfolk.