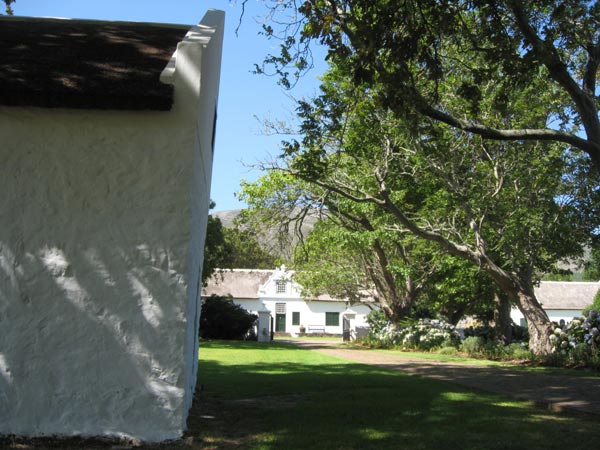 The Mill house is small and immaculate; the walls are floodlit after dark (installed by Philip who has done all the electrical work on this estate for many years). 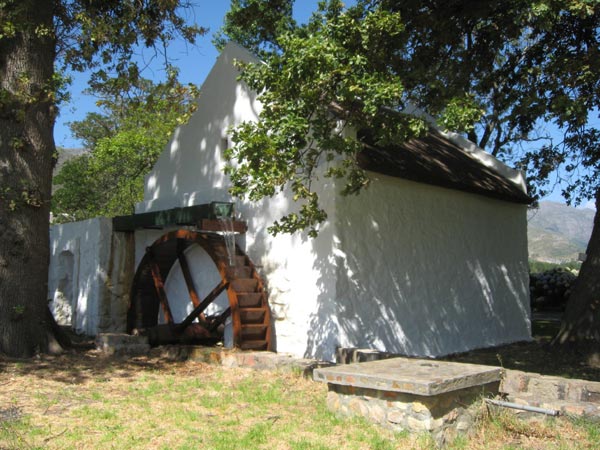 The launder passes over the archway on the right: 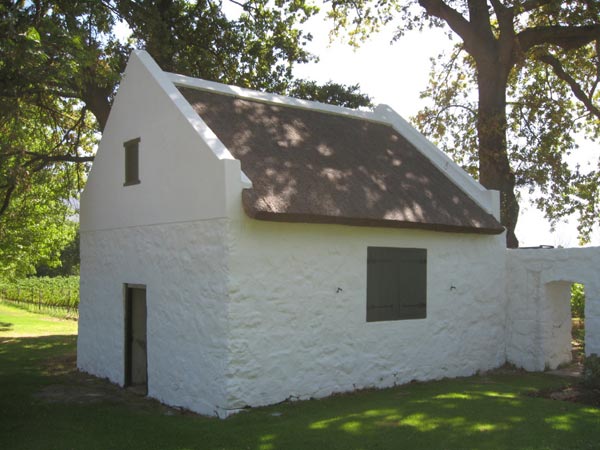 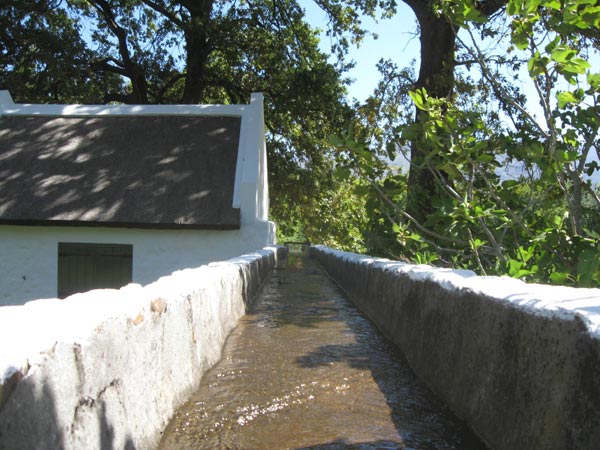 Thence over the wooden wheel, recently restored again. It has four pairs of compass-arm spokes. The farm staff run the machinery at least every week for an hour or so. 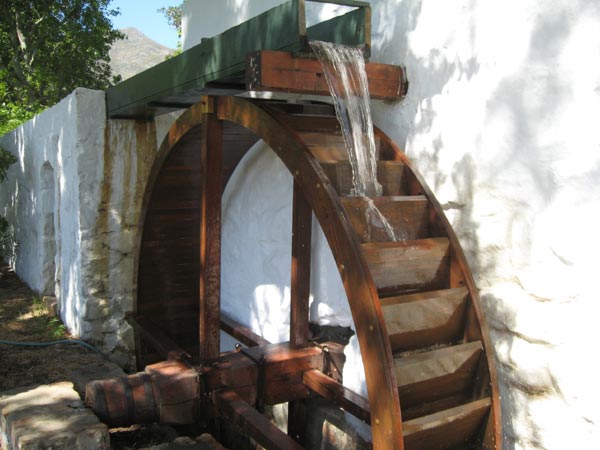 Once every turn, the machinery makes a thump. It didn’t take long to trace this easily-repairable problem, the ‘gudgeon’ at the outer end of the axle-tree is loose. The rounded-end square bar is let into the axle tree, not by a ‘cross-head’, but simply by cutting a slot from one side into which the shaft was inserted and a block of wood holds it in place. This in turn is secured by two iron bands, driven over the tapered end of the axle-tree. 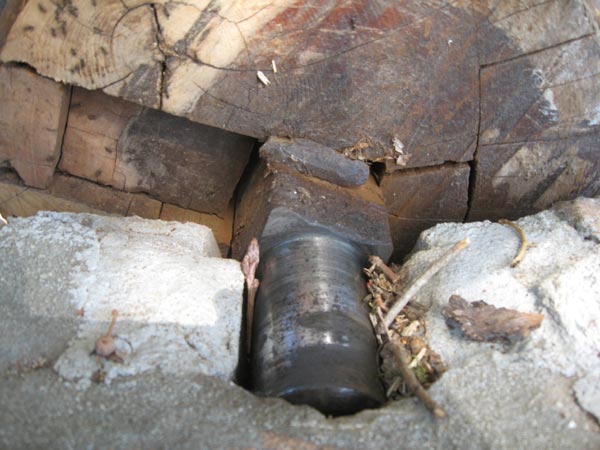 The rounded end also needs to run in some kind of bearing, set into the cement. Inside is also immaculate: 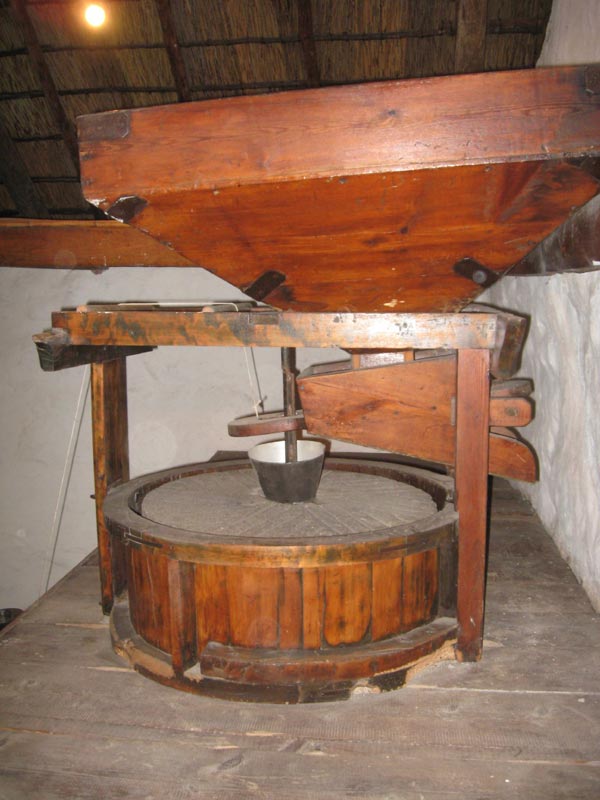 I was delighted to see the ‘horse’ is made of two tees, exactly as I have used, even to the detail of the ‘ogees’ at the ends.

We found no way in which the bearing at the base of the stone spindle could be moved laterally to adjust the stone spindle to run perpendicularly; normally there’s a ‘bridging box’ with ‘hackle screws’. There is an interesting feature, though; the ‘tentering’ or raising or lowering the ‘bridge-tree’ which supports the weight of the runner and so alters the gap between the stones, has two ‘lighter screws’, one at each end. Here Professor Izak Rust is watching the mechanism as it turns. He’s a geologist, and on Monday, he had identified our Vitruvian Stones at Compagnes Drift as ‘silcrete’. It’s a local hard-wearing stone which he’s unaware of having seen used for this purpose, although it has been used for making stone tools for 70 000 years. 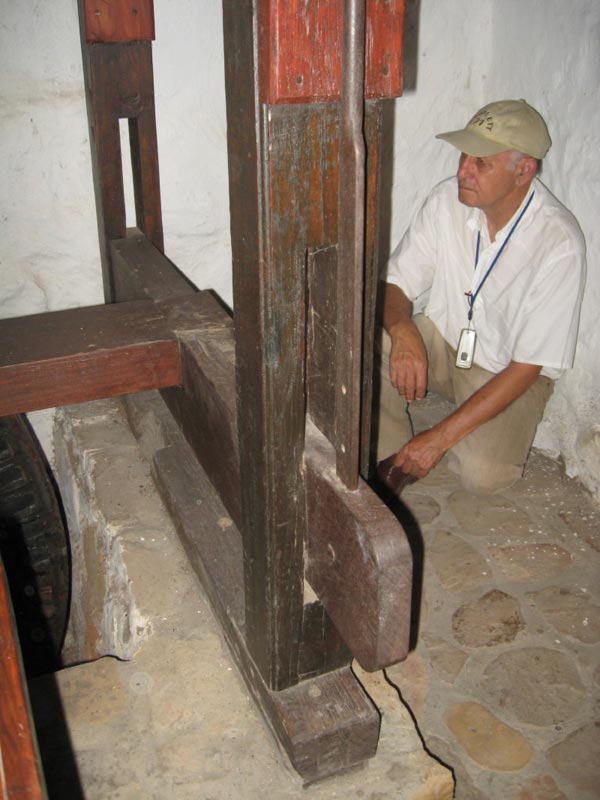 The bridge-tree is dove-tailed into the lighter bars at each end. The wrought lighter screw can be seen, flattened, to pass through a tenon in the lighter bar. The whole assembly is repeated at the other end. In the view which Izak is looking at, the stone spindle simply rests on the non-adjustable bridging block. It is not clear what material it is made out of: 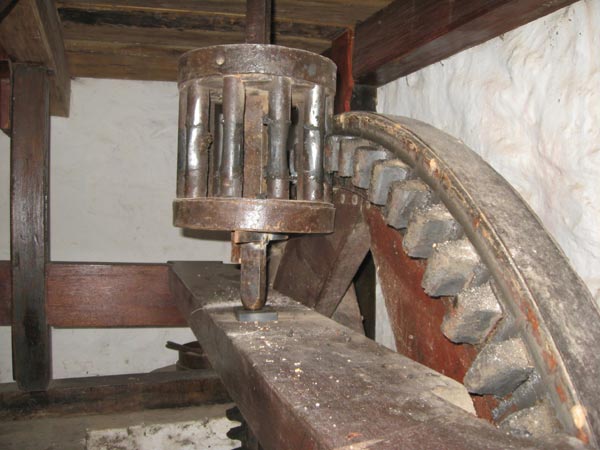 This is the wing nut on the left hand lighter screw: 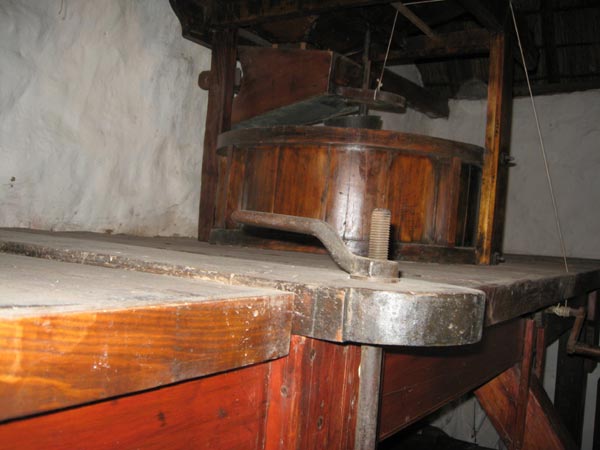 There is a traditional ‘brandsolder’ of bamboo, which would normally have a mud covering to prevent the spread of fire from burning thatch to the lower part of the building: 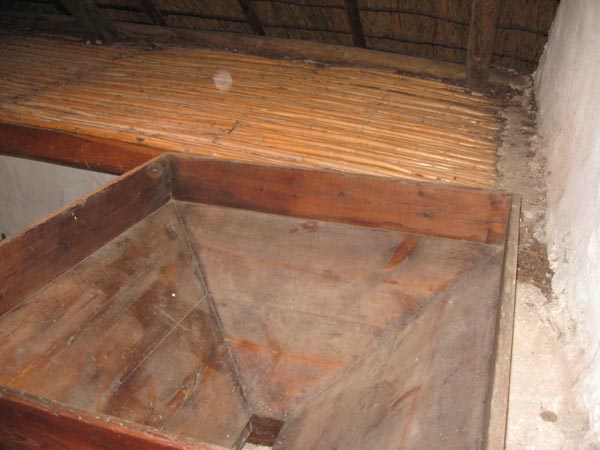 The shoe has a screen in its base along the line of the screws, below which is a reverse-slope. The fine screen allows dust and particles from donkey-droppings from the threshing floor to be separated and deposited on the floor behind: 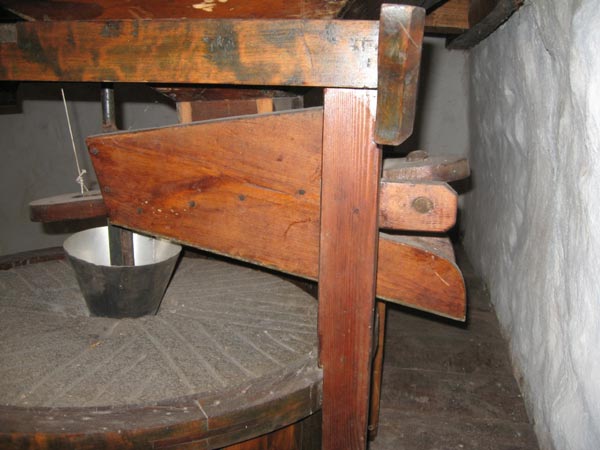 An interesting point to note is that the runner has been dressed on the top! There is no technical reason for this, it must have been turned over for some reason, and one presumes the other side is dressed too….?

We thanked Pietie very much for sparing his time for us, and I hope he will visit Compagnes Drift soon to pick up some tips. He is having some difficulty making meal that’s fine enough for bread making.

From La Motte, we went on to La Cotte, right in Franschhoek town. It's also mentioned by Walton above. Things have changed a lot since he described it 36 years ago. It has been through one restoration, as is described on the plaque: 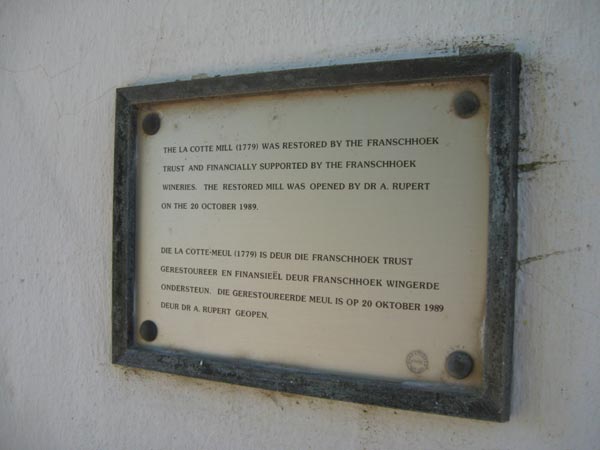 Although opened by Dr Anton Rupert, it doesn’t belong to him, being now owned by, to quote from a website: Robert Maingard, a Mauritian who has made Franschhoek one of the places he calls home.

The area has a derelict look about it. The main house which has been distastefully altered in the past is standing empty and the thatch roof of the Mill building is falling out. It is not clear what was included in the ‘restoration’ described on the plaque. 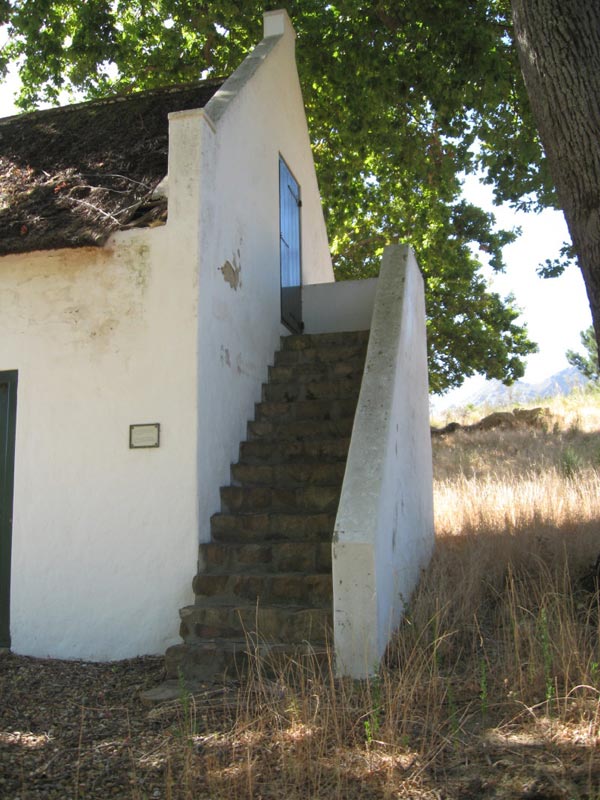 Members of our group thought all the machinery was missing, but I noticed the loft door bolt was missing, so it wasn’t long before we were inside, to find a jig-saw puzzle: 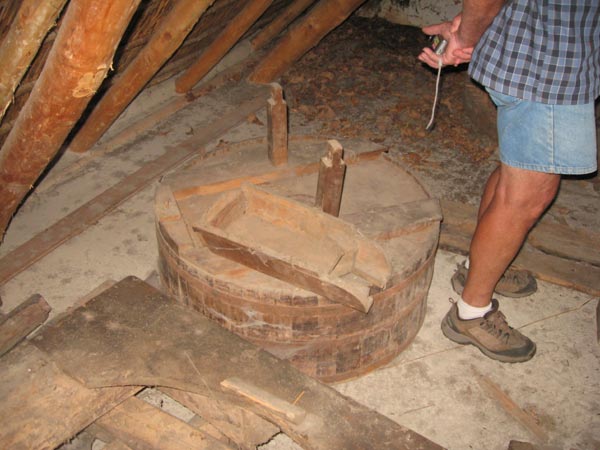 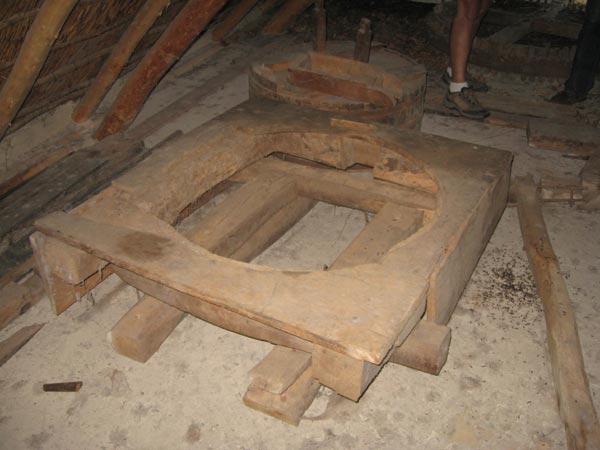 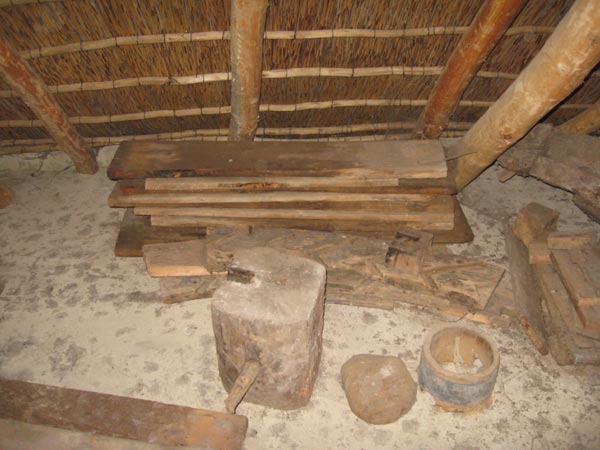 Looking through the ‘stairway’ downwards: 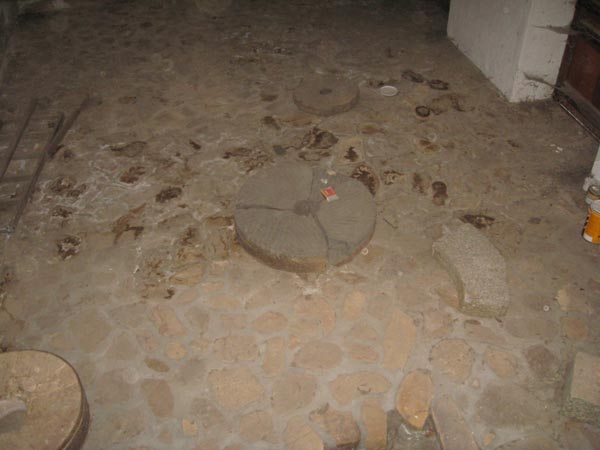 A lot of work to get it running! The wheel looks good from a distance, but from close up it’s a different matter: 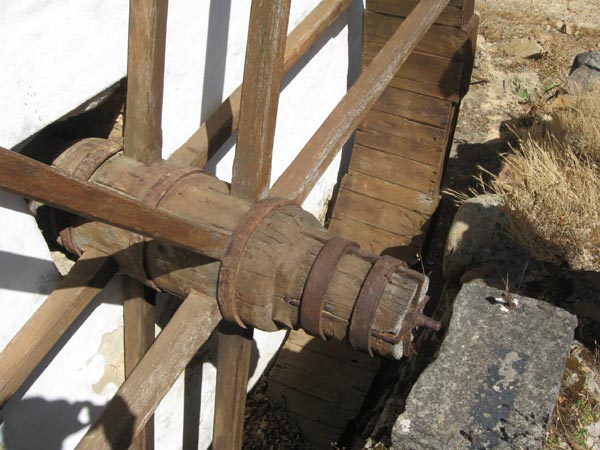 That’s a traditional ‘cross-head' gudgeon, very badly worn, and although the axle tree looks reaonable at this end, it’s totally rotted away inside. One of the reasons why the ‘compass arm’ wheels like this went out of favour was that water soaked in to the tenons and caused rot. It is interesting that it’s the inner end of this axle tree that has rotted, whereas the outer end is fairly sound. This wheel has six pairs of compass arm spokes. 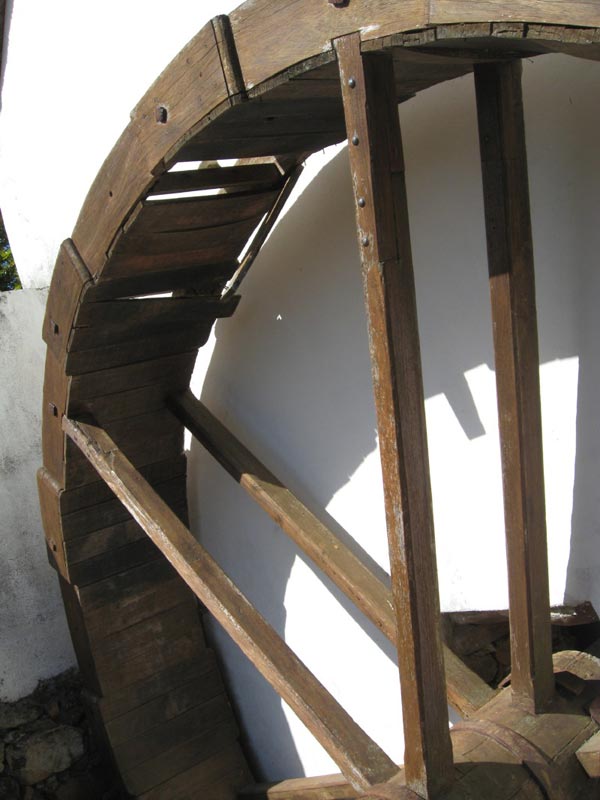 Professor Rust had another job to do while we were there, for which he had permission (our actual reason for ‘trespassing’); to collect seeds from an aloe: 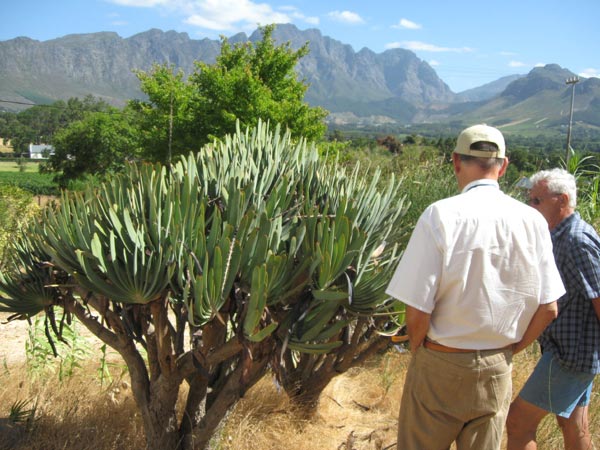 Aloe plicatilis is the only tree aloe confined to the Southwestern Cape, where it grows on the mountains from Franschhoek to Elandskloof in the north. Aloe plicatilis grows on steep, rocky slopes in well-drained, acid, sandy soil. It grows among Proteas, Ericas and other fynbos vegetation and is one of the few aloes found in such vegetation. The fan aloe grows in an area with a high winter rainfall. This plant is not threatened but has a limited natural distribution area.

That’s from the website http://www.plantzafrica.com/plantab/aloeplicatilis.htm. Izak is propogating them and has several specimens growing out already.

It is not clear what the future is of the Mill, but our group will soon find out. Having seen this one, it means they will have seen three Mills in a week, all totally different; two running and one mechanically derelict but with potential. Watch this space, but one of the guidelines of the Society for the Preservation of Ancient Buildings (Mills Group) is to make sure of the long term future of the building before wasting time with restoration. 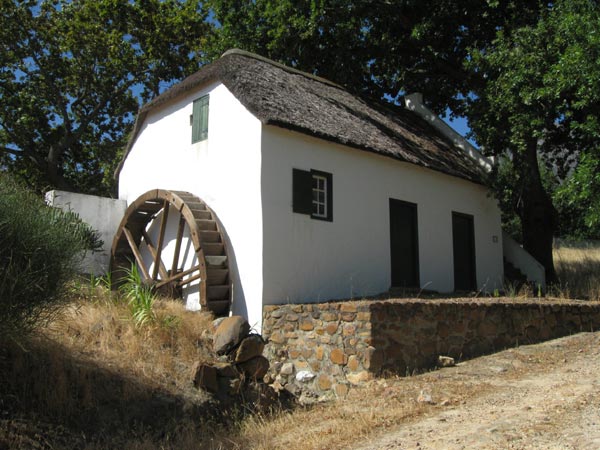 On Saturday morning, I was back at Compagnes Drift, ready to entertain and enthrall a Wine-tasting Group from Cape Town. Many described their experience in superlatives, like the ‘highlight of our visit’, which was gratifying. It means the purpose of our exercise is succeeding, to promote Beaumont Wines. Now forever they will associate the wines with the Mill!

I have been troubled lately by a high-pitched squeal from the stone spindle, where it passes through the three wooden blocks in the bedstone. On Graham Morrison’s advice all the way from the Isle of Lewis, I installed grease supply pipes into the pads of hessian which fill the spaces between the wooden ‘jaws’. The ends of these pipes reach up half-way into the hessian. I was worried that the upper part was not getting enough grease, so I forced two of the three pipes upwards and pumped in more grease. 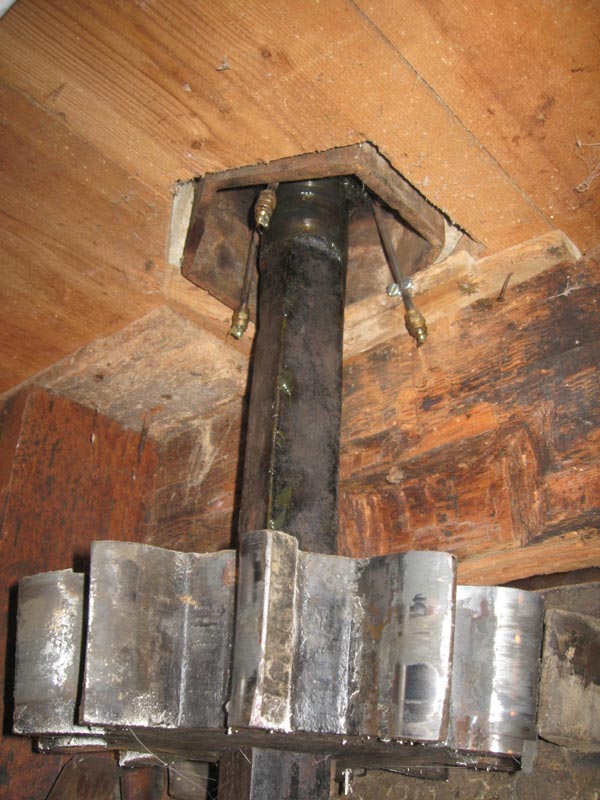 It seemed to cure the problem, which is a relief; otherwise I would have had to do a lot of dismantling and putting together, with only two weeks to Open Days.

Because Open Days is just around the corner, I wasn’t holding back with meal production, so I was enjoying myself putting through batch after batch, eventually milling over 25kg, and that was still not pushing it. Meal usually sells well on the Open Days, but also Zest Catering, who do the food for the occasion, use our meal exclusively in their breads.

There was still time to do more work on the upper floor and chutes. I was very happy with the results from the Balcotan Rapid glue which had foamed up to a surface which is easy to sand with a disc. The surface has the texture of hard polystyrene foam, which will be adequate to support the floorboards: 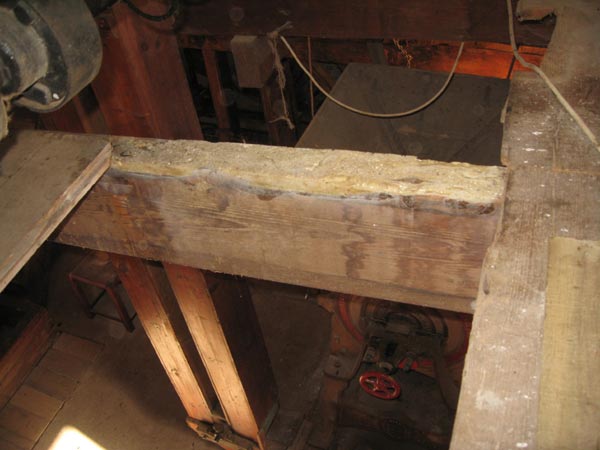 The wooden support block for the bearing I also gave the same treatment to, still needed more glue to be applied but after the first sanding it was looking better already:

The galvanised lining for the chute to supply the Stamford Mill from the main elevator arrived in the week, so I offered it up. I was pleased that it could be made all in one piece, 3m in length: 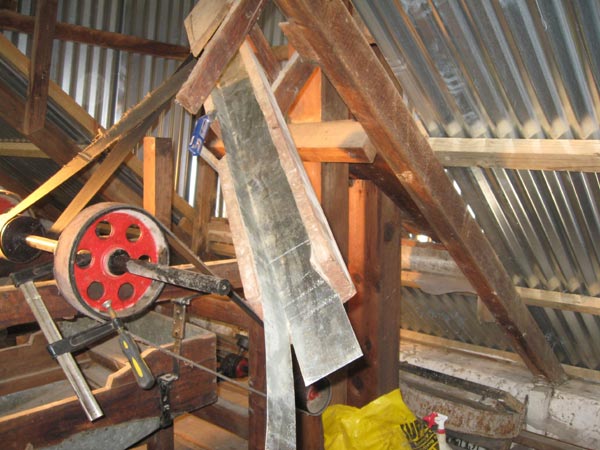 The combination square is at the base, reading just 37 degrees. I am worried this is not steep enough for the grain to flow, but it must have been like this before. I have brought the trough back at home to line the outside with ‘Oregon’ pine. There was just time to remove the rusted galvanised sheeting in the main part of the chute and to try out the new strips which were also cut during the week: 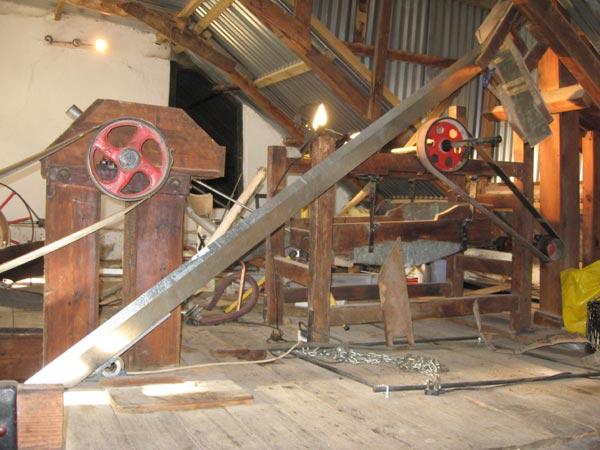