The steel service workshops are only opening on Monday, so although the linings of the chutes worked out last week are ordered, They will only be delivered in the course of this week. That meant that I chose to tackle a job I’ve been avoiding for a long time; the rotten planks in the upstairs floor. 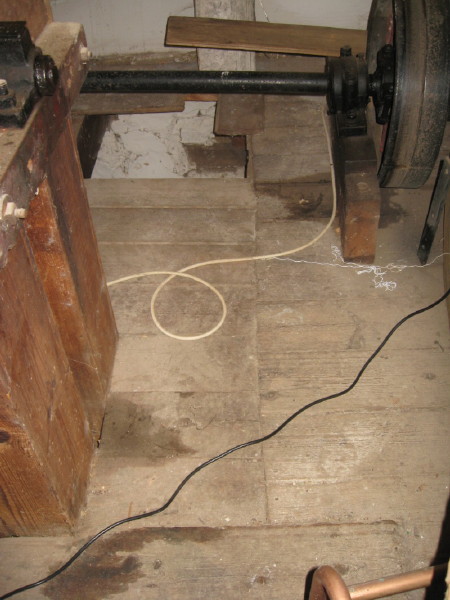 The gap at the back is where I fell through recently, and the join between that and the camera is unsupported, there being just a wooden strip underneath, across from one plank end to the other! The beam is under the wooden block which supports the bearing at the top right, so that had to be dismantled and moved out of the way. 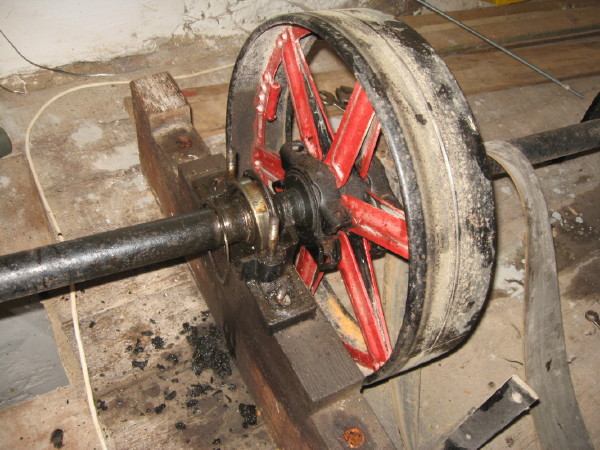 I started by removing the long coach-bolts through the wooden block, the floor and the beam below. Then I dismantled the bearing, but found I had to remove the pulley too. Luckily it’s split, so it comes off in two halves. Then there was a taper locking sleeve inside the bearing to loosen off and then I still needed to jack up the shaft a bit to get the wooden block out.

Oops! The underside of the wooden block doesn’t look good! Not worm; it looks like old wet rot, stopped when the roof was repaired. I was able to scratch it out and found hard wood underneath.

I could then start trimming the planks in the middle of the beam, and for this, I had brought along the right tool for the job! In fact I can’t imagine how else I could have done the job, except with an adrasive cutting disc.

It’s Black & Decker, it’s called a Scorpion and it works as easily as an electric carving knife! It’s possible to just drop deep enough into the plank to cut that and not the beam below, and it’s even not too disastrous if it nicks a nail! Using a wooden strip as a guide, it was an easy job to cut across each plank and lift it out, and when I got to the end, to cut longways along the join in the planks. One can tilt the saw at any angle; in fact, this model converts into a jig saw as well.

Soon, I had a gaping hole, which got a bit bigger as I came across more worm-eaten planks; one under the line shafting has been suspect for a long time. Removing this long one meant dismantling the support for the next bearing along the shaft, which is a simple solid wooden block with a hole for the shaft and an oil hole! 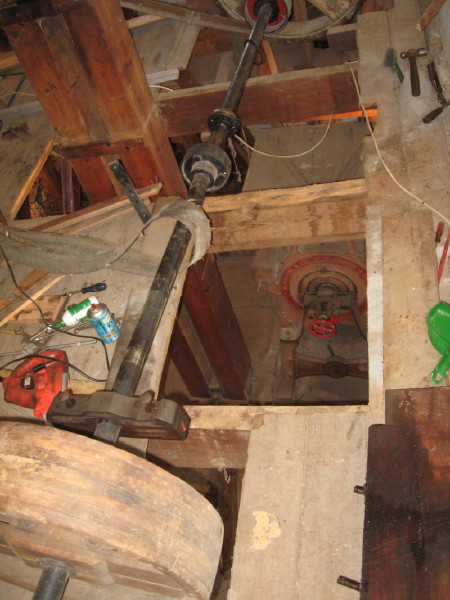 From below, the opened up space looks quite impressive! 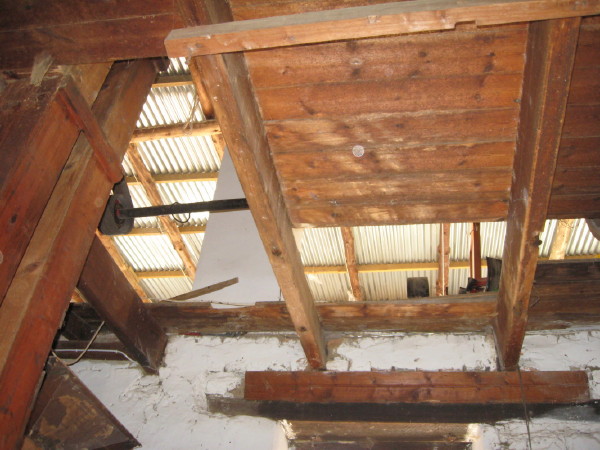 But the top side of the middle beam, just under where the wooden block for the bearing, had similar damage to the block. Again, papery to a certain extent, but after scraping that out, firm wood underneath: 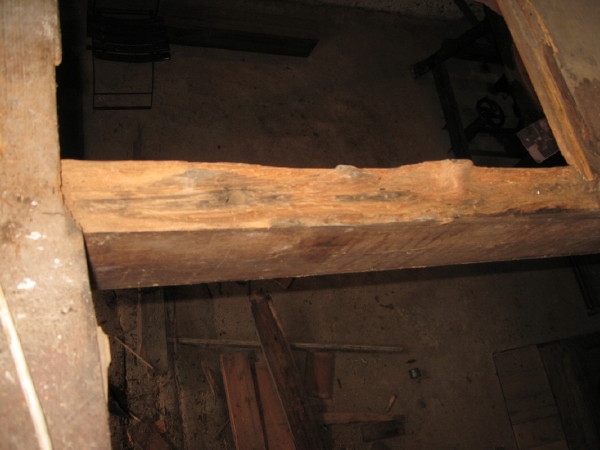 I could perhaps have cut it out somehow and spliced a fresh piece of wood in, but the remains of nails are left behind, so any sawing or routing operation would have been a problem. I decided to build it up with some kind of space-filler. I had Epidermix, a good, bulk 2-pack epoxy made by African Bitumen Emulsions (ABE), but it’s expensive. I had Steenvas, also 2-pack, and expensive but it sets rock-hard and it would have been difficult to nail into. I settled for the wood glue I’m using, Balcotan, this latest type called ‘Quick’ (or words to that effect!). When I used it last week, I noticed it foams up like Poly-Urethane.

So I lined two planks with duct-tape as ‘release-agent’ and clamped them to each side of the beam as a mould and started applying the glue in shallow layers.

Then as it got level with the top, I used strips of duct-tape across the top to prevent it rising any further freely. It forms a kind of mould top. 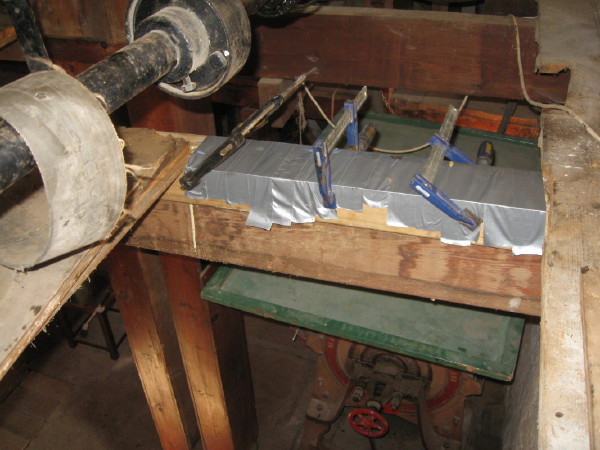 The degree of dismantling can be seen in the picture below. Now it can be seen why I was avoiding this job!

Several visitors came through during the day and the machinery was turning most of the time, although I didn’t do any milling. Despite the dryness of the climate, the water flow was the strongest I’ve ever experienced, without any of my slides being open in the weir at the dam outlet. 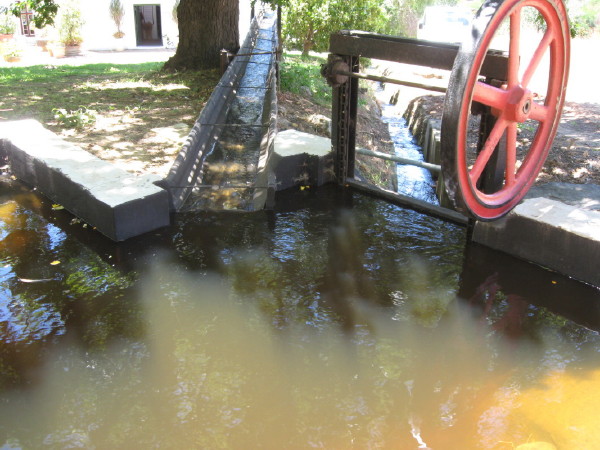 The water was almost level with the top of the sluice, but by that stage the outflow down the launder increases, meaning a lot more water is needed before it actually overflows. I had expected this to be the case, and I suspect the height of the sluice is (by chance) just right!

It meant, though, that I had, for the first time, to regulate the flow onto the wheel with the trap-door, and allow the balance to run to the end of the wooden launder. Some re-positioning of D-shackles on the chain inside made it possible to adjust the wheel speed quite finely. 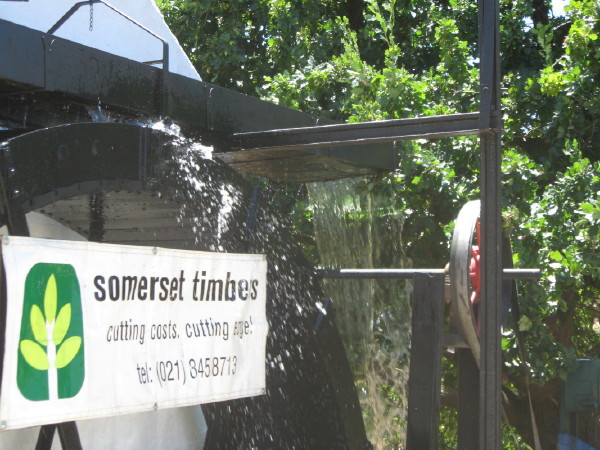 The Sunflowers are keeping Ariane’s cut-out on the barrel company! 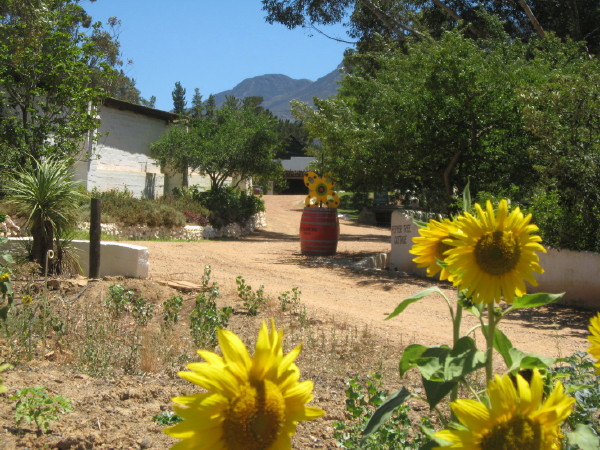