At home I had glued the joints in the beams, the next step was to pin them. I found it best to work on the back of the lorry with the ‘legs’ hanging down. It kept raining all week (we had 44mm), luckily the glue is Balcotan which can take it. Also the cold grown pine wan’t letting much soak in and it was soon dry. I used Woodoc 5 Poly Wax sealer Indoors which is a wood-treatment, not a varnish, to bring the colour out. The difference is remarkable! 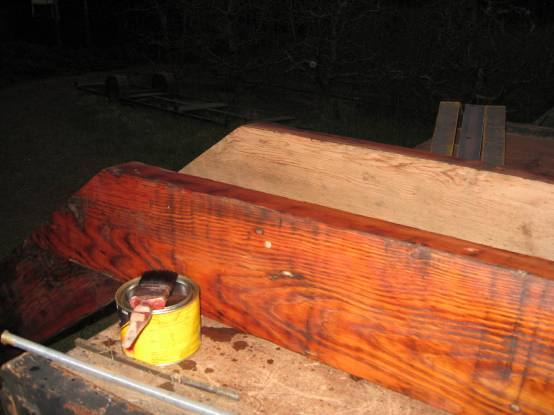 Drilling centrally down a 9” beam that’s only 3” wide, hoping to come out in the middle on the other side isn’t easy, so I got myself a drill guide: 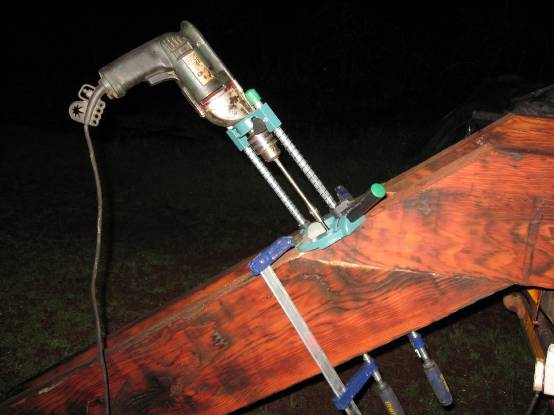 The drill-bit also needed an extension to drill right through, as did the 16mm tap which I used to begin with, to cut a thread for the redibolt: 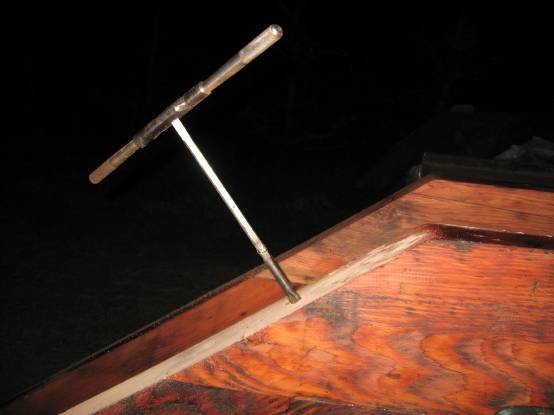 I cut threads in the two holes on the first beam, but on the second beam, I allowed the sharp cut end of the redibolt to cut its own thread, with plenty more Balcotan in the hole and on the thread as I screwed it in: 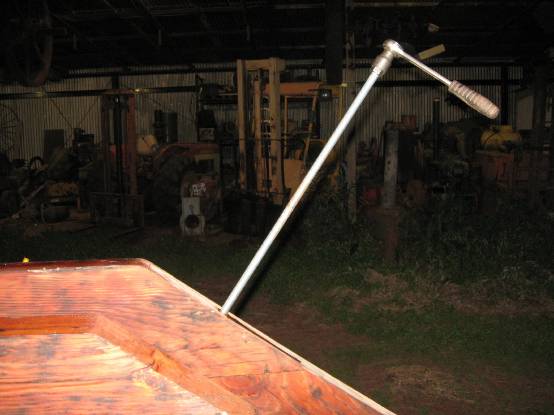 Once the threaded rod was all the way through, I used a cutting disc to cut the top flush and sanded all four smooth.

Loading at home was a piece of cake with a forklift! 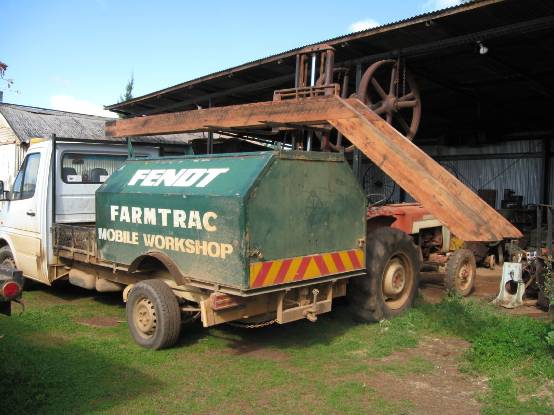 A red flag on the end and the speed-cops were happy! Offloading at the other end was more of a problem, by hand, and one of them flipped over in a gust of wind and hit the ground and cracked open! A few choice words were exchanged between me and the South Easter! Like the other six Dwarfs, I was not Happy. Interestingly, it didn’t crack at the join, but a little way away, and through the threaded pin hole. Luckily I had just bought a fresh bottle of glue which is very thin. I allowed this to soak into the new crack, and first G-clamped, then finished off three pairs of the actual clamps and put them on. 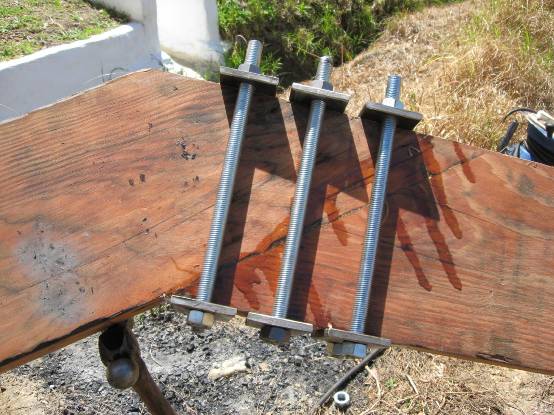 The new crack can be seen above the original join, which held.

The next big job was to hoist them up into position…… a rope at the joint and heave-ho! I cleared that area of the room and took all the pictures off the wall. The first can be seen in the picture below, already in position; the second still must be lifted! Once over the wall, I had to be very careful as I carried it past the Furniture of the Vitruvian Mill. If either of the beams had swung over and fallen, it would have made matchwood of the Horse, Shoe and Hopper! 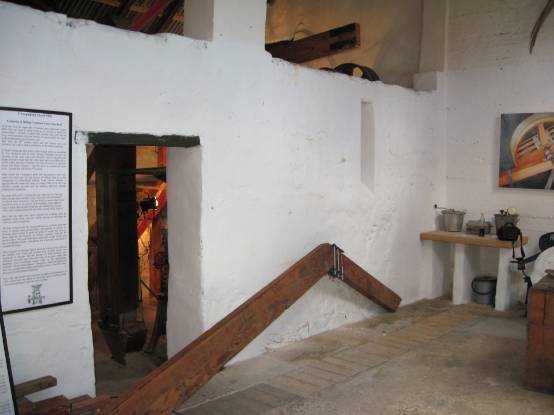 Then after a bit of preparation and painting on the steel brackets I’d had made in the week, I fitted them. 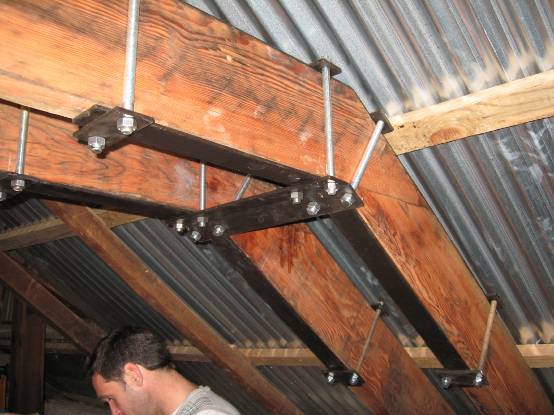 There are 8mm steel plates bent sharply on a bending brake top and bottom. The clamping plates are also 8mm thick. I’d like to replace the redibolt with square bar with the ends turned round and thread cut on them. Half of the clamping brackets reach from one beam to the other. I wasn’t sure where they should be fitted for best effect, perhaps all the top ones? In the end I decided to fit them all at the actual bend, top and bottom. They help to square the assembly up. The beams will need stiffening up elsewhere, from one to the other, to prevent them falling sideways, but I haven’t decided yet how to do that, perhaps with wood, perhaps more steel brackets like this. I need to keep the area above the stones clear so that whatever I use to hang the chain-block from, can be slid along, so I can put the Runner-stone down, as I found it, next to the bed-stone. I will then be able to turn it over there for dressing.

And, surprise, surprise! With the main section of the beams horizontal, the legs are parallel to the rafters! 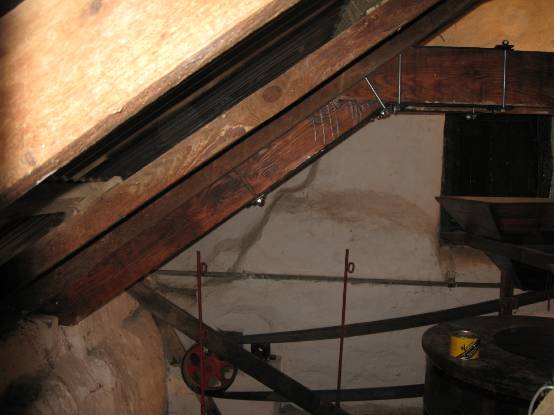 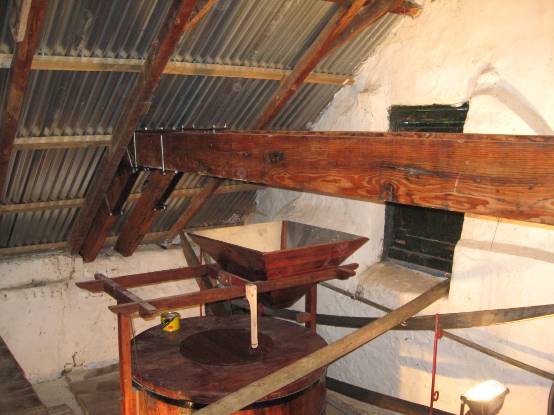 I could then measure the height for the wooden ‘legs’ at the other end of the beams, which are hanging on ropes at the moment. I will use the old cold-grown pine beams kindly donated by Hennie Richter. 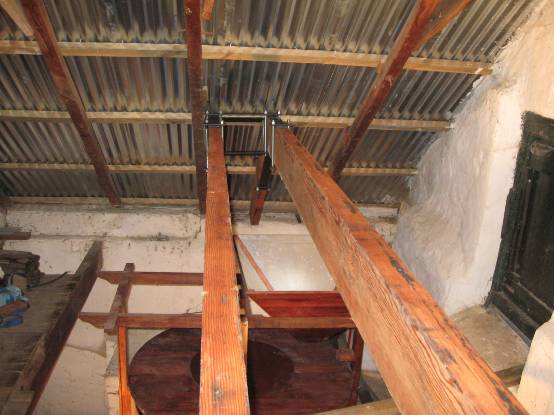 For most of the day, all the machinery was turning for the benefit of the many visitors, (the first of whom arrived just after I’d got the second beam into place!), but I didn’t mill. When ‘putting the Vitruvian Mill to bed’ I was able to fit two new additions, a round plug for the lid for the Tun, glued together gradually at home: 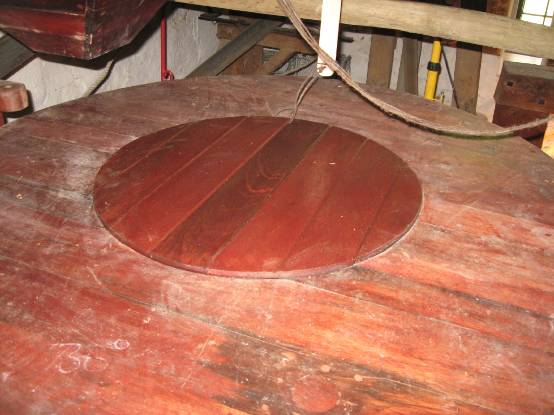 And something less chewable for the hole where the meal-spout fits, made of galvanised steel sheet. It hooks into the bracket for the meal-spout: 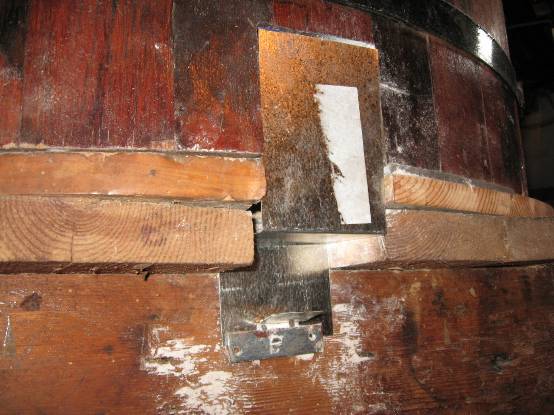