With both of the following weekends, Saturdays and Sundays, open to the Public, there was a lot to do. Zest Catering are offering meals and they had asked for a large quantity of fresh meal to make rolls out of. I also wanted to finish the woodwork of the lifting beams. 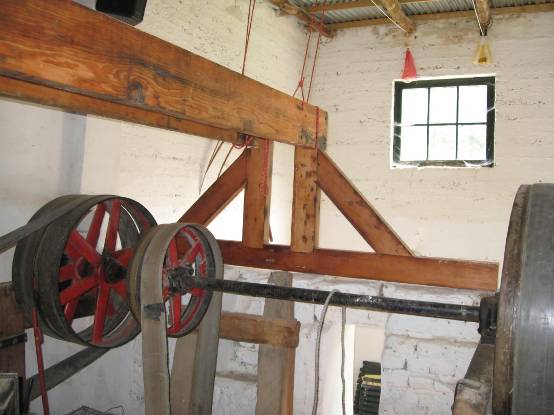 During the preceding week, I’d delivered the new support assembly and offered it up, just to check my measurements…. It fitted! Simon Smith, who has been advising me on the joinery, said the special joint I copied from him on the diagonals is called a ‘Bird’s Mouth Joint’ and it has been around for a long time!

But first I wanted to finish the modification of the brackets at the joints between the ‘legs’ and the beams. Even before I left last week I’d decided the lower brackets needed to be made into triangles. Several people on the mailing list also wrote in and suggested the joint should be reinforced in some way. I took the first back to the workshop and had steel bars bent and we welded one end. After measuring, we just tacked the other end. That was a good thing, because we were out by about 3mm which gave a totally different angle! 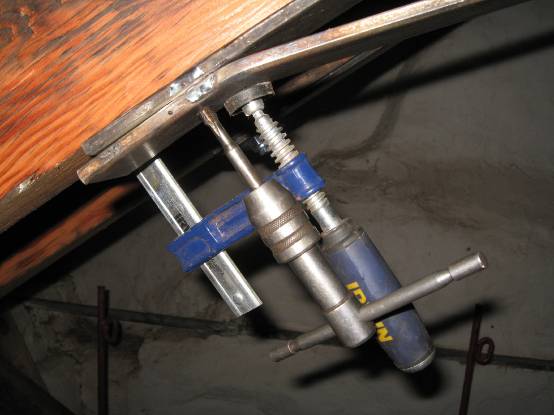 The original ‘tack’ can be seen, now cut open and slightly out of line. With the bracket clamped to the beams, I drilled and tapped an 8mm thread through both plates and inserted a screw. This held the two in exactly the right position. I then took the bracket down and welded it outside, then took the screw out. After painting, I refitted the first, then repeated the procedure on the second. This should satisfy the Engineers in the readership! Many thanks for your feed-back! 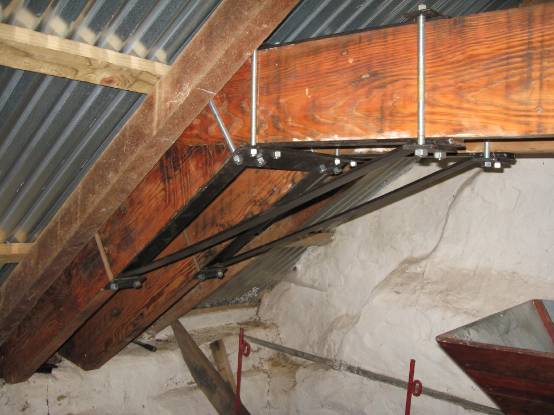 The plates are welded on each edge for about 80mm, which makes a very strong join, and the two are clamped firmly to each beam. Very little headroom is lost, the added strength is enormous! Now I could anchor this end to the rafter, as I had the original: 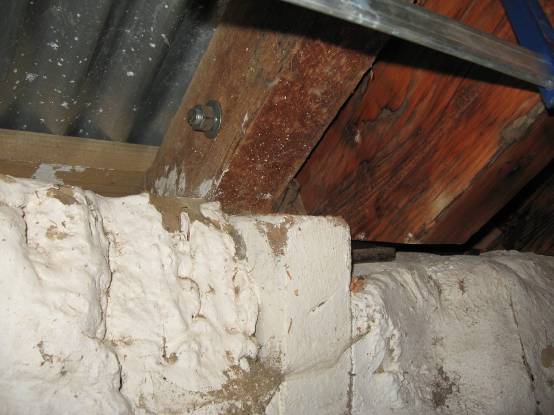 That 16mm bolt, with spacers between the rafter and the left hand beam should prevent the whole assembly moving away from the roof. I could then level up the support at the other end and install the steel bands we’d also made at the workshop. 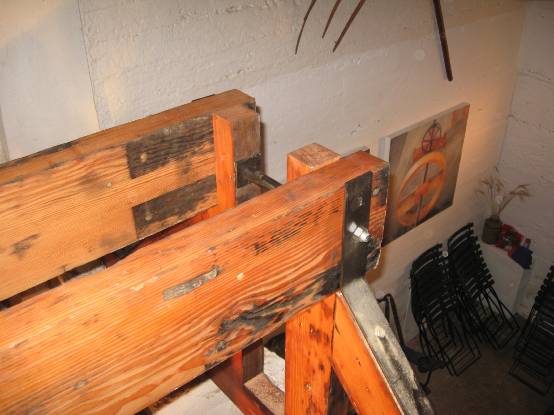 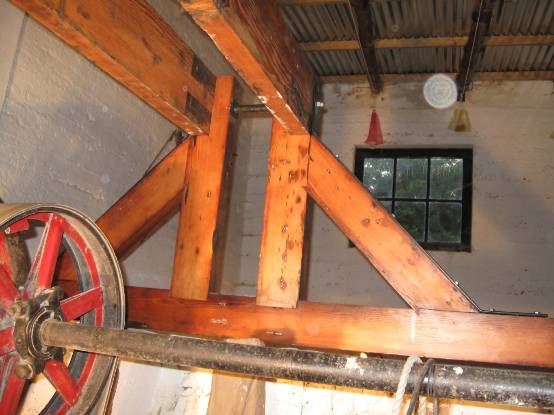 The steel tube will double as an anchor for a chain-block to pull along the ‘crawler’ with the mill-stone suspended from it. The crawler I used before is at the workshop undergoing modifications. There will still be some kind of gusset between each upright and each beam. There was yet another bracket to offer up, the one which is still in two pieces, which will prevent the ‘legs’ from falling over sideways: 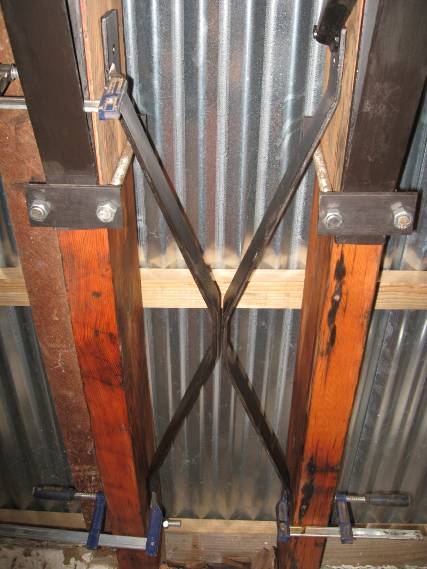 The problem here is there isn’t room to get a drill in between the beams to drill outwards….. Once the holes are drilled, the middle ‘cross-over’ can be clamped, taken out and welded, then the assembly can be refitted. A second coat of Woodoc 5 at the bottom has certainly brought out the colour again!

During all this construction, a batch of meal was going through the Mill. I was most satisfied to tally up the number of weighed-out 1kg bags….. 49 from a 50kg bag! We never got that kind of economy with the Stamford Mill, where the best cake flour wafted straight into the atmosphere!

The farm staff had cut some sheaves of wheat the week before and bound them. I tried out attaching one sheaf each to the ropes from which the bags of moth-balls hang to keep the bats from roosting above the preparation tables, and took the opportunity of topping up the moth balls in the bags themselves.

But there was still another thing worrying me. At the bottom of the meal-spout, I have been supporting the bucket for catching the meal in, on a 20 litre tin of Iscor Black. Not quite the right thing for a 200-year-old mill! I decided to make a stool, trying my hand at tenons and mortices for the first time: 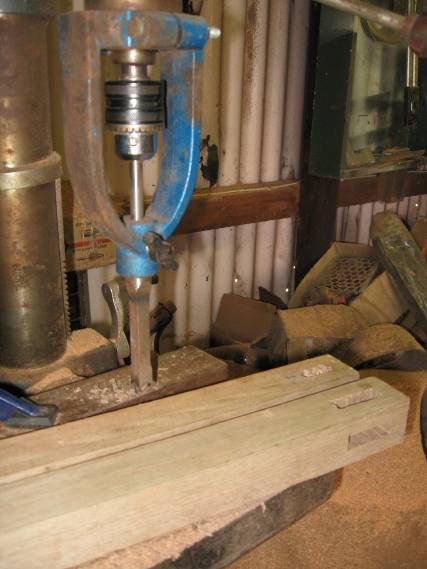 I have had this attachment for making square holes for years, but have never used it. It takes the hard work out of making the slots, which can then be cleaned out by hand with a chisel. Last year I was given some tools by Kristina Piening, whose father was a Miller in Hamburg. There was a fine wood chisel amongst the tools. After sharpening, it was just the tool for the job! 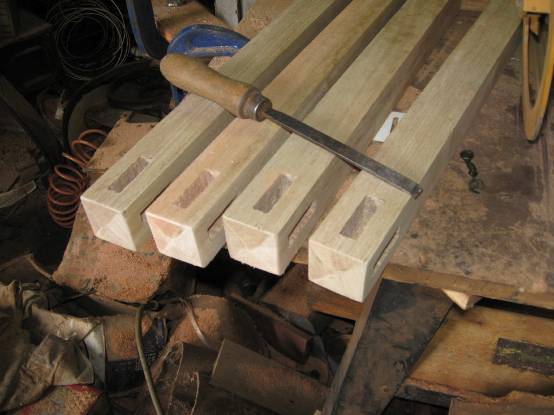 I include these pictures of the construction, not because they have anything to do with milling; just that it was great fun to make, and at least it proves the stool didn’t come from Mr Furniture, like the top of the ‘lectern’ last week! 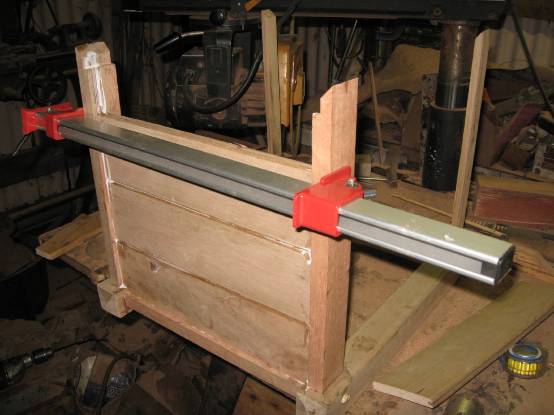 And, with the first coat of Woodoc 50 and rosewood tinter: 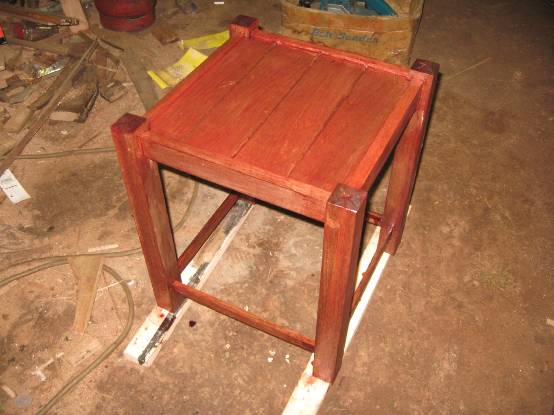 The bottom rail is made from the very last piece of wood from the wooden tank which I made the tun and so much more from!