Just in time for the second Elgin Open Gardens weekend during which the Mill operated both days again, I was able to buy this set-up for showing early video footage of the restoration: 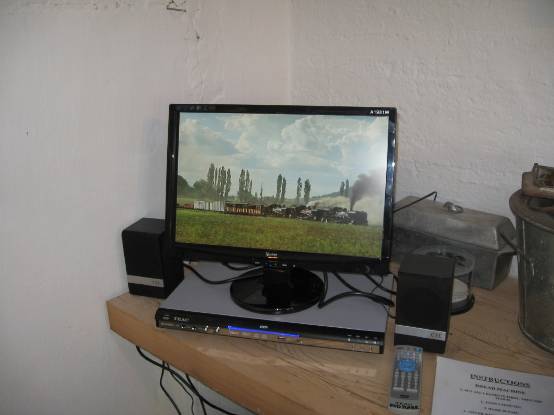 It consists of a DVD player, an adaptor and a computer flat screen. There’s also a simple sound system. It was partly funded by a kind donation from Personal Trust, who visited the Mill recently.

The second Open Gardens weekend went without a hitch. I was on my own, but there was no pressure on producing meal, so I just made enough to keep the stones ‘fed’. The weather was appalling, with strong winds on the Saturday and rain with it on the Sunday. It did not deter the determined visitors, and those who braved the weather were genuinely interested, judging from the questions asked. It did not deter the Crankhandle Club on Sunday morning, either. Three Rolls Royces as well as many other old and interesting vehicles graced Compagnes Drift’s parking lot!

On the following Sunday I was happy to entertain my parents from Cape Town and my sister from England at the Mill, and we milled Organic grain for the first time. Organic, stone ground, whole wheat meal, milled with zero carbon footprint makes a really tasty, wholesome, feel-good loaf!

Since the Third Anniversary of the Mill’s restoration at the beginning of October, we’d been planning a celebration in the form of a dinner in the Mill house, to thank those who have helped so far. We decided on Wednesday 18th November and about 24 people attended. We used the two tables which are always in the Mill, and serving was done from the inner room. The Mill was operating slowly all evening, milling Organic grain again and samples of this were given to many of the guests to take home and try out. 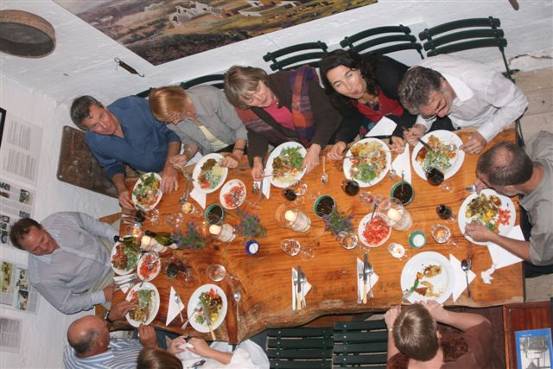 I was given a chance to say some words of thanks. First to the Beaumont family for saving the Mill; looking after it, fitting doors and windows, restricting entry (it took me 20 years to see the inside!) and a new roof. Also, the water wheel and outside equipment was painted, so all the milling machinery was preserved. It really took very little to return the mill to running order with the engine in the beginning. So easily could the Mill House have been converted into more self-catering accommodation!

At this stage, I mentioned all the other Mills and their volunteers, who have been helping me along the way. These include Neil Olsen at Ifield in Sussex, he is restoring an elevator and we’re comparing notes. Graham Morrison at Garrabost, near Stornoway on the Isle of Lewis has been helping, particularly when I was setting up the bed and runner stone. All along, I’ve been helped by the team at Mostert’s Mill; it was Joanna Marx who introduced me to Compagnes Drift after all! Whilst they say they can help with the Milling side but not the Water, it has been a great help. Particularly interesting have been the regular reports from Peter Frow at Reichenau in Underberg; we were going neck-and-neck to start milling with water, and in fact I pipped them to the post by a few days only! 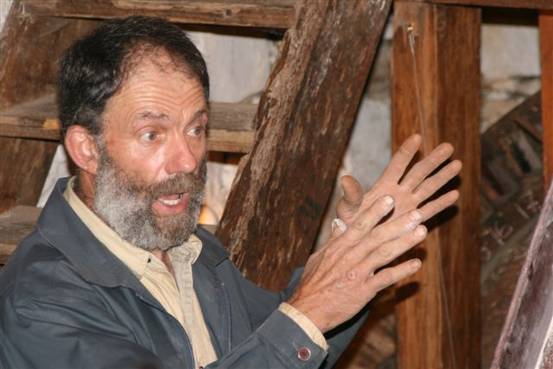 Then I thanked Keith Wetmore and his Somerset Timbers for all the help, wood, advice, calculations (like knowing that the water wheel has the capacity to produce the torque of 50 4x4 vehicles!) and new cogs for the pit-wheel. Recently we have been looking for old cold-grown pine planking for the grain elevator and delivery chutes. Prices varied, but all were many Rands per metre. Keith found somebody with a pile of planks, happy to exchange it for some wine!

The next thanks went to the Sandstone Heritage Trust for hosting the restoration stories on their website. It was a pity that although Wilf Mole had been invited, he was unable to attend at the last moment.

My other helpers, Denis Usher, Peter Boast and Stephen Sokolic were next. Several of them have clothes which were ruined with the black Iscor Black when we were restoring the water wheel. I pointed out that I don’t like forcing my hobby on other people and that on every occasion they had been there at their own suggestion. Their help was particularly valuable during the long and repetitive work on the water wheel. 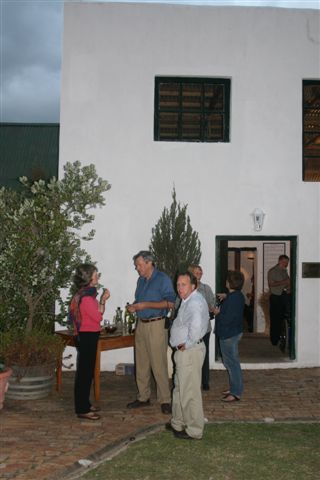 I then thanked their wives and girlfriends for letting them come and then thanked my own wife, Pippa for looking after the farm all these Saturdays and even some Sundays when I’ve been at the Mill. We have irrigation valves which need opening and closing over the weekend, so someone has to be at home!

I was given the biggest bottle of wine I’ve ever seen, as a thank you for the progress so far. The specially produced label features three of Jayne’s paintings of the Mill machinery. 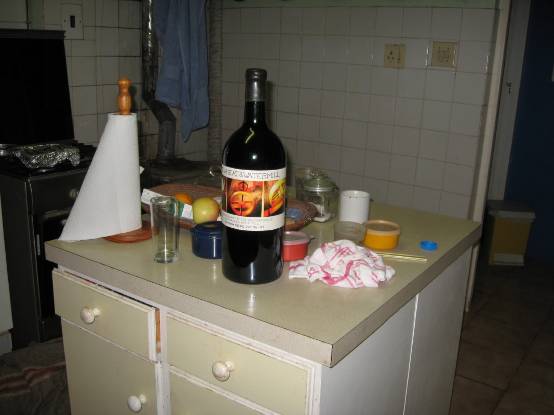 Since the Party, I’ve been able to source an ideal Archimedes Screw for one of the next projects, the moving around of the grain from the main elevator to the hoppers of the various Mills. 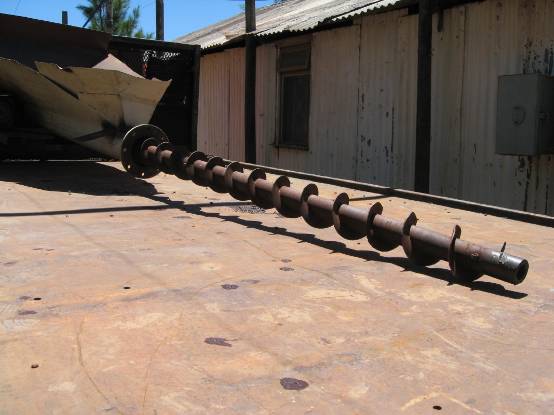 I plan to make a wooden trough for it, and cut it shorter. It will propel the grain from the end of the diagonal chute in the picture below to the Vitruvian hopper, driven by the end of the shaft with the red pulley, on the grain cleaner: 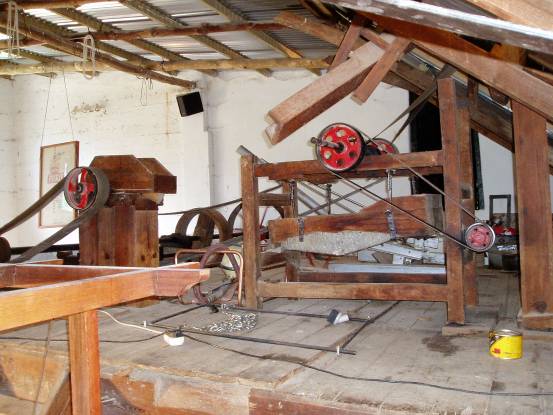 Archimedes, Vitruvius, who else of the Ancients will we be calling on?

The following Saturday’s main job, apart from doing a bit of milling, was to fill in under the long beam of the lifting beam support with cement. After erecting and levelling the beams, the bottom one was resting only on its tip at one end and a block at the other. I wanted it bearing all along. So first, I erected some shuttering. 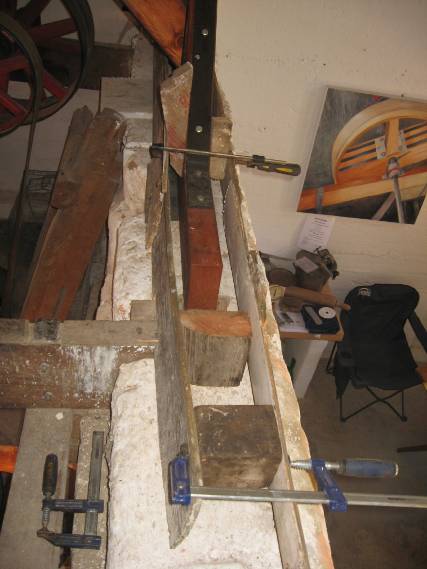 Then mixed and poured cement, really working it in under the beam. The cement was as dry as I could make it, the drier the stronger, also if it had been wetter it would have run away more under the shuttering. 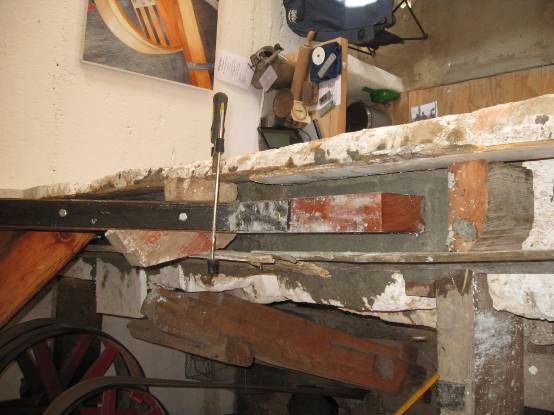 I took the shuttering off while the cement was still workable, and tidied it up a bit. 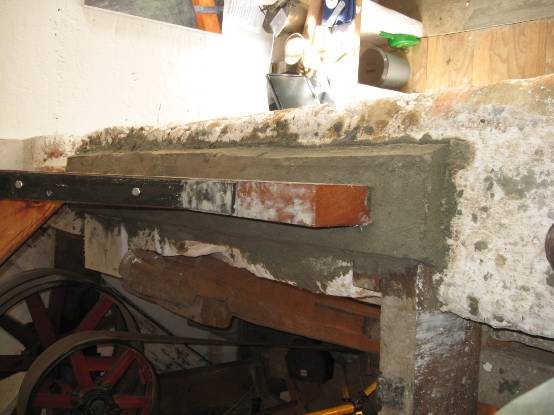 Then I started at the other end, first chipping away at the plaster to reveal mud, which I scraped away until I found something solid. There is a bulge in the wall, just below where the beams rest, the plan is to work upward from there and in under the ends of the ‘legs’. 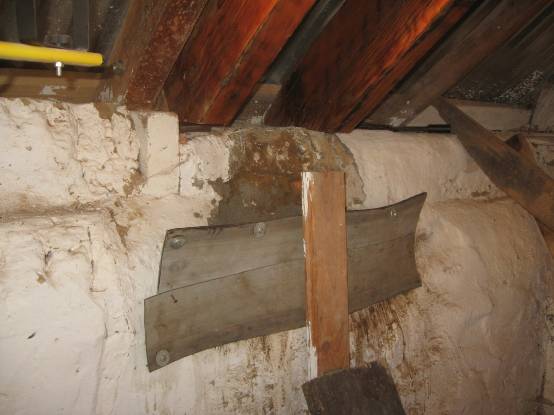 I was simply using belting as shuttering, but it was the best for following the profile of the bulge. Next time, I’ll move it up, cob-style. The bottom ends of the ‘legs’ can be seen above the chipped area.

I also measured for wood, firstly the Oregon required for the trunking of the elevator, chutes and some floorboards (I actually fell through where I’d just measured, saving myself falling right through by catching on the line-shafting!). I also measured up for the 100 short planks we need for the big Marmonier basket press, which we’re planning to restore! 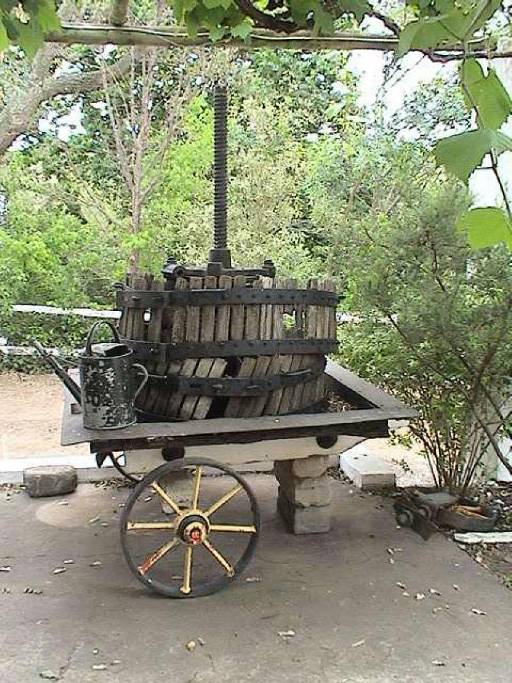