Milling with the Vitruvian Mill!

Well, that’s let the cat out of the bag, but it wasn’t easy! I thought that the remaining wobble in the Vitruvian runner stone would be easy to adjust, it being in the direction which I can set through the eye of the runner. Not so! I adjusted as far as I could and it still wasn’t enough, the rhynd was bearing up against one of the sides of the driving dog which I made: 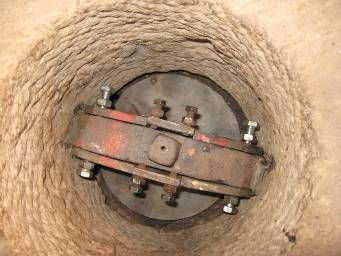 So I had to fit the cradle and lift the runner out..... 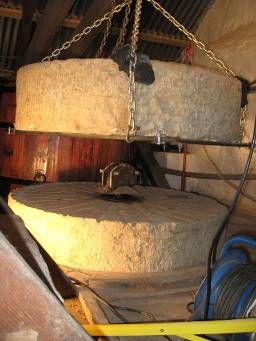 .....and grind away at that surface, until it was flush with the central piece: 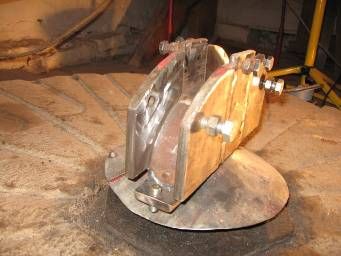 Before lifting, I checked whether I was still happy with the longitudinal adjustment on the rhynd; that seemed correct after comparing clearances at several places in the circumference. Once lowered into position, taking care to align the red markers, it still didn't seem correct. Then I detected a looseness between the rhynd and the runner! What on earth was I supposed to do about that? However, I slacked off all the horizontal adjusting screws and levelled the runner and then just brought all the screws just into contact and locked them. Hey Presto! 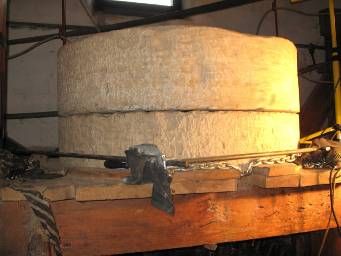 I couldn't resist it! I had a couple of handfulls of grain left, so I shook it in to the eye of the runner with a scoop, as if it was a shoe. Result?....a rumbling noise.... promising.... but where was the meal? I was also experimenting with speeds and water quantities and levels in the mill pond at the sluice, and just suddenly as the water wheel speed went over 7 RPM, meal started coming out! 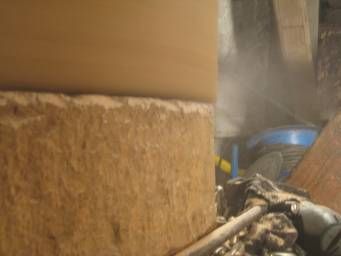 There you have it! After a break of 60 (?) years!  Fine meal can be seen on the upper edges of the bed stone and finest cake flour in the air!

When the grain was all used up, I decided to test speeds on the Stamford, so I belted up the rest of the machinery; up till then only the Vitruvian mill had been operating. The whole Mill house needs a lot more water to run it, even after I'd thrown off the belt of the Gutmann. I must have gone up to the weir at the outflow of the dam 20 times, adjusting, taking channels out of the weir, all to add more water to the flow. 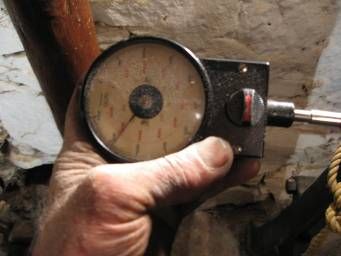 So at 8 rpm, it follows that we will have 434.... Spot on! Or at least so close to 450, the speed which was marked on the hopper until an over-enthusiastic cleaner managed to rip off the instructions! Even at this speed there was a good air flow out of the Mill at the meal-spout.

So that seems to have resolved the speed conundrum, without changing any pulleys... phew! I still would like to test the main elevator at that speed. There is still just the one bucket on the belt, so I plan to stand up in the dormer with the elevator running and to watch for the bucket and as it gets near the top I'll drop some grain into it. I can then observe whether, a, the grain stays in the bucket and drops back down into the 'down' trunking, (too slow) b, throws it across the room (too fast!) or c, flicks it just nicely into the chutes.

I swept up the meal from the rather dirty floor, complete with all the products from the grinding before, just to assess the fineness. Using the same sieve I normally use, I was pleasantly surprised to find that what stayed behind was dirt; splinters, fluff from rags, small stones, etc, but very little bran! 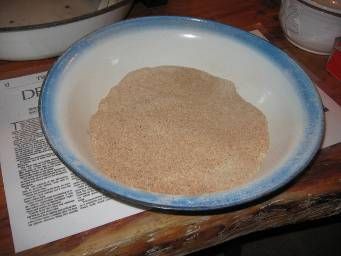 We'll have to run quite a lot more grain through before it's fit for human consumption, but I think we can say we have milled with water!

Now the tun can go over the stones! But first the 'horse' must be fitted. Working from the one picture we have of the now defunct Kleine Zand Drift mill in Bredasdorp: 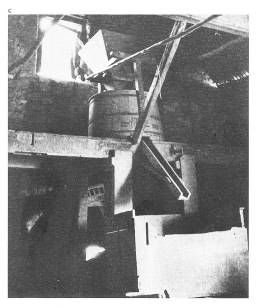 The horse is made from two tees, fixed to the front and back of the tun. Although the lower end of the front tee can't be seen, it must be fixed to the tun; otherwise its foot would be in the meal spout! During the week, I took the remaining planks from the spray tank to Somerset Timbers where Keith Wetmore and his carpenter Abie (who made the 13 replacement cogs for the pit wheel!) are running them through planers, rip saws and thicknessers. Abie will make up the tees with a tenon at the join, and I can make up my mind what length to cut the legs off. The remaining planks have been slit down the middle to make thinner planks to make the hopper and shoe, and perhaps the meal spout out of. Interestingly, Abie says it's not oak at all, and that it closely resembles our popular imported hardwood, Meranti. This is good news, if this wood isn't enough.

I had several groups of visitors; one group of USA university students with their professor. I found them having a tour of the wine cellar, and suggested they come down to the Mill. Yes, we're coming, someone said, our professor says he was at school with you! How one's past catches up with you!

Later on, there was a wedding party being photographed up at the Main House. I persuaded the photographers to bring the couple down to the Mill, where they took lots of photos and video!