The heading gets long if you don’t compile a report for some time! In truth, I have been in hospital for some of February for abdominal surgery, so that at least is an excuse! Luckily the ‘attack’ happened after the Open Day weekend, which was a phenomenal success, with a constant stream of visitors to watch the Mill working! Stephen Sokolic was a great help on the busier Sunday.

From the meal milled on the two preceding Saturdays, Nici Beaumont of Zest Catering made 91 loaves of bread; the last was sold by mid-day on Sunday. Many 1-kg bags of meal were also sold direct to the amazed onlookers and from the stalls where the action was taking place up at the Big House, along with wine tasting and sales, picnics, a marimba band and games of boules…. what an atmosphere!

Stephen kindly brought two ‘Oregon’ pine planks for the front and rear of the main elevator, but there’s been no further progress on that front. I want to set a window into the front panel so that the buckets can be seen descending. 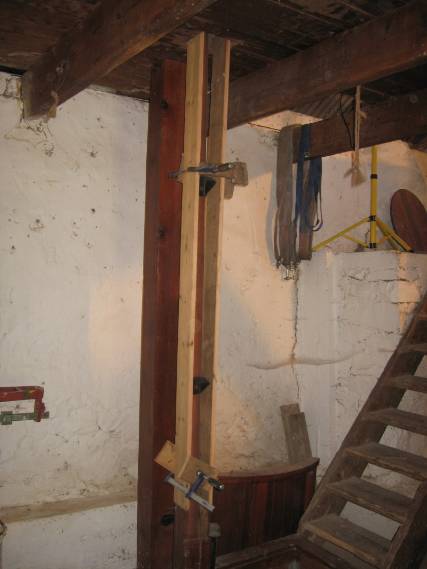 The main elevator still needs a front and a back; the front will have a glass pane, so the descending buckets can be seen.

The top end of the chute for feeding the Stamford Mill from the top of the elevator has been trimmed, but needs a bit more polishing for a snug fit. The good news is the grain does flow even after ‘conditioning’, especially as the angle (37 degrees) is not nearly the 45 degrees which I had thought necessary. I have ordered a similar metal trough to feed the Vitruvian Mill, and will experiment with that before resorting to the Archimedes screw which I have as a back-up. 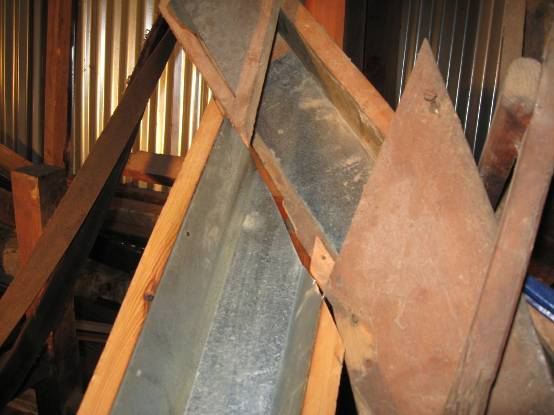 The top end of the chute for feeding the Stamford Mill from the top of the elevator still needs some trimming for an accurate fit.

It was with great excitement that we heard that a crew from the very popular National television programme ‘Pasella’ were planning to pay us a visit! The filming took place on Thursday 25th February, and the screening is expected on 17th March. The team members were extremely impressed with what they saw and took much too long filming at the Mill, causing them to have to scrub one of their other planned venues. But we’ll still be lucky to get a minute and a half on the air! 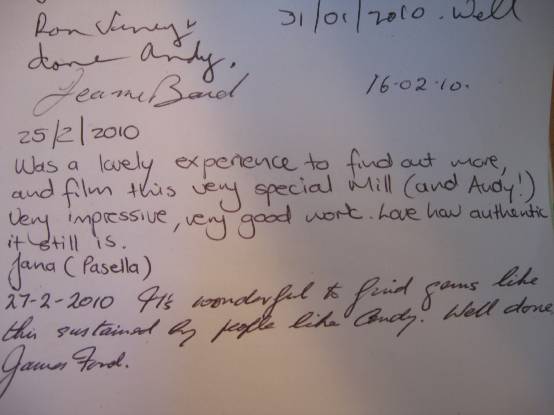 From the Visitors’ book.

For their visit I had to do some milling, as the stocks of meal were finished. Nici again baked some delicious bread, which was then written into the script.

During the Pasella visit the Mill ran most of the day, and we were disturbed by two squeaks. One has been persistent and it comes from where the stone spindle passes through the bed-stone on the Vitruvian mill. This noise goes as quickly as it comes, but not immediately after pumping more grease into the three feed pipes. I tested the temperature of the shaft immediately after the marathon run; the shaft was only slightly warm, so it’s not about to sieze.

A new noise came from the centre bearing on the axle tree. This is difficult to get to, and lately, when I turn on its Stauffer greaser before starting the water wheel, the cap of the greaser has been turning very little. 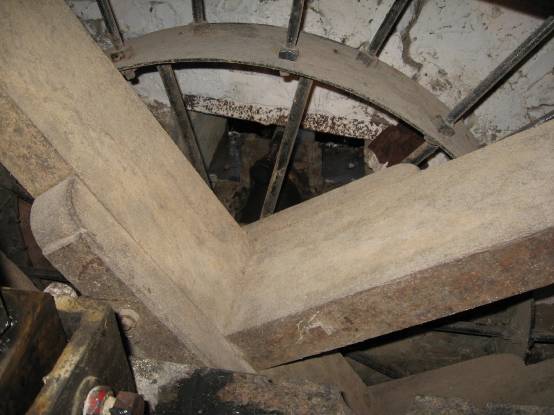 The centre bearing is set into the wall and behind the big flat belt pulley. Not much space for access!

I had to squeeze myself between the pulley and the wall and first clean off all the accumulated muck, perhaps dried grease and dust. Good exercise for a still sensitive stomach! 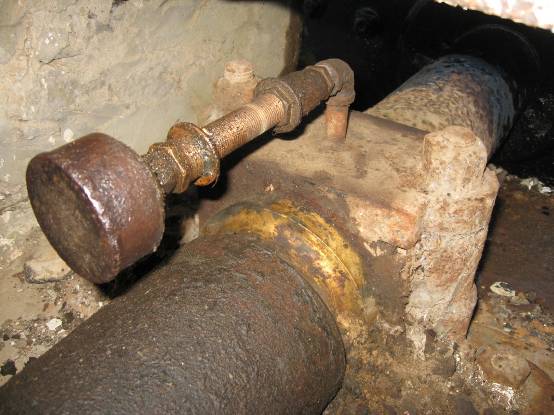 Accumulated old grease and dust first had to be chipped away from around the bearing housing. 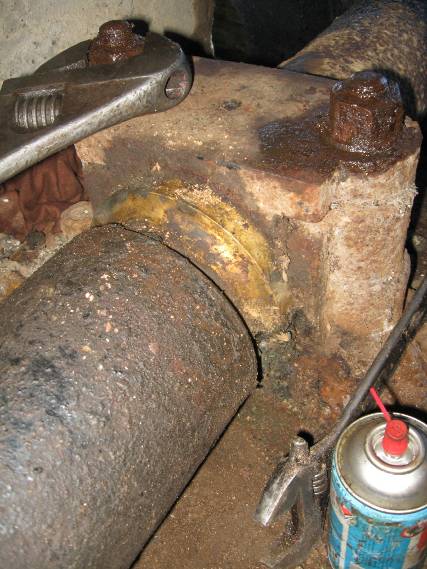 The bearing cap could then be prised off, exposing the top half of the plain bronze bearing. 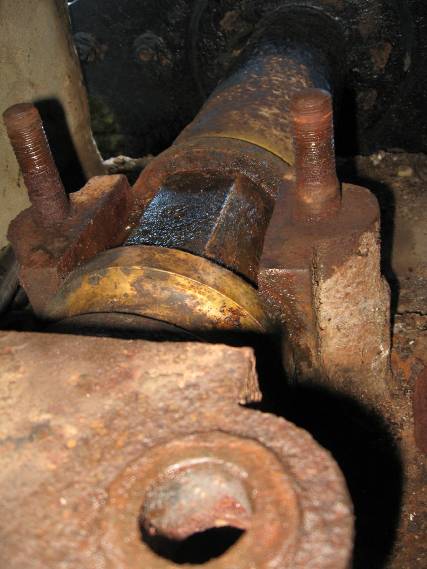 Protruding from the bearing cap was the remains of a grease transfer pipe, but not enough was left to transfer grease from the supply through the cap and into the hole in the middle of the bearing. After a lot of scraping and tapping wedges of various thicknesses between the upper and lower halves of the bearing, the top one came out. Clearly, absolutely no fresh grease has been getting to where it should be, since I first started turning the wheel! 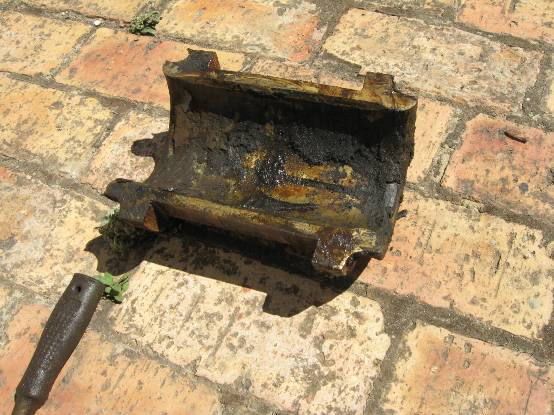 The underside of the bearing was encrusted with old dry grease, dust, and a yellow sulphrous deposit. That was easily scraped clean, with the accent on the mating faces.

The shaft was dry, but otherwise no damage was apparent. A good clean of the grease grooves was necessary on the edges of the lower half, and again the mating faces, to ensure the top and bottom halves close firmly on one another. 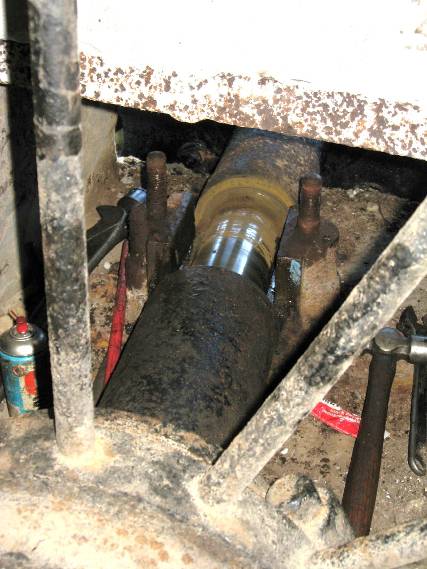 Next it was necessary to make a grease transfer pipe, flared at the top to prevent it dropping through onto the shaft. 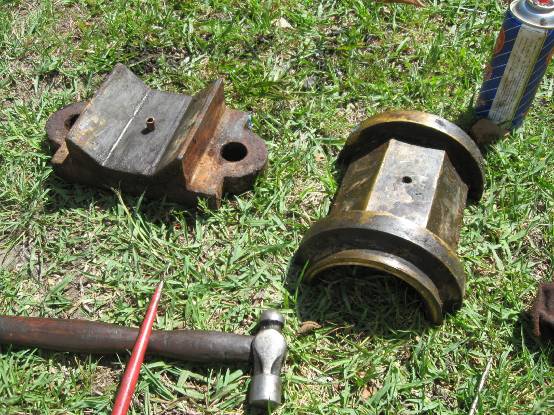 Then the two were fitted together and dropped back into place. I tested the Stauffer greaser and the assembled delivery pipe before refitting that! 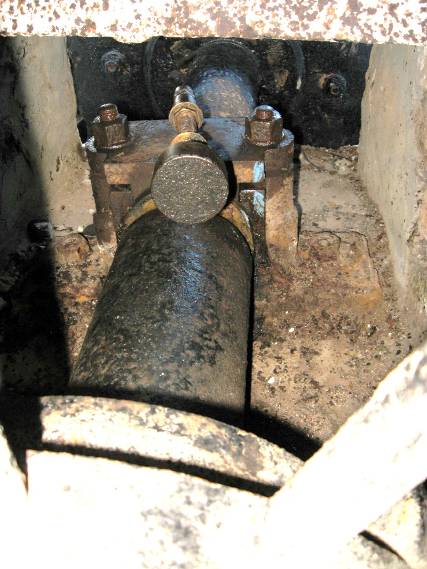 Looking a lot more clean, tidy and workmanlike! I pumped in three capfuls of grease before opening the water and running the wheel for half an hour, and then applied yet more grease!

Finally, apart from the forthcoming television exposure, we are now frequently being noticed in the media, just to show how much of an extra attraction the Mill is to the Winery. From the Burger of 6th February (seen by a customer of mine, who added the red pen!): 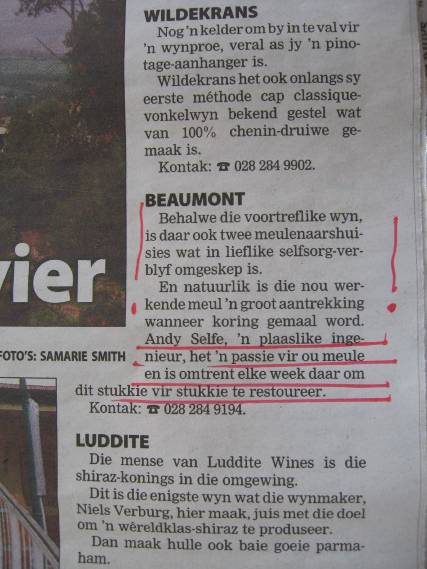 The two self-catering cottages, one the Miller’s house, and the Mill get more coverage than the ‘excellent’ or ‘first-rate’ wines! At the Open Days, we were pleased to meet, at last, Annalize and Maré Mouton, the editorial team from Village Life magazine. We look forward to a follow-up visit from them and hopefully an article in their excellent quarterly magazine.