There was just one job to finish on the downward trunk of the main elevator, that was the collar, or skirting where the trunk passes through the upper floor, and which aligns the upper and lower sections of the trunking. 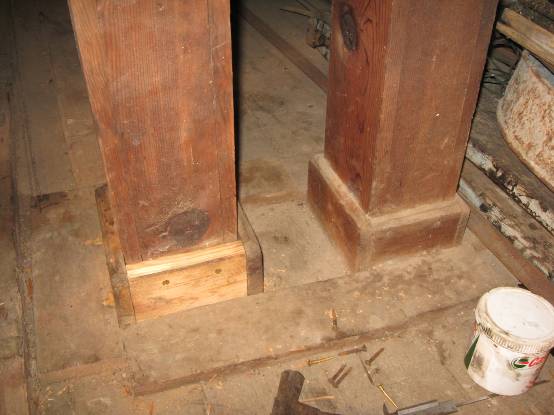 The lighter piece was made from an offcut from the batch of Oregon which Keith Wetmore organised; there isn’t much left!

It was a good thing that I hadn’t set myself too much restoration for Saturday 20th, because of the reaction to the appearance of the Mill on the popular ‘Pasella’ Television programme the previous Wednesday. Most people who know me in a dirty blue overall had much to say about my appearance in a pristine white one! But the visitors who came, although not that many, were seriously interested in the process of milling and what had gone into the restoration. They had a lot of questions and they bought a lot of meal! It was being sold faster than I could produce it! This kind of visitor is definitely my favourite, even if it keeps me from my ‘work’!

On Saturday 27th, the ABSA Cape Epic cycle race was scheduled to pass close to the Mill, and as they have helicopter-borne TV coverage, I made sure the wheel was turning before the first riders came past at 7.30am, just in case the mill came into frame! 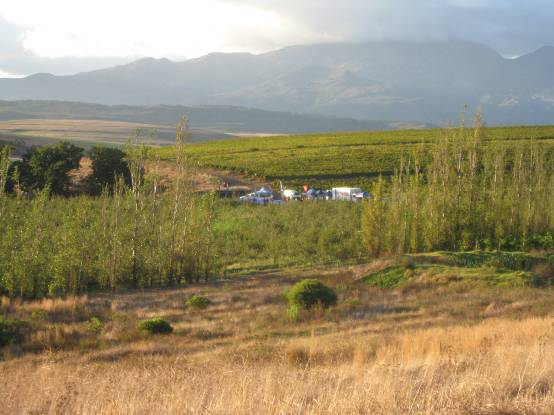 This was taken from the launder over the water wheel when I hooked up the control beam….. a grandstand view of one of the refreshment stations set up to support the riders at the bottom of the farm where the old wagon route passed.

The big job for the day was to re-align the feed chute from the top of the main elevator, making it run straight to the Stamford Mill. Previously, it had fallen more sharply on the original section, then flatter for the new part. Straightening it out would have two effects. The new section would be steeper, but the outlet towards the Vitruvian Mill would be higher, giving more fall on that section too.

So I pulled a builder’s line straight from the top of the elevator to where the chute passes over the floor beam above the Stamford and measured the angle. 37 degrees to the horizontal. 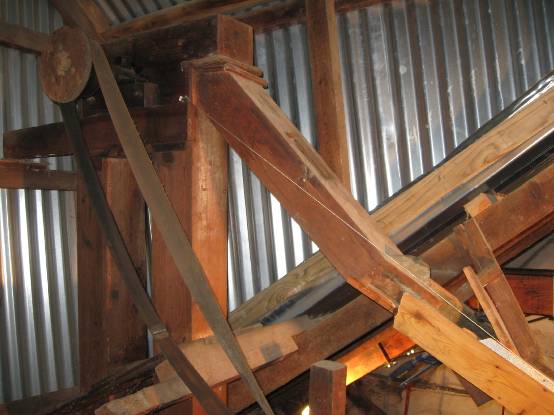 I then removed the new chute to the Stamford, then the old top section. With the angle ascertained, I could re-mark the angle at the top of the old part and cut a small amount off at the new angle, bearing in mind that there is a 10 degree offset to the right. In the process, the collar at the top fell apart and had to be re-made, again out of an off-cut. Nothing is going to waste! 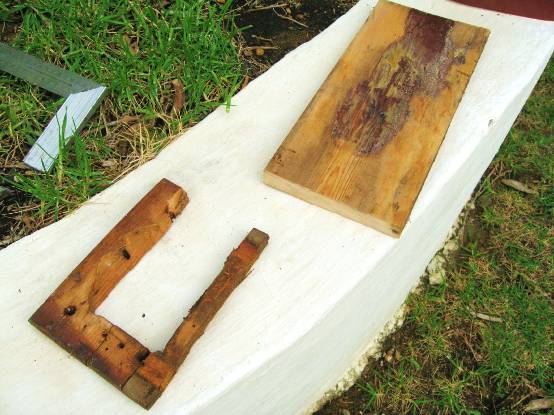 It is interesting to note that the old collar is worn on the wider side from grain being thrown at it, the screw in the middle lessening the wear around it!

Holding the old section in place wasn’t easy, while trying to fix it at the top! A rope, clamps and wire tied between two nails had to suffice to start with. I could then check that it was parallel with the builder’s line and offer up the new chute to the Stamford and trim the end of that (yet again!) too. At least with the two now in line with one another simplified the complex angle! 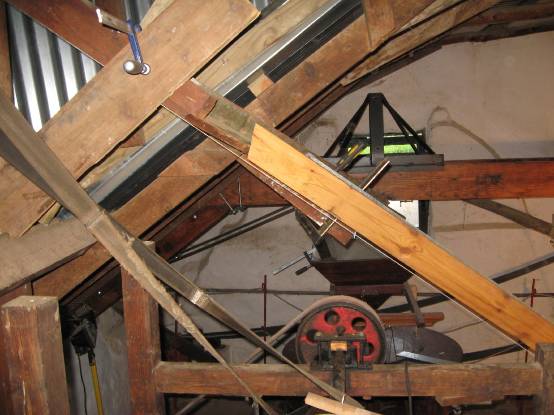 The open part will have a short chute attached to supply the grain cleaner directly below. Various supporting planks are clamped on to the top section at this stage, but later it was possible to make something more smart and permanent. 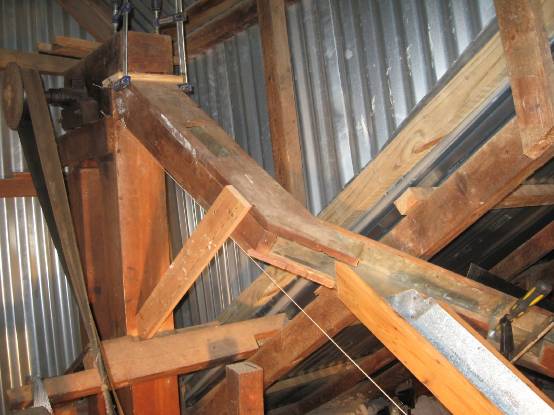 The new collar at the top is glued and clamped. There is still beading to fix to the join, although the two fit snugly together. It was also necessary to trim the lid of the box before refitting that. There is an inspection opening in the lid so one can check the grain flow; a problem which Peter Frow commented on. It’s a few quick steps between observing the flow upstairs and adjusting the sluice on the hopper below.

All this time I was milling, and with the water wheel running at its minimum of 4 RPM (anything less and the meal is simply not ejected from between the stones), I decided to drop a few grains of wheat into the ascending buckets on the elevator and watch their trajectory when the buckets reached the top. Certainly they were being thrown out into the upper section of the chute; in fact it looked as though some were being thrown out of the top! There is no ‘lid’ on the top of the elevator but there might have been one. The next test will be around 7 RPM which is the fastest we have run the water wheel, and this is the speed necessary for the Stamford Mill to run on water power.

Another problem was solved at this stage; the elevator kept jamming. I was worried that the trunks weren’t aligned somehow, but the problem turned out to be small offcuts of wood which had fallen into the hopper below. These were being brought up in the buckets but not being thrown out at the top. They were falling back into the new descending trunk and jamming the buckets.

The next test was whether there was enough fall between the top of the spout for the Vitruvian Mill and that Mill’s hopper. A similar galvanised trough had been bent up, so I offered it up and clamped it in position, as high as possible at the top and against the rim of the hopper below. 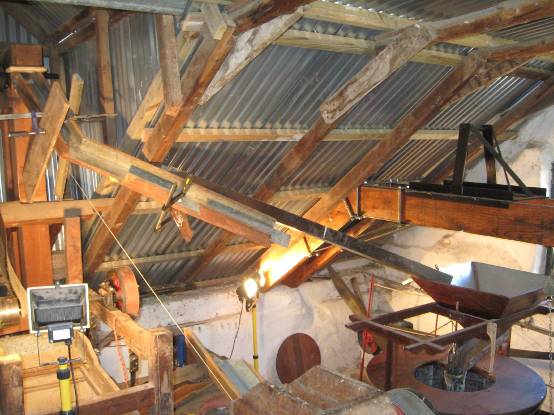 Initial experiments with dry grain were encouraging, but with ‘conditioned’ grain, the ability to flow is altered drastically, it appears!

This shows the grain stuck at the bottom, but in fact it had stuck all the way up. Measuring the angle revealed only 21 degrees to the horizontal, no wonder! This leaves two possibilities, unless anybody can suggest others? One is to make a contraption to agitate the trough; the other would be to resort to the Archimedes screw which is standing ready, dismantled out of the machine it was previously used in. Both options would use the shaft protruding out of the grain cleaner just visible behind. 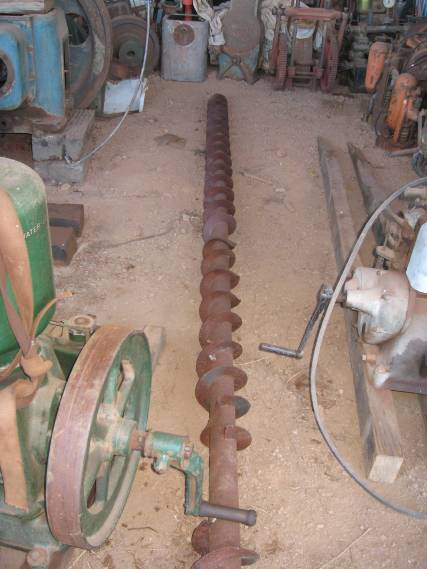 There are several disadvantages to the auger option, mainly the making of the trough in which it would have to be an exact fit, if the grains are not to be left behind. There would be a considerable amount of extra friction to add to the load already driven by the water wheel. Also the grain cleaner rocks as it works, so the drive shaft and auger shaft support would have to allow for that.

Agitation of the trough will be much easier; some kind of ‘damsel’ can be fixed to the end of the grain cleaner shaft to give the upper end of the chute one, two, three or four, bumps per revolution. I did experiment tapping the underside of the top end of the metal trough and it had the desired effect.

Several groups of visitors arrived, some from the wine tasting at the Cellar, some staying at the self-catering cottages, some casual. I managed to mill 14kg between times. I keep a note of how many 1kg bags get weighed out per sack. The last two 50kg sacks got mixed so it’s a long time since I could calculate the losses. 99¼kg were weighed out from those two sacks!