The top end of the short chute needed to be tidied where it joins with the original trunking, both at the upper end and, on the lower side, where it joins the chute to the Stamford Mill. 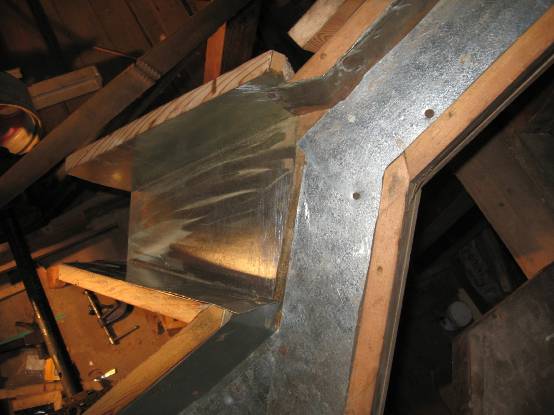 On the top edge, I peeled the metal lining off (it’s tacked on) and sawed off the protruding wood with a hacksaw blade, and bent and re-attached the lining. That was easy! At the join with the Stamford chute, I had hoped to be able to bend a single metal strip and attach both ends, one to each chute, but the angles were too complicated. Instead, each chute has an extension to its existing lining, and they just touch up together at the top, in line with the run of the main chute, so that either or both can be blocked off to allow grain to proceed past them to the Vitruvian’s chute.

Once this lining had been done, I could refit the lid of the main trunking (fairly) permanently. 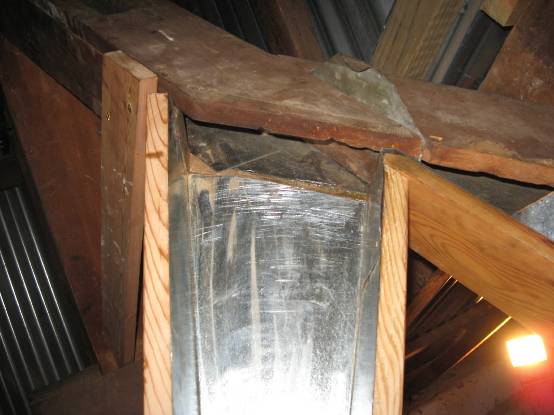 The metal plate is in the groove blocking the flow of grain to the Stamford and beyond, so any grain coming down as it is set now, will pass down the short chute into the grain cleaner. The same plate can be used in a slot across the short chute to divert the grain to the next chute, which is the Stamford’s. That chute will have to be blocked also if grain is to flow to the Vitruvian’s chute, which is further to the right.

The shallow angle remaining between here at the top, and the top edge of the Vitruvian’s hopper is the next problem. Dry grain flows easily down the temporary chute, but the moment it’s been ‘conditioned’ (dampened as required for milling) it stubbornly resists all efforts to make it flow! 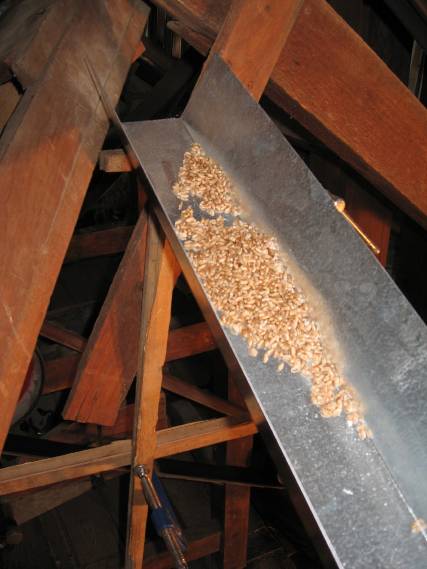 My attempts to make it flow by agitating the top end of the chute were futile! I experimented by making a temporary cam on the end of a shaft which conveniently sticks out far from the end of the grain cleaner directly below. Running on that was the end of a strip of wood, nailed to pivot on a roof beam. This produced quite a distinct up and down movement. The ‘cam’ was a bolt strapped to the shaft with insulation tape! 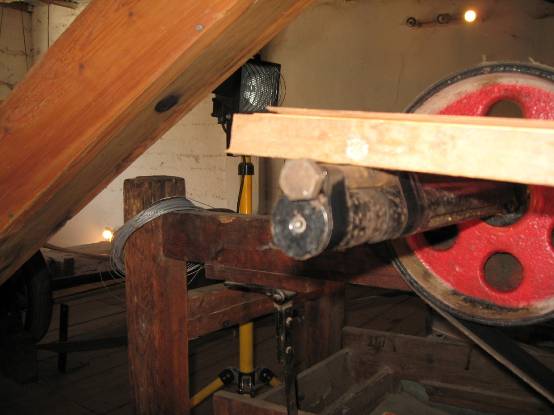 On to this wooden strip, I simply clamped another strip of wood upright, which lifted the top end of the chute and dropped it on to a piece of wood clamped there. 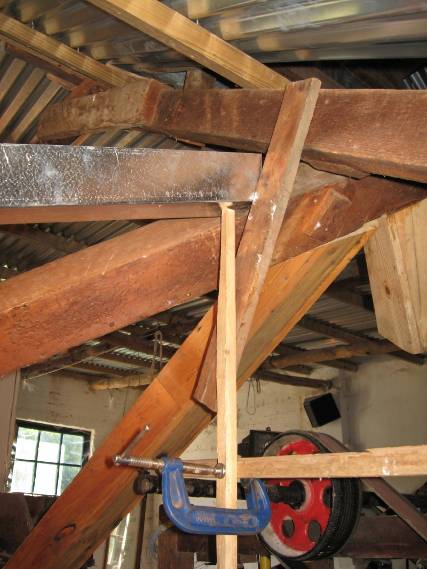 Would it flow? Not a bit of it! Even if it had, the effect of the agitation is ever less towards the lower end at the hopper. Clearly here is a case for something completely different! A conveyor belt? Initially I had written this off as too ‘modern’, until I realised that the elevator itself is a conveyor of sorts.

Johan Coertze has suggested agitation which moves fore and aft, which is worthy of more experimentation. The shoe on Stettyn Mill works in this fashion. 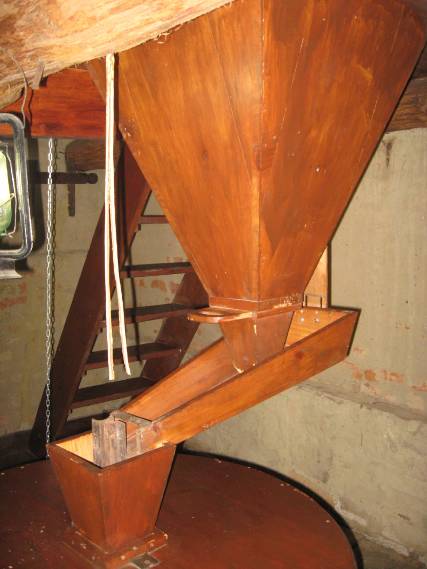 Instead of shaking laterally like most shoes, this one has a wooden leaf spring at the top end, causing the shoe to bear against the damsel at the lower end. In this case the damsel is made of two steel angles bolted back to back on an extension to the stone spindle. The important difference with this system, compared with my agitation at the top end, is that it works equally over the full length of the chute. In our case, the lower end can be supported from the lifting beams, which will not add any friction.

But first I have to find some Oregon to line the outside of the chute with. I have brought the metal part home.

There were five sets of visitors during the day, including a couple who are teachers. They have a daughter who is very inquisitive. A new aspect which I demonstrated to her was to pull a stalk of wheat out of one of the sheaves we have standing in the Mill, and to rub it between my hands to ‘thresh’ it, so she could see where the grains came from!