After the flooding of the Pandora and Vailima sections of our line a year ago we were left with some difficult choices.  However, due to tremendous support from a certified Rail Safety Regulator contractor, namely Flint Construction from Natal, we were able to combine resources, use mostly our own equipment and personnel, and reconstruct sections of the line to RSR specifications.

The true test came during Kalahari Sunrise 2012 when the line was used frequently over a 10-day period by all the locomotives in the fleet including the awesome NG15 / 4 x NGG Garratt line-up.

We have therefore been encouraged to look at our line in a more positive light than perhaps was the case before.  In addition, Kalahari Sunrise provided us with an opportunity to understand what we were capable of and provided us with fundamental building blocks that we can use to further improve our business model in the Railway Heritage sector.  We think it is important to look at it as a business because without the revenue generation that is so important we would be much more limited in what we could achieve.  The willingness of our visitors, particularly those from overseas to pay what we were charging, linked to the fact that we were able to cut costs significantly by doing virtually all the catering ourselves, meant that the bottom line was significantly improved.  Although we only made a very modest profit we were able to construct a new financial model. This should see our annual event (which will be held next year from 4th-12th May 2013) as not only an opportunity to showcase what we are capable of but also to generate revenue which can be ploughed back into Preservation. In addition it gives us the scope to keep the event dynamic and to be more imaginative.

This was only possible because of the enormous goodwill of the people who came to visit us from Australia, Britain, France, Switzerland, Germany, Belgium, New Zealand, and the United States. We thank them for that. Early indications are that many of our visitors will return next year but more importantly they will be bringing colleagues with them so that the amount of effort that has to go into an event like this is appreciated by a larger number of people.  Realistically we can only cope with a maximum of 200 people on any one day.  If we assume that 150 of those are individuals book for the entire 10-day event then that still leaves us with an opportunity to invite day visitors.

In analysing who came to our last event it is clear there are two groups.  The biggest is the genuine steam enthusiast who knows exactly what he is looking at and wishes to involve himself totally in all the railway operations, mostly for photographic reasons but in general because of a love of 2-ft Narrow Gauge steam.

The second group tend to be young executives with families who recognise that the opportunity for their children to ride behind a steam hauled train in a fairly idyllic rural environment is not something that one should walk away from knowingly.   These visitors can afford to pay the day rate, which is a pro rata rate of the entire event fee.  Realistically this is a much bigger market and so it is one that we would like to nurture and build upon.  We certainly could not justify an entire event for this group because so many of our visitors are technically competent drivers, firemen, guards, train controllers etc. and without them we cannot operate.  In fact, it is a pivotal strategy of ours to accept the fact that there are not enough qualified people in these different categories in South Africa with time on their hands to come and assist us.  Asking the qualified professionals to assist us has become a win-win situation whereby everybody achieves their personal objectives.

We have been very fortunate to have support from Transnet regarding driver certification. We also learn a lot from our foreign crews which helps us maintain the highest possible safety regime.  Drivers who have not previously ridden on the line and who as a result are not known to us will be subjected to an assessment before they are assigned to train crews.  The reason for this is that there are vast differences between individuals who drive scale model locomotives for garden railways and those who drive modern locomotives hauling 30,000 ton payloads.

To be fair everybody brings something to the party but it must be generally understood that we have to maintain the impeccable safety regime in order to be able to continue to operate as we are.  This does not mean that we will not remain exciting, flexible, interesting, diverse, and above all imaginative.

All in all the events that have been unfolding represent good news for us and  point the way towards a much more enduring living Heritage programme than we had perhaps believed was possible.  We are fallible in the sense  that  everything needs to come together on the day and it is likely that some of our locomotives will start to fail their boiler certificates but we have enough depth to get around that.

One particularly interesting aspect of our operations has been the lack of support from other Heritage groups such as the Agricultural sector.  One of the reasons that we have shifted next year’s event into May is to allow the very competent Western Cape Tractor enthusiasts whose centre of operations is in Villiersdorp to attend.  For some years very few of them have been able to support us because of the fruit picking season in the Western Cape.  At their specific request we have adjusted the dates and we are looking forward to welcoming a number of these professionals, all of whom are very happy to get their hands dirty.

It is a big world out there with lots of people in it. These people can be broken down into dozens of different categories, all under the broadly based Living Heritage umbrella.  We believe that Sandstone is not just a pre-eminent 2-ft Narrow Gauge Steam destination but provides an opportunity for individuals who are interested in old cars, tractors, road steam, military and other categories to enjoy their particular preference, and if suitably qualified to become involved. Ironically by combining all these elements we provide a much richer and more authentic experience for the professional photographers who always turn out in large numbers.  One of the remarkable things about Kalahari Sunrise was the breadth and depth of the feedback reports we got.  We are still working through them but we are picking up some consistent recommendations that will almost certainly become policy in the future. Nearly all are in favour of diversity – i.e. a model T at a level crossing or our wonderful ageless span of oxen alongside our 1895 Lawley. 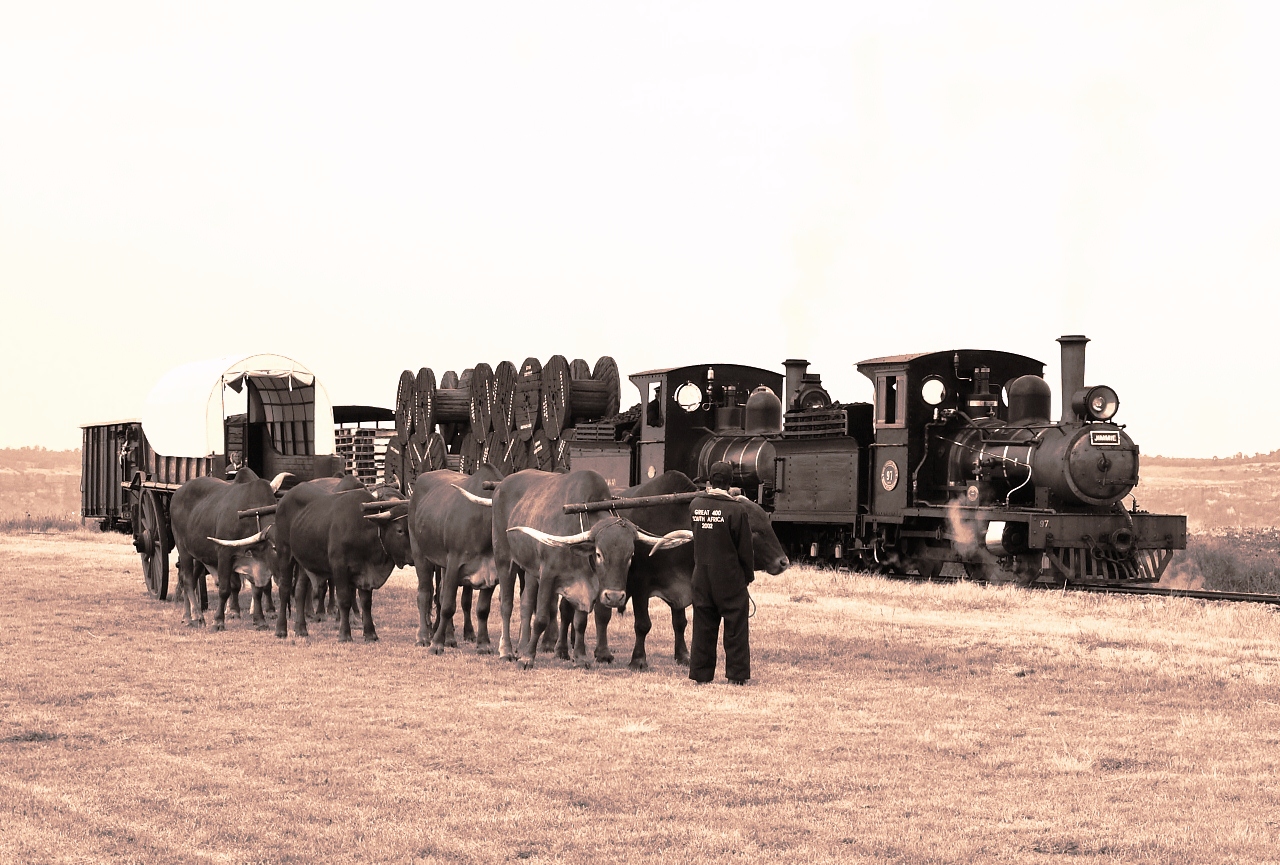 One of these includes on farm accommodation, and with that in mind we have commissioned a project to build 10 railway cottages along the railway line at Hoekfontein.  These will be 2-bedroomed self-catering cottages.  It is not clear when they will be completed but we expect to get this project underway within the next few months.

So for all those people who perhaps read into our statements that there was an element of doom and gloom we can say that due to resilience, creativity, and support from unexpected quarters, we have been able to not only deal with the issues that concerned us at the time but actually put together a much more upbeat, optimistic and expansive business plan for the future.

It is still a tough call for the farm to generate sufficient revenue to even begin to subsidise everything that needs to be paid for.  It will take some years before we can arrange events that are so well structured that they generate a major financial contribution to the farm.  We therefore appreciate the work of our volunteers, we appreciate the donations we receive from well-meaning people, however small, and we commend those supporters who come back to see us year after year who have recognised that we do offer something special which if supported and nurtured can become even more magical .

There will be justification for some criticism in the future but we have adopted a very upbeat and positive mind set which says that we regard such comments as positive guidelines to further improve the way in which we do things.

South Africans are uniquely competent at operating under difficult conditions and I have no doubt that the team at Sandstone will continue to grow in strength as they gain further experience.  As the visitors to Sandstone will testify they are a young group and without them very little would be possible.  The Trustees of the Sandstone Heritage Trust and the owners of Sandstone Estates commend our team for their contribution.

Finally, to our supporters – please rest assured we will strive ever harder to make every return visit better than the previous one.