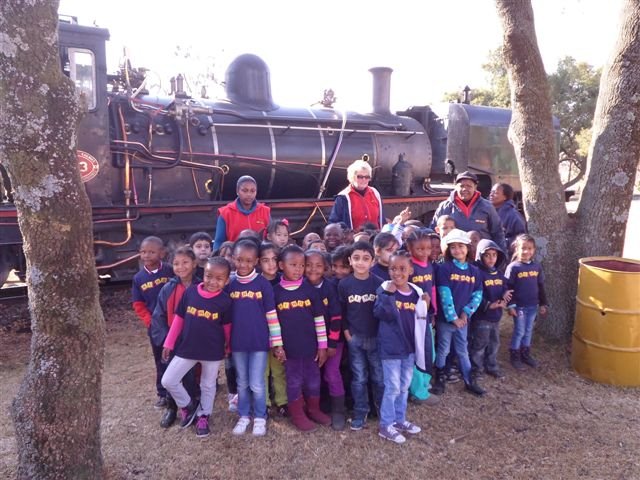 Sandstone Estates shares joy doing something good for the community.

On Friday 8th August 2014 Kindi Pre-Primary School visited Sandstone Estates for a train ride and picnic. 36 very excited children aged 5-6 arrived on Sandstone Estates at 8:30am, gathering round old steam train Garratt nr. 153 which was carrying 2 open Ratanga wagons, 2 closed passenger coaches and the guards van. They had a quick lesson on the Garratt from Mrs Barrett, teacher and principal, who explained to them how the locomotive works and steams before the children were split up into groups (each group with an adult to supervise). The train left for Grootdraai and you could hear the children screaming and singing with excitement. As the train stopped at Grootdraai, the kids ran around, some dancing and shouting “this is the best day of my life”. After 10 minutes the train went back to Hoekfontein Station.

Following this they all sat down for their picnic. Sandstone handed them each a packet of chips and they enjoyed their sandwiches and a cold drink, also celebrating a little boy’s sixth birthday. After eating birthday cake the children stepped forward and thanked Sandstone Estates for the wonderful train trip. They broke up into groups, each group singing a song to the Sandstone staff at the Waenhuis.

After a walk through the Steam sheds, they lined up for a lollipop and with hugs they left Sandstone to go back to school.