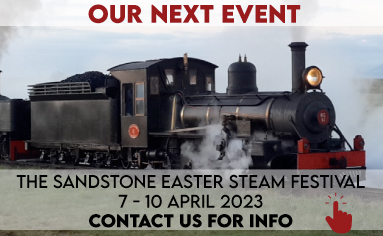 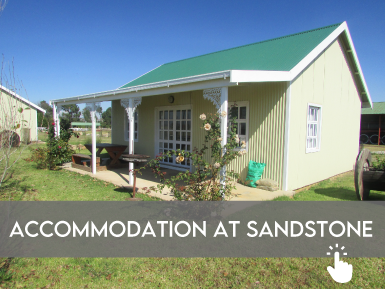 Sherman Tanks played an important part with the South African troops in the World War II campaign in Italy. The following information is taken from the book South Africa in World War II, A Pictorial History, edited by John Keene of the SA National Museum of Military History.

'During November (1943) the (6th) SA Armoured Division was ordered to rest as many troops as possible in order to prepare for an attack on Monte Sole. Field Marshall Alexander visited the division on 4 November. The armoured regiments were re-equipped with Sherman tanks mounting 76mm and 17-pounder guns and 4th/22nd Field Regiment, SA Artillery, was equipped with Sextons (self-propelled 25-pounder guns). The warning order for the division to prepare for operations against Monte Sole was received on 30 November......'

This is what my father; Lt. J H Selfe of the Natal Mounted Rifles had to say at the time:

They'd learned the way to recce in blinkin' armoured cars,
They knew the war the desert way, the spaces and the stars.
They didn't want to know about this changing to a tank,
And nearly every one of them just reckoned that it stank.
A bloke was heard to tell his mate (while filling final drives)
"We'll never find no glory, chum, in flicking Sherman Fives!"

They went across to Italy when spring was in the air,
They wrestled there with problems fresh of tank war over there,
But long before they'd had a chance to find the proper way,
The game was on, to lead their Div. straight on to come-what-may.
In spite of this, and eighty-eights, and comrades losing lives,
They belted on to glory in those flicking Sherman Fives.

And then they made them infantry, those reckless recce boys,
And made them to walk and climb and play with different toys.
They thought a lot but what's to do? They learned the job. And the
Attacking with support of tanks, they mounted tanks again.
No matter what they thought this time, their homes, perhaps their wives,
Again they smashed to glory riding flicking Sherman Fives!

The make-up of the 6th SA Armoured Division, from the same source: 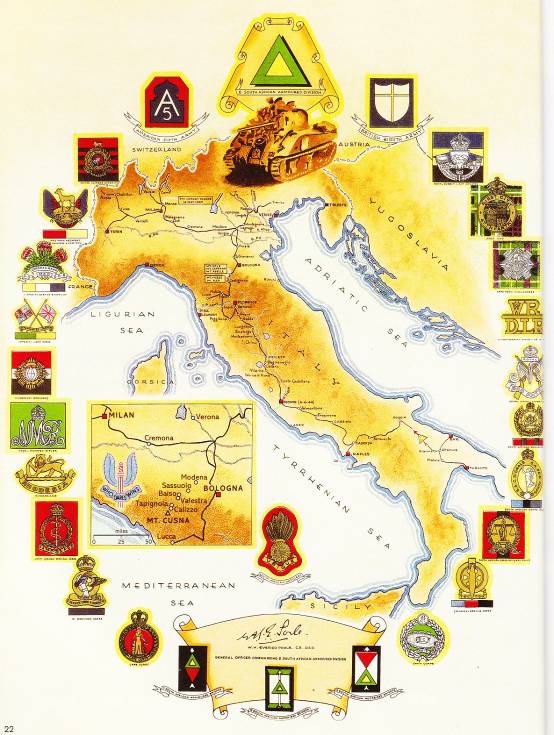 There was a critical shortage of infantry in this Orbat.. Major A B Theunissen, MBE (formerly SA Staff Corps) takes up the story in a paper written for The South African Military History Society:

On 24 May (1943) General Poole was informed by Eighth Army HQ that 24 Guards Brigade Group was coming under his command. This order was not only a signal personal honour for the GOC, but also, by virtually doubling the division's infantry strength, gave him much more flexibility in fighting the enemy in mountainous country. In fact, when it became clear that the Guards Brigade would be leaving the division, General Poole announced the formation of 13 Bde on 7 January 1945

The infantry components of the Brigade Group were 1 Scots Guards, 3 Coldstream Guards and 5 Grenadier Guards, who were among the most experienced units in Italy. The Guards Brigade fought as an integral part of the division for nine months until 18 January 1945, the three battalions suffering 1 227 casualties. They proudly wore the 6 SA Armd Div flash and when the Brigade returned to Eighth Army command, some of the men tried to keep wearing it!

The Pretoria Regiment, whose armour had supported the Guard's battalions throughout, were granted the unique privilege of wearing the Household Colours on their headgear. Many lasting friendships were made - I, whose duty it was as G2 to keep close contact with brigade majors, established a life-long friendship with Major (later Brigadier) Tommy Bulkeley, Brigade Major of 24 Guards Brigade. 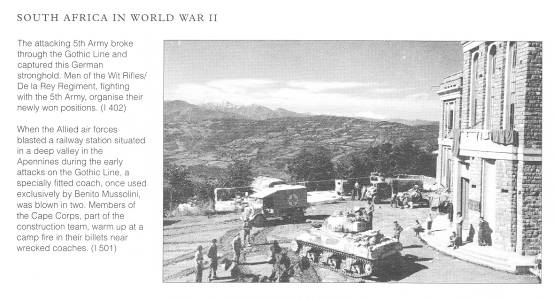 On 26 June, the BBC news recorded that the Guards Chapel had been destroyed by a flying bomb the previous day, Sunday, 25 June. Although 24 Guards Brigade Group had been under command for only a month, it was already fully integrated as part of 6 SA Armd Div and the South Africans shared in the sorrow of their British comrades, so much so that there was a spontaneous move to donate a day's pay from every man in the Division to help with the Chapel's reconstruction after the war. The GOC subsequently handed a cheque for £5 125 to Field Marshal Sir Harold Alexander (from memory, on 6 November 1944, when he visited the division). The Guards Chapel in LONDON is well worth a visit, preferably on a Sunday morning, when the duty sidesman will happily indicate the 6 SA Armd Division's commemorative plaque paid for by the Chapel's congregation after the war. 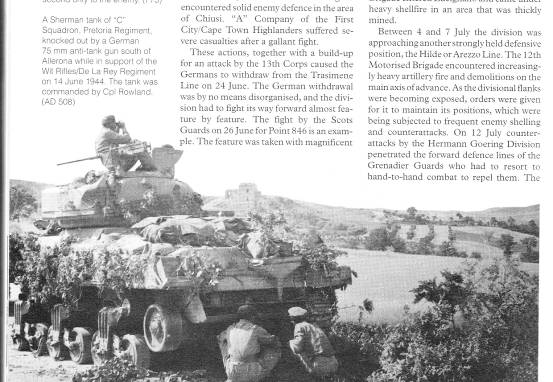 The ubiquitous Pretoria Regiment, as usual supporting 24 Guards Brigade, managed to get tanks to the very tops of the mountains. Small wonder that Eric Linklater was impressed enough by these performances to mention them in his delightful Private Angelo, an amusing read for 6 SA Armd Div veterans, particularly if they had also had a spell in operations in the Western Desert. 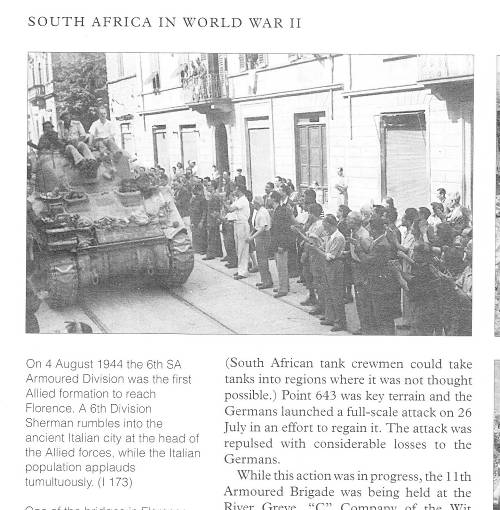 6 SA Armd Div was the first formation to enter Florence on 4 August 1944, having had nearly two months of hard fighting against a determined enemy since passing through Rome on 6 June. 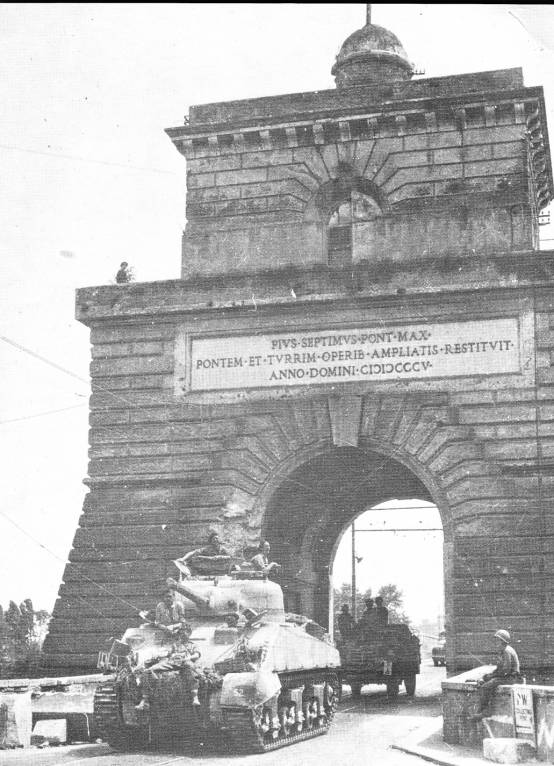 General Poole issued an Order of the Day in which he mentioned some interesting statistics. For example, the Divisional Engineers had built sixty-five bridges (one a day!) and had made 196 major deviations necessitated by 'blows' and demolitions. It was a sad day when the CRE, Lieutenant-Colonel Copper Gilson, DSO, was very seriously wounded by enemy artillery fire on 23 July. 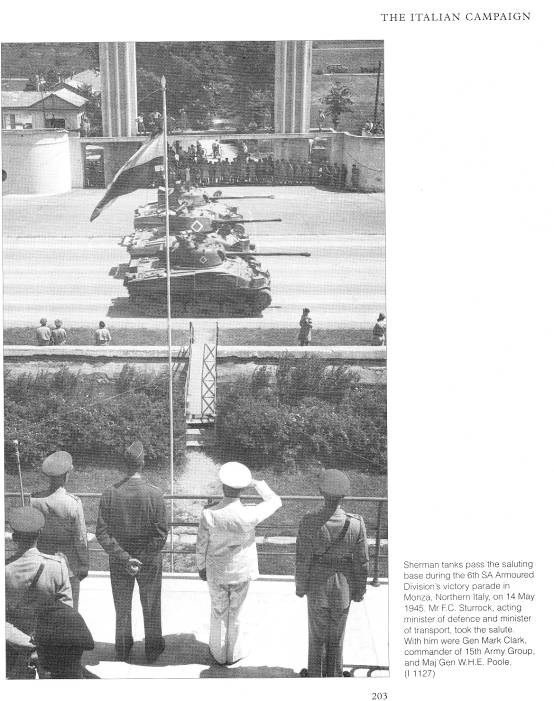 On 14 May the whole of 6 SA Armd Div assembled on the Monza race track, complete with its tanks, artillery and vehicles. The Guard of Honour was formed by the Special Service Battalion (SSB), General Poole's first command. As General Smuts was in San Francisco writing the preamble on Human Rights for the United Nation's Charter, he was represented by the Acting Minister of Defence, Commodore the Hon F C Sturrock. Commodore Sturrock made the speech, bringing the division the thanks of Field Marshal Smuts and the people of South Africa for its part in the victory in Italy. He also took the salute (for a very long period!)

The top brass included General Mark Clark (who inspected the SSB Guard of Honour before the march past), General Lucien Truscott and Lieutenant-General Wallis D Crittenberger (IV US Corps), all three having had the division under their command during operations from the ARNO to the ALPS. Lieutenant-General Sir Pierre van Ryneveld and Major-General Frank Theron were the distinguished South African generals present, together with senior Allied officers, including Italians.

The parade was led by the ubiquitous Tac Div HQ command jeep with its two star plate and, as usual, flying the GOC's pennant which so many men had seen during the year-long trek from Cassino. General Poole stood smartly at the salute as the battle-worn jeep came abreast of Commodore Sturrock, with me at the wheel and the wireless operator in the back, crowded in with both his sets. The Air OP pilots coincided their fly-past with the head of the huge march past. The command jeep then broke away, so that General Poole could join Commodore Sturrock at the saluting base.

During the proceedings General Mark Clark, presumably in his capacity as the senior US officer in the theatre, decorated General Poole on behalf of the President of the United States with the Legion of Merit (Commander), the highest award which could be made to a non-American citizen. The decoration obviously took General Poole completely by surprise. (General Poole was awarded the CBE on 7 July).

Regarding the move of the Shermans back to SA, at a party at the end of the war, at Lake Maggiore where Gen Poole was living, this passed between Gen Poole and FM Smuts:

General Poole could not resist the opportunity of alerting General Smuts to the requirements of military training in the post-war period in the Union. He said that every effort should be made to ship the division's armour to the Union. 'It is available virtually for the asking, Sir. It is the chance of a life-time.'

General Smuts cut him short: 'General, if I were you, I would bring all 6 Div's tanks here to Stresa, load them on to the barges and sink them in the deepest part of Lake Maggiore.' General Poole was clearly taken aback and obviously hurt. General Smuts put his hand on the GOC's shoulder and quickly said: 'General, by the time you will need tanks for training, your division's tanks will be out of date.' No more was said and the small party enjoyed the brief opportunity for relaxation.

How wrong he was! This photo was taken at Walvis Bay training grounds in 1967 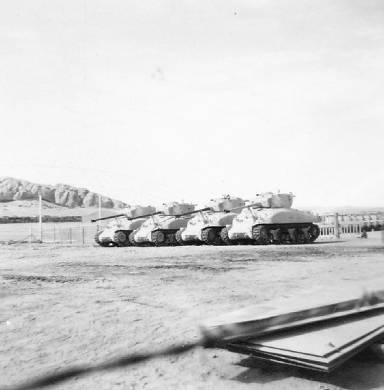 More on General Poole and the 6th Div:

For an unprejudiced verdict on General Poole and 6 SA Armd Div a succinct summary has been recorded by US General Mark Clark in his military memoirs. 'One of my visits (on his appointment as commander of 15th Army Group, succeeding Field Marshal Alexander) was to the 6th South African Armoured Division, under a most competent leader, Major-General W H E Poole. This unit had previously been shifted to the Fifth Army front, and had performed splendidly under adverse conditions. It was a battle-wise outfit, bold and aggressive against the enemy and willing to do whatever job was necessary.

'In fact, after a period of day-and-night fighting, the 6th had in an emergency gone into the line as infantrymen. When the snow stalled their armour they dug in their tanks and used them as artillery to make up for our shortage of heavy guns... Their attacks against strongly organised German positions were made with great élan and without regard for casualties. Despite their comparatively small numbers, they never complained about losses. Neither did Smuts, who made it clear that the Union of South Africa intended to do its part in the War - and it most certainly did.' Enough said!