All along we’ve been referring to the Sherman in the Sandstone Heritage Trust collection simply as a 'Sherman Mk4'. Apparently, it’s not as simple as that, according to William Marshall, who knows his Military Vehicles well! 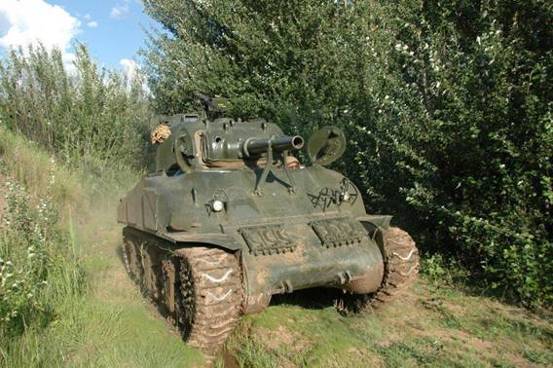 Your Sherman seems to be a postwar modification, this happened quite a lot when the UDF started to run out of spares for the Sherman tanks. It has a M4-1B 105mm Howitzer turret, the hull is that of a Sherman Firefly 1C Hybrid which is quite unique in the sense that it is the combination of a cast and welded hull.

Interesting to see that it still has the traveling lock for the 17 Pdr on the front hull. The .30 Browning in the hull was removed (welded close with plate) as it had to make space for the radios which were relocated from the turret as the 17 pdr took up all the space in the turret. The British could only make the 17 pdr fit into a T23 turret, which was the biggest turret available by installing it upside down. Your tank also seems to have a no-standard engine hull conversion. 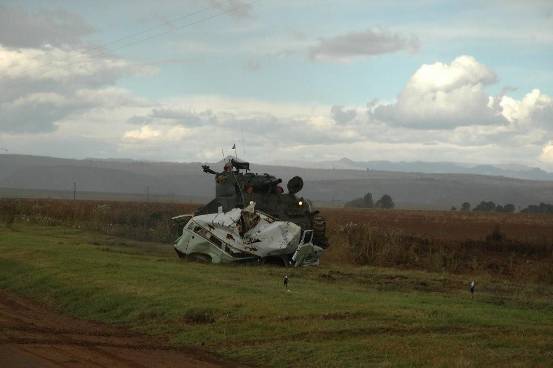 Wouldn’t we all like to do this to a taxi some days? 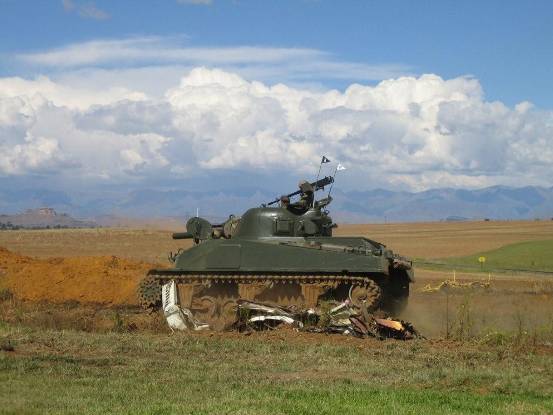 I asked William for more info on the Sherman Fives my father wrote about in his poem:

The M4A4 Sherman V was a completely different beast, as it had the Chrysler A57 Mutibank engine which had five production 6-cylinder car engines arranged around a common crank. This design had 30 cylinders with 5 belt driven water pumps, you can imagine that it did not fit into a standard Sherman hull, so they extended the hull and created a longer version to accommodate it. An identifying feature was the spacing of the wheels which had larger gaps between them than the standard Sherman tanks. Various other internal modifications wrt the fuel tanks also had to be made. 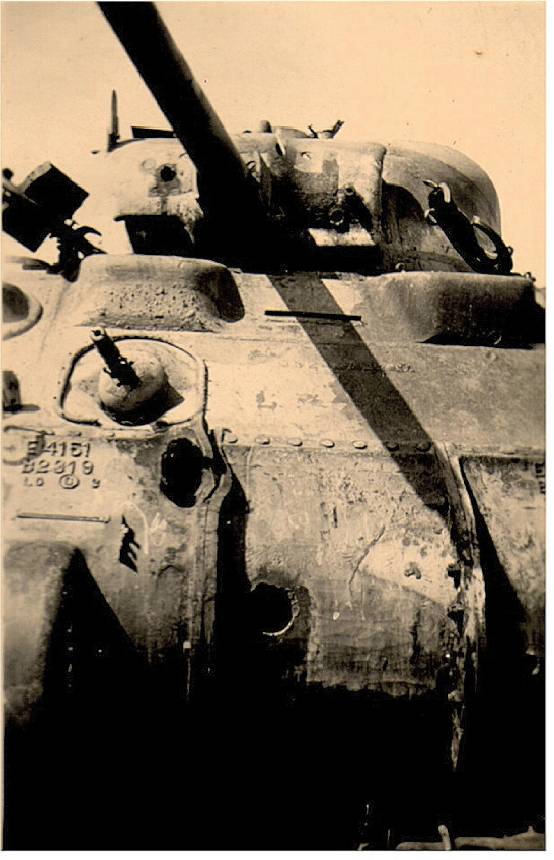 Andre Steenkamp sent in this picture recently of an SSB Sherman hit during the battle of Celleno, SSB’s ‘Baptism of Fire’. Two hits seem to have caused the hull machine gunner some grief. The fabricated hull can be seen, quite different from the example in the Sandstone Heritage Trust collection.

My father was not far away from Celleno at the time, as he describes in his book ‘The Story of my War’: 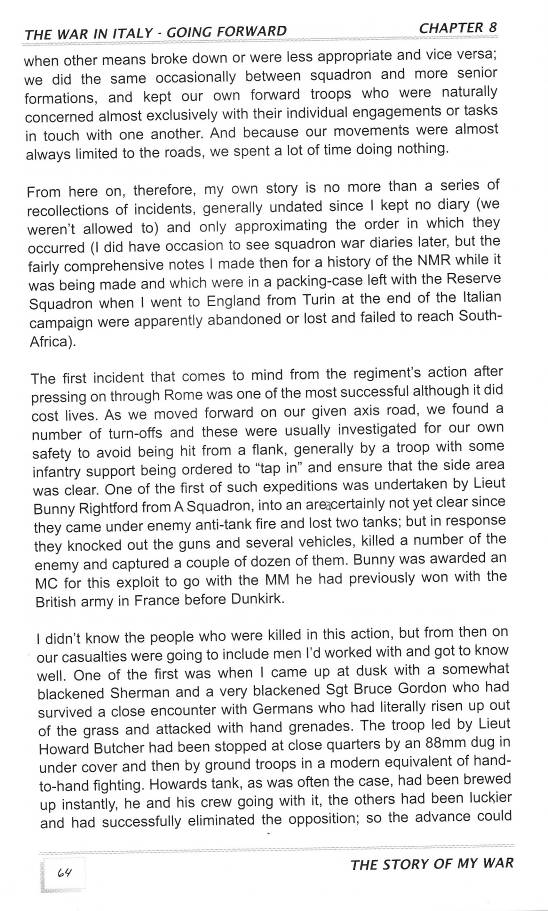 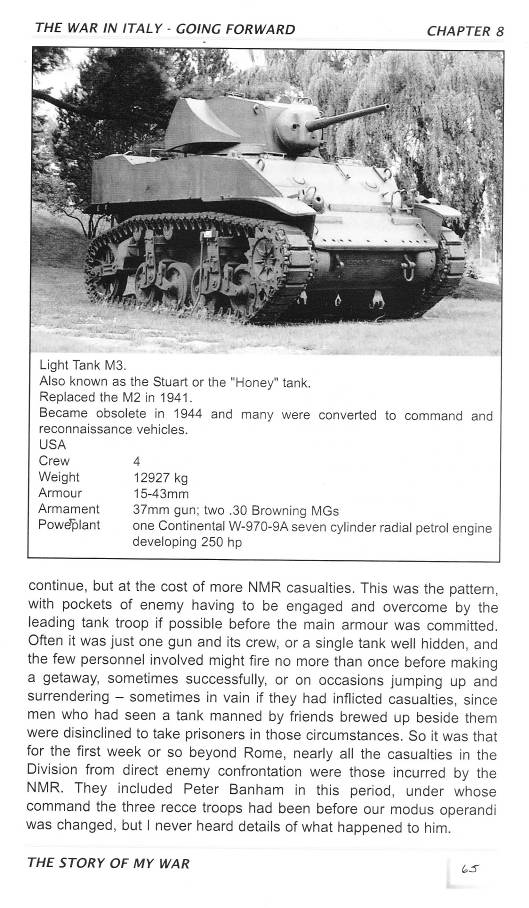 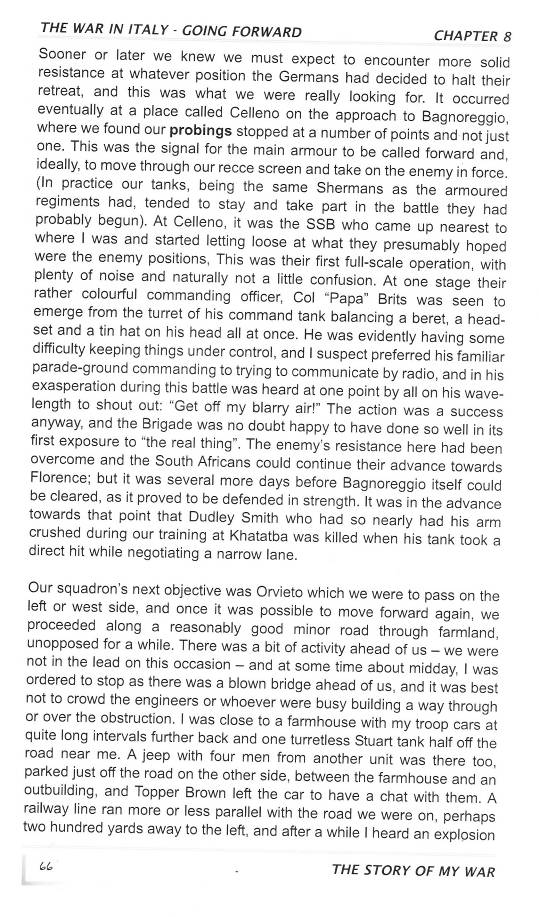 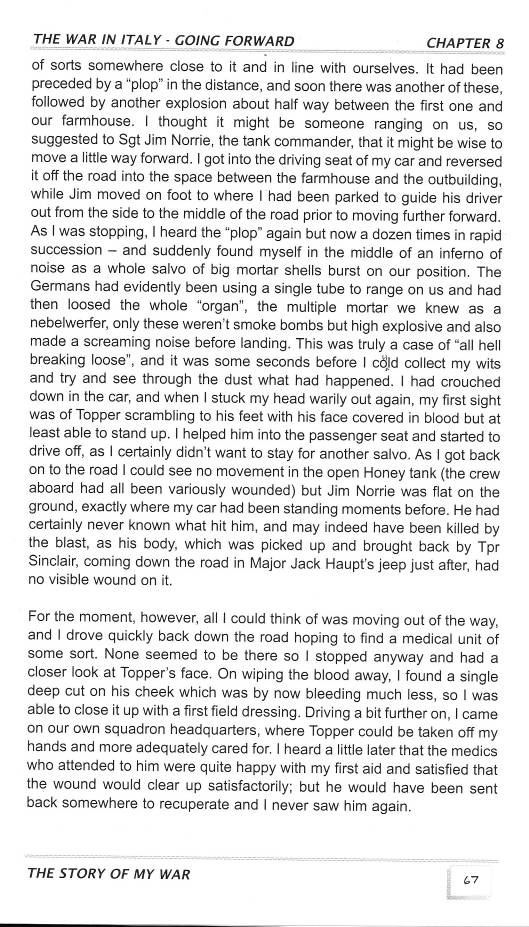 In that way, people either survived to fight again, or were killed!

During Nov 44 the M4A1(75mm) tanks were replaced with the M4A1(76mm) and the M41C(17pdr). The M7(105mm) Priests were also replaced with the Canadian Sexton as the ammo was causing logistical problems for the Division. During Apr 45 some of the M10(3") were converted to the 17pdr version called a 17Pdr M10SP (British designation Achilles), these were never used as the war ended during their conversion.

Hope this gives some background

Many thanks to William Marshall for this detailed information!

Following on from the information received from William Marshall regarding our Sherman, we received the following e-mail from Frank Collingwood:

A slight correction on the US designator of your tank – it’s an M4 Composite, NOT an M4(105). Here is an example of an Australian one: http://anzacsteel.hobbyvista.com/Armoured%20Vehicles/australianshermansph_4.htm

I sent a message via the feedback page, it doesn't seem to have gone through, so please could you pass this on to Andy Selfe

William Marshall seems to have sent you a considerable amount of misinformation about your tank. I'd like to give you the correct information as follows:

First, a little background information on the M4/Sherman. In US service, the Tank had the "M4" designation, followed by the model designators (eg M4A2). The British were in the habit of naming tanks supplied by the US after US generals, it was the British who named the tank "Sherman", and this is how it was known in British service. American tank crews picked up on this practise, but as far as the pen pushers in the US army were concerned, it was an M4 and NOT a Sherman

1. Your tank is not a "Sherman Mark IV". It is a late production M4(105) (US nomenclature) or a "Sherman Hybrid 1" (British nomenclature). The giveaway is the hybrid cast/welded hull - early production M4s (Sherman 1s) had a fully welded hull.
2. William is incorrect in saying that the travel lock distinguishes it as being a converted Firefly. The travel lock is in the correct position for an M4(105) (Sherman Hybrid 1). The Firefly travel lock was on the rear (Engine) deck, and NOT the glacis plate, as yours is
3. William is confusing US and British nomenclature when he talks of M4-1Cs and M4-1Bs. No such designators existed, there were M4s (US service) or Sherman 1Bs (British service), but never M4-1C or M4-1B.
4. William is incorrect in saying that the hull is that of a "Sherman Firefly 1C Hybrid". Such a beast never existed. The "Sherman Firefly 1C" was a "Sherman Hybrid 1" that had been converted to mount the British QF 17 pounder anti-tank gun in a STANDARD M4/Sherman turret. Your tank is an unconverted late model M4(105) or "Sherman Hybrid 1"
5. William is incorrect in saying that in the Firefly, the hull machine gunners position was deleted to make room to mount the radios - In the Firefly, a large armoured box was welded to the back of the turret bustle, and this is where the radios were installed. The deleted hull machine gunners position in the Firefly was used for ammunition storage. The hull machine gun mount on your tank was plated over post WWII in UDF service.
6. William is incorrect in saying the 17 pounder gun was installed upside down, it was installed rotated 90 degrees axially. This was to facilitate loading from the left hand side, and had nothing to do with the size of the gun. The main limiting factor in installing the 17 pounder in the Sherman turret was the recoil distance, and this was solved by using shorter recoil cylinders.
7. William is also incorrect in saying that the 17 pounder gun could only be fitted in the T23 turret. In fact NO Fireflies carried the T23 turret, all of them carried turrets exactly the same as the M4 turret your tank mounts, with the previously mentioned bustle modification, as well as a modified (Larger) loaders hatch to ease ammunition replenishment, as the 17 pounder round was too large to be easily passed through the standard loaders hatch. The T23 turret was designed around the US M1 76mm gun, and was used on models like the M4A2E8 and M4A3E8, and looked completely different to the turret your tank has, and completely different to the Firefly turret.