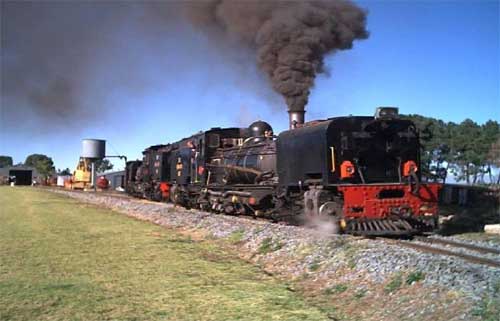 
All the locomotives that were used on the David Rodgers tour were cleaned. The wash out plugs were fitted back and the boilers were filled. Des and Arno loaded wood at Pandora and Petrus chopped them into suitable pieces. The fireboxes were packed with wood and coal for lighting up on Thursday morning.

NGG 13 No 49
49 were steamed for the David Rodgers tour. We neede to fit flexible pipes between the units, for the copper pipes kept breaking off, due to the movement between the units and the boiler. The springs on this locomotive needed to be taken off and sent away to retension them. We spaced all the springs to enable the frame to lift away from the wheels, but they kept on collapsing which resulted in the frame moving down. The pony wheel flanges barely cleared the frame and in some cases where there was an uneven part of rail track, it stuck and this was extremely dangerous and could have led to derailment on a curve.

THE HUNSLET DIESEL:
The wheels were collected last Friday. Piet Viljoen from Denrus Engineering phoned me and stated that the inner wheel bearings are defected and some housings are cracked. The crank pins are oval and cannot be machined anymore, because the pins will then be to narrow. The new crank pins will cost R1050.00 each. When the wheels return with the new crank pins, Des can start to machine the bushes. The good news is that it could be possible to use the old bushes again, for the new crank pins will be bigger than before. There is still two weeks left before the wheels will be finished.

THE CLASS 16CR:
Oupa finished the paintwork on the 16CR and will start with the little diesel locomotives outside


Ben finished the PE coach windows and fitted them. We actually need to paint the other PE coach as well, for it was difficult to get the same cream paint. There is slightly a difference between the two and would like to have both of them identical.


The two handrails were fitted to the Dining Car.

RAIL CARS:
Des fitted the new clutch kit and it works great The Wickham is completed.
Des will be finish with the slide bar and crosshead slipper by Thursday and will then start with the BSA again.

We steamed 113 on Tuesday to get all the locomotives at the coal shed for coal.

The roller was steamed as well and Chris Wilson and Arno operated it for the photographers.

FRIDAY MORNING:
We left the shed early this morning at 04h30 and coupled to our train in Hoekfontein station. We departed at 06h10 for Grootdraai with the Kalahari and waited for sunrise. While we were busy with the photo run pasts at Grootdraai, 113 and 49 left the Station for photo run pasts at Mooihoek station.
The Steam crane was steamed, but suffered from injector failure and the fire was dropped.

The best part of the day was the double header to Vailima. This train departed at 14h25 for Vailima with 113 and 49. Locomotive 49 returned light loco to the shed, while 113 performed run pasts on the Vailima ext line. They were busy till dusk and returned to Vailima just after 18h00.
A special thanks to all the kindliness of the photographers, I think we all did enjoy the two steam days. This is really a part of my life that I missed the most, everyday working steam!
I also want to thank Pat Ackerman and Shaun Ackerman for assisting as drivers for these two days. It really means a lot for me to specially have the two brothers as volunteers.