Sandstone Heritage trust has concluded negotiations with Rovos Rail which will see its GMAM garratt hauling Rovos Rail's Pride of Africa trains in the Pretoria area.
GMAM Garratt no. 4079 was built by Beyer Peacock at their Gorton, Manchester, works in 1956, works no. 7677, one of a batch of 35 which SAR ordered in December 1955, 12 of which were contracted out to the North British Locomotive Co. of Glasgow in order to meet very tight delivery dates. 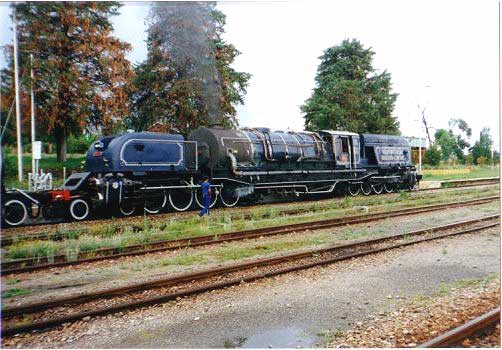 The GMAM locomotives were fairly advanced for their time having Commonwealth Cast Steel Beds and bogie frames and roller bearings on all axles. Welding was employed extensively in the firebox construction and mechanical lubrication was provided to many places. In order to keep weight down the main water supply was carried in an auxiliary tank.
Having a light axle load they found widespread use around the system in particular on lines from Mason's Mill in Natal, at Worcester in the Western Cape and on the Vryburg to Mafeking line. Other strongholds were the Eastern Cape for the Montagu and Lootsberg passes and the Eastern Transvaal lines from Waterval Boven and Breyten to Vryheid in Natal. Some were even hired to Zimbabwe and Mozambique during times of motive power shortages in these neighbouring countries.

On completion of its SAR service 4079 was purchased by Randfontein Estates Gold Mine and became part of their large fleet of similar locomotives. Following the dieselization of most of the system the locomotive fleet was stored at the locomotive depot until 1997 when Sandstone Heritage Trust purchased three locomotives 4079, 4088 and 4114. 4079 was in the best condition and was overhauled by the ex REGM foreman and other Sandstone staff at the REGM workshop, the work being completed in 1998 when the locomotive was steamed to its new Eastern Free State home at Ficksburg.
Since then it has seen little use and is in excellent condition. Rather than just let it deteriorate it is being transferred to the Rovos Rail headquarters at Capital Park in Pretoria and after boiler certification, mechanical inspection and repainting in Rovos Rail corporate colours it will haul the Pride of Africa in the Pretoria area and become a worthy stablemate to the Rovos Rail 25NC, 19Ds and 6 Class.