After a 4 day safari, The Avontuur Adventurer tour train reached its destination of Avontuur at the end of a 283 kilometre journey from Port Elizabeth on Friday 9th September. Hauled by NG15 class locomotive, no: 17, one of the type that originally worked this line, the train traversed the longest 2ft narrow gauge railway in the world without any incident. This locomotive, which is normally based at the Sandstone Heritage Trust in the Eastern Free State, was taken by Sandstone's own road transport to Port Elizabeth especially for the trip. After the tour the locomotive will be returned to its home base. 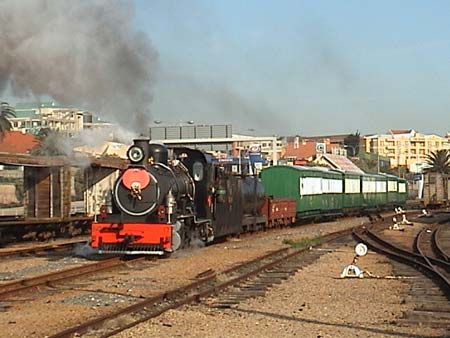 Conceived by Sandstone Heritage Trust and run in conjunction with the world famous Apple Express in Port Elizabeth this was the first steam hauled passenger train to run the full distance of the line since 1996. The section from Assegaaibos to the terminus at Avontuur has also not seen regular traffic for over 20 years. 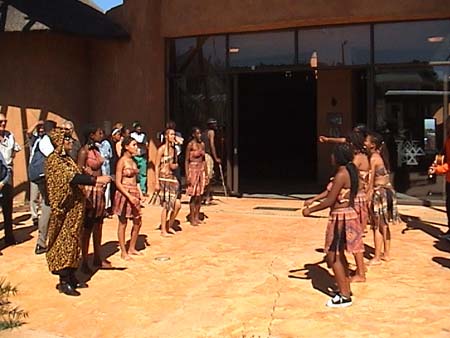 The line runs through the Gamtoos Valley and into the Langkloof before terminating at Avontuur.
With lines of this nature under threat of closure by Spoornet, the tour was run as a visible demonstration of the viability of running tourist trains the full length of the line. Throughout the event there was massive interest from towns and people along the route with the overall sentiment that the line must remain open for future generations to enjoy. Local communities by the lineside were encouraged to meet the train at its frequent stops and provided food and accommodation for the tour group in Patensie and Kareedouw as well as setting up informal markets for the passengers. Many local dignitaries also greeted the passengers.
Although tourism can provide impetus for the line, the transport of freight is critical to its long term survival. Many industries and farming operations straddling and close to the railway are very ken to put their goods back on rail. This in turn will reduce the pressure and impact of heavy road vehicles on the R62 road through the Langkloof. 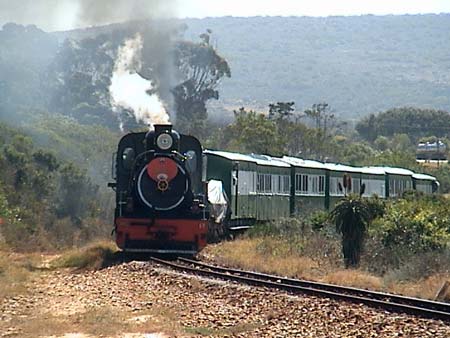 30 overseas guests and a number of local passengers enjoyed the 4 day experience. Numerous stops were made en route to enable photographs to be taken and we expect wide media coverage in local and overseas rail magazines in the near future.
Local media interest was intense with both SABC TV news and Radio Algoa covering the trip. Paul Ash from the Sunday Times and Ivor Markman from the Herald in PE travelled on the train and will be doing feature articles on the tour.

The passengers arrived in Port Elizabeth on Monday 5th September and were hosted to a civic reception by the Nelson Mandela Metro. On Tuesday there was a short run to Chelsea behind the Apple Express NGG16 Garratt no: 131 and then guests were talken off to Coega Harbour for a tour and on to Schotia Game reserve for the evening. 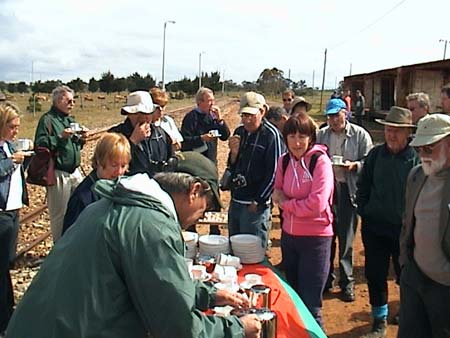 Wednesday the 7th saw the tour start in earnest with a run to Patensie with lunch taken with a local community caterer at Loerie. After a tour of the citrus plant and a braai supper, guests stayed over in Patensie at the local B&B establishments. The next day the train moved on to Assegaaibos (Kareedouw). A light seafood lunch was enjoyed at the Humansdorp Cultural Centre where the townsfolk had laid on a short programme of entertainment to complement the lunch.
Leaving early on Friday the train moved on to Avontuur where there was a huge reception from the local population. Photographic opportunities were enjoyed along the way and the overall opinion from the passengers was that it was an excellent tour. 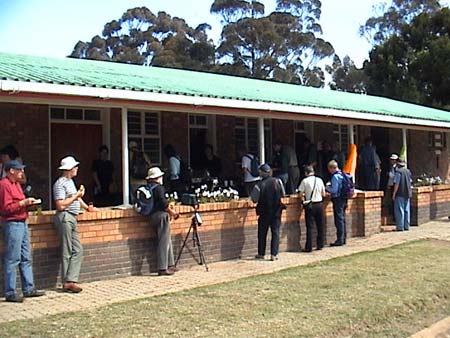 By running the train, Sandstone Heritage Trust and Apple Express have proved that it was possible and that the line's potential for tourism in the future, either on long trips such as this or in shorter sections, was extremely viable. The essential ingredient of freight needs to be brought back into the mix to ensure day to day viability but moves are already afoot in the local municipalities to ensure that the "Adventure Line", the longest 2ft narrow gauge railway in the world, will survive for future generations to enjoy and in a profitable and economic manner. 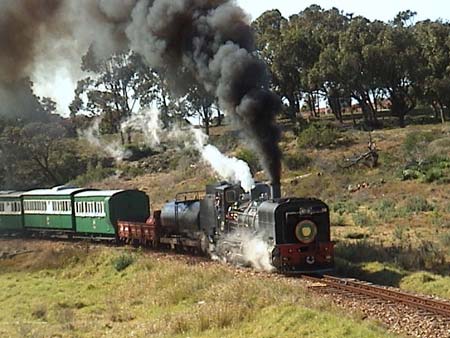