RN 94 - The Avontuur Adventurer - Behind the scenes! 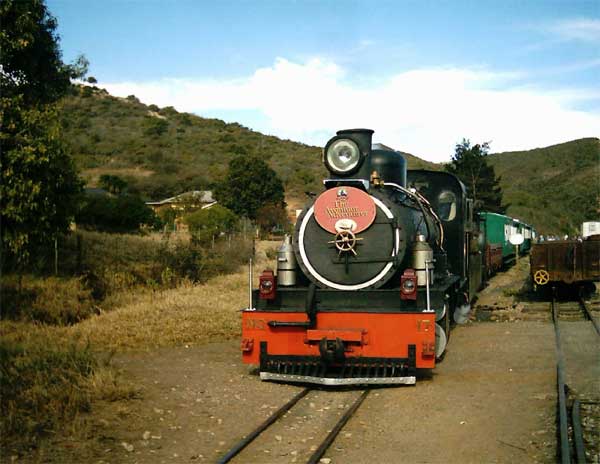 The guests arrived at Port Elizabeth on Monday 5th September and stayed over in the Kelway Hotel. This was the last day for us to clean and prepare the Kalahari for the train tour. The tender and extra water tank wagon was filled with water, while Manie coaled the locomotives.

TUESDAY 6 September 05
NGG 16 number 131 was specially steamed to haul the passenger train from Port Elizabeth to Chelsea. This train ran as train number 33504 to Chelsea and as 33505 back to Port Elizabeth.

The train departed at 09h00 and the whistle sounded joyfully. With driver Hannes Nel and fireman Mark Ruddy we were sure that we were going to have a safe and unforgettable journey to Chelsea. At Chelsea the tables were taken out and it was time for some cake and tea. While everyone was enjoying them, the locomotive ran around the train and the driver and fireman prepared the locomotive for the return trip to Port Elizabeth.

After the train arrived back in Port Elizabeth, the tour group was taken to the Scotia Game Reserve at Coega. The Garratt was stabled and we all went to rest for the trip to Avontuur after we had received a precautionary fire course by the local Fire department. 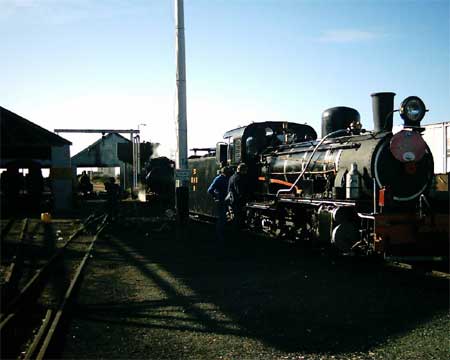 WEDNESDAY 7 September 05:
The Kalahari was steamed up for the ride during the early hours of this incredible day. The Sandstone team arrived at the Humewood Steam Shed at 06h00 and the Kalahari NGG15 number 17 was polished up, for this special lady really took my breath away.
The train departed at 08h30 from Port Elizabeth bound for Patensie. She ran as train number 33506 to Patensie again with driver Nel and firemen's Ruddy and Derrick van Zyl.

Lunch was served at Loerie station and this gave us a perfect opportunity to service the locomotive without wasting precious time. We arrived at Patensie just before sundown. Dinner was served in a big tent on the station platform.


The passengers enjoyed every second of the train ride. This was a once in a lifetime experience for all of us. Photo run pasts took place at only selected places alongside this beautiful countryside.
The train was accompanied by two Locomotive Inspectors.Mr. Hennie van Rooyen and Mr. Adre Steyn. We also had a special guest onboard the train on Thursday, the Steam Curator of Spoornet.

We reached Assegaaibos Station just before sundown. Some of the local community awaited the train at the station. The passengers left for their Hotels and we had a wonderful "Railway party" on the station platform. With music in the background, and a fire in a old wheelbarrow, we all were back in a nostalgic era. These use to be how the old Railway people would enjoy a night and I would not change this for the world.

The train departed at 08h15 as train number 33510 on the last section of this awesome narrow gauge railway line. According to all the local people, it was the first time in seven years for a Kalahari to go over this spectacular line to Avontuur. 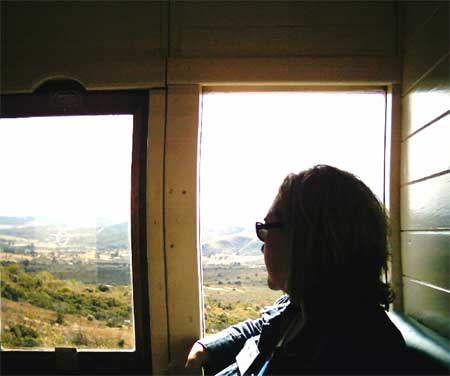 We also needed to take water despite the extra water tank wagon that was coupled to the Kalahari's tender.

Driver Hannes Nel and Fireman Mark Ruddy reliving the past.
Magic moments were caught at the end of the day, near the end of the journey, a farewell to a great journey.

We arrived in Avontuur just about sundown. The Station was crowded with people from the local community and Derrick and I had our hands full to keep them off the footplate during the night.

All the passengers on the train, for their support and kindliness.
The local community at each overnight station.
The Apple Express, you were great!
The Apple Express Tavern, Bruce and Sandra Strang. You were real lifesavers and an mobile oasis on this long journey.

We easily forget the people working on the background, which made an essential part of this successful journey. Without them, it could not be possible for us to reach the end safe and sound. 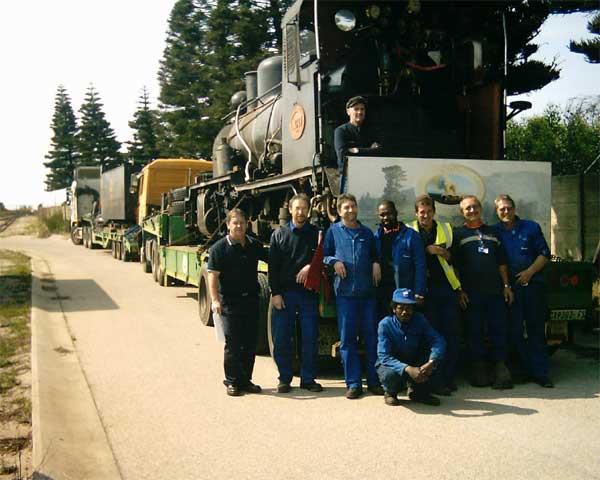 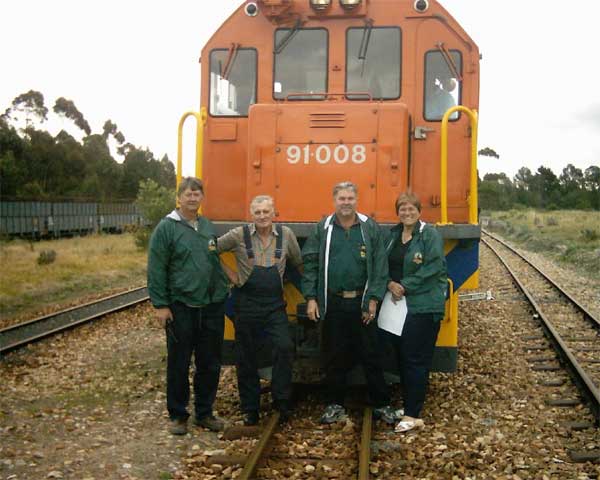 ABOVE FROM LEFT TO RIGHT:
Mr. W. Ferreira the Train Manager
Mr. Hannes Nel the Train Driver
Mr. Hennie van Rooyen the Loco Inspector.
Mrs. Lesley Lowe from the Apple Express.
Thanks are also due to:
Mr. Sydney Terreblanch (Steam Loco Fitter) Apple Express who helped with offloading and loading of Kalahari and also with preparation of the Kalahari and who we couldn't get him to stand still long enough to photograph!
Mr. Cliffe Nel who were responsible for the interior of the coaches who also managed to dodge the cameras!