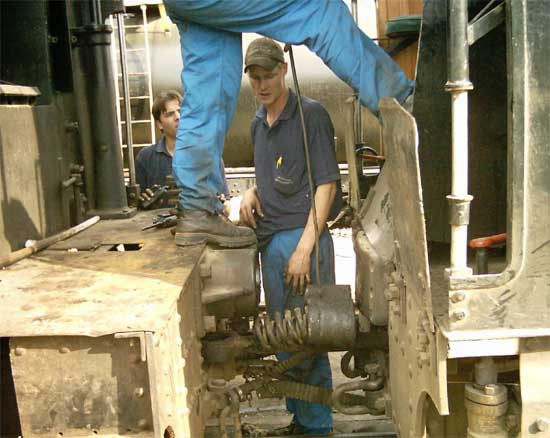 INTRODUCTION:
This week saw a very busy week at the Steam Shed. We are trying to catch up with the backlog of work still to be done. Each and everyone made a huge effort to make a remarkable progress. The previous report was taken to last Monday, and all in this report was done in four days only.

THE KALAHARI:
Derrick started with the modifying of fire bars for the Kalahari on Monday and was finished on Friday. The Kalahari will now have brand new shaker bars that will work more easily when cleaning fires. In these days of modern technology there is no time and by speeding up the time to clean fires, minimizes delays during operating days. This however does not end here, and a number of smaller locomotives with no shaker or drop rates will be modified to make it easier to clean fires. With modern Diesel locomotives, there are no delays to service stops, and by minimizing service stops with steam locomotives, we could actually place Steam in a better light under the more sceptic Railway enthusiasts. We also await quotes for a “better than A grade coal” for all the smaller locomotives. By using this very rare coal that is actually just for export purposes, we would be possible to operate little locomotives without any fire cleaning necessary. This coal actually just burns away and forms no clinker at all. It is very rich on oils and makes real black smoke without using a lot of coal at one time.
Here is Derrick busy with the modifications to the Kalahari’s fire bars!

THE VALVE SETTING:
Des stripped of the slide valve covers and started with the measuring of all the motion components. We did found the problem and will be rectified.
Below, Des is busy with measuring and comparing left to the right sides!

THE FLAT WAGON:
A complete under frame restoration was done to the flat wagon. All the brake gears and pull rods were sandblasted and painted with red oxide paint. Arno fitted the overhauled vacuum cylinder to the flat wagon and the brake gears were fitted over the put. A complete vacuum steel pipe was fitted and the brakes were adjusted. This wagon needs a few paint touch-ups to be completely restored. We have stencilled the remaining wooden crates that will be tied onto the new restored flat wagon.
Here are some photos of the new Flat wagon:

B-WAGONS NUMBERS 1629, 2436, 1812:
This three B-wagons was completely sandblasted. New bearings were fitted and the vacuum cylinders were removed and overhauled by Arno.

Ben spray-painted the B-wagons completely and they are now ready to go over the put. We only needs to fit back the three overhauled vacuum cylinders, and fit brake blocks. The brakes will then be adjusted and a vacuum brake test will be done. We then need to paint the handbrakes with yellow paint and will complete the restoration on three B-wagons. We shall have 13 B wagons restored after this three is completed.
It would look spectacular working a train up the Pandora embankment with 13B wagons with a brake van at the end.

WAGONS FROM FICKSBURG:
Six 3'6" wagons and three passenger coaches were roadworthy last Friday. Spoornet shunted them on Wednesday and they were moved to Vailima and Kommandonek respectively.

The three passenger coaches were left at Vailima and will be moved by road to be a part of the consists behind the Class 10Cr at the Hoekfontein Station.

THE MOBILE WORKSHOP:
The Mobile workshop was prepared to assist us with the movement of the three passenger coaches to Hoekfontein. This is a challenging and excited exercise that will take place in the next week.
Four 50 ton air jacks were loaded into the workshop and all the rest of the essential equipments and tools.

The Mobile workshop will be parked in the siding at Vailima Station and the full extend of the workshops ability's will be places into act to enable the movement of the almost 20 metre long, 37 tons coaches.

COSMETICAL UPGRADING OF DISPLAYED STATIONARY BOILERS:
Jacob started with the cosmetically upgrading of the three stationary boilers on display. He have started with the one at the admission blocks and will proceed to the two standing near the end of the polo field.

TRAINING:
Training is certainly one of the aspects that will never reach the end of the line. We are holding a safety meeting each Friday morning and then have a lecture on operating safety for the last half hour of the Friday shift.

CERTIFICATES:
Des Clark has attended the first aid coarse and have past the required examination to get his certificate in First aid.

Derrick van Zyl has past his fireman training and was issued with a fireman certificate by Spoornet.
Here is Derrick, smiling ear to ear, in front of the locomotive on which he has been passed as a fireman by the Locomotive inspector. This was done during the Avontuur Adventurer in the beginning of September. 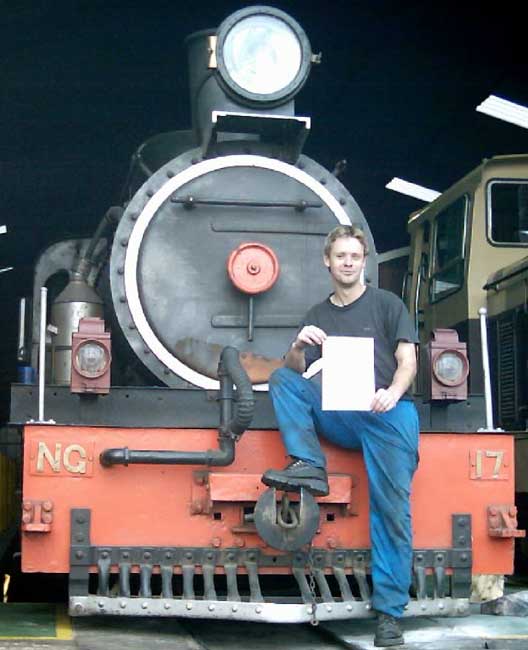 The next step for him is to pass his exams on driving these magnificent machines.

PLANNING FOR NEXT WEEK:
1.) To move three coaches from Vailima to Hoekfontein.
2.) To spray weeds on railway line
3.) To finish three B wagons
4.) To fit fire bars to Kalahari.
5.) To finish third softener house
6.) To finish Barclay valve setting 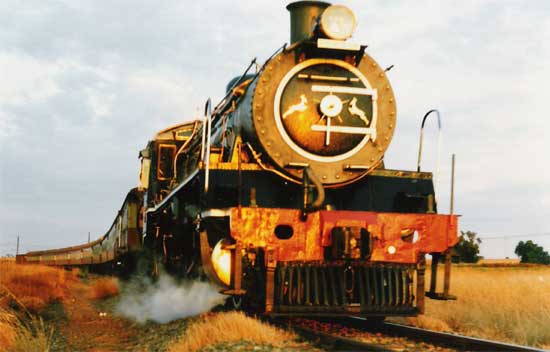 Class 24 number 3635. This was the last Steam locomotive to run over the Theunissen to Winburg branch line in May 1988. The driver of the train was Errol Seaman and fireman John Makwena. This is one of the locomotives about to be cut up. This very day there were three passenger trains running from Theunissen to Winburg hauled by this locomotive. Late locomotive Inspector Mr Mossie Mostert accompanied the locomotive. The last train arrived in Winburg Station just before sundown. A "braai" was held on the station and Mr.Johan Uys, Regional Manager from Spoornet explained to all present how much they were about to safe by using diesel locomotives on this line. It seems not to work out that cheap, and the diesel depot at Theunissen was also closed. The line is now operated from Virginia and only sees traffic if the grain mills needs grain wagons. A speed restriction of 15Km/h is over the entire line due to no rail maintenance for years now.
Sad to see all the branch line to end on this tragic way.