There has been much discussion about the correct number for this particular locomotive that is loosely referred to as Sezela No. 3.  Here is an update from John Middleton who is without question South Africa’s most acknowledged expert on all types of South African locomotives:
Sezela 3 is indeed intriguing, we don't have the full story but are trying to piece it togther.The original loco was a 1915 Avonside that was trasnferred to Esperanza as their 6. There is a photo of it dated 1966 at Esperanza in original condition but we don't know exactly when it moved. Presumably the SEZELA 3 plates were removed at Sezela before it left, ready to be refitted to something else. Currently we think that this "something else" was AE 1936 which was previously Renishaw No.1.
Renishaw 3 - Avonside 2035 also went to Sezela but we don't know when. This was an 0-6-0T as new. We only have the Avonside works photo of it as an 0-6-0 because it was rebuilt as an 0-4-0 at an unknown date. Renishaw got diesels in 1954/55/58/64 so its quite possible steam locos 1and 3 wento Sezela in the 50s.

Now the loco at Sandstone has boiler 28861 which was registered new in 12/1967. I looked at it very closely last year and the frames are not original. They are all-welded for a start and are in absolutely pristine condition leding to the reasoning that it was a new fabrication at the same time as the boiler.
Hannes - Gary Barnes has sent a photo of Sezela 3 in rebuilt condition taken by you in 1965 - is the date correct ? If so it throws the logic above into question.
- John Middleton (7 june 2012) This email address is being protected from spambots. You need JavaScript enabled to view it.

I met Sezela 3 during the late 70’s, she and another NG loco were plinthed in front of a local engineering company (Dunn’s Engineering) which repaired and maintained steam locomotives on the many coal mines in and around Witbank and Natal. I built a model of Sezela 3, took it one day down to Durban to run it there at a club. Met a guy there, Eric Angus, he saw Sezela 3 and said that he has some pictures of cane loco’s, would I like to see them, he took them just before the system closed. Eric had copies printed and gave them to me, later I distributed them amongst other interested people.

did not take that picture, in fact I don’t think I had a camera way back in 1965, those luxuries only came somewhat later.

My belief is that Eric took the picture of Sezela 3 perhaps 68 or 69, hope this helps a little bit

-----------
Hannes Paling has sent us two great photographs of Sezela No. 4 and Sezela No. 3.
Thanks Hannes, we appreciate this great contribution to our archive photographic collection."

Sezela No. 3 of course is in use at Sandstone

Hannes Paling has sent us this amazing picture below. Thank you for your continuing contributions. 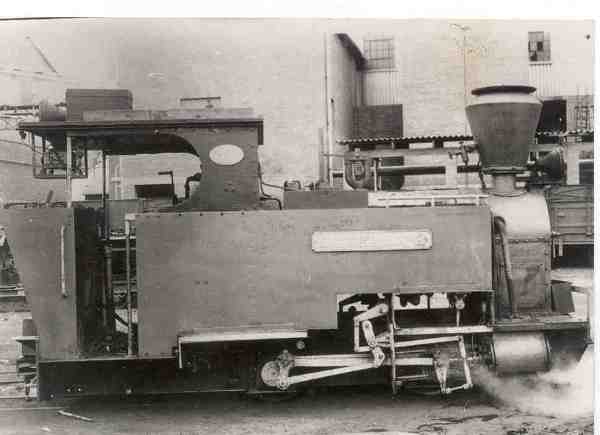 Sezela No. 3 in her real working days, presumably at Sezela Sugar Mill. Picture taken by the late Eric Angus, circa 1968/1969.