On another subject, remember I arranged for a copy of Return of the Giants to be sent to Kerry Young in NZ? Well, I've been waiting on tenterhooks for him to watch it, knowing what the response would be.


Firstly, this came:
I'm here to lay on record that the video is without doubt, the best of its type I have ever seen. 'Return Of the Giants' should be seen nationwide.

My greatest testament to the quality of the production is to say that my wife, a sworn non believer in things rail, saw the entire show from one end to the other. Quite to my amazement. As a documentary of its type, it has no peer. What a wonderful insight into your country’s natural attractions. 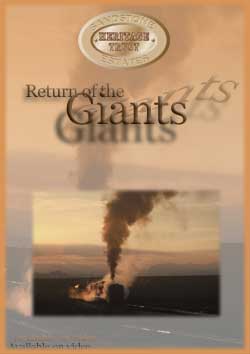 So much of the countryside like our own, but ever so much more of it of course. Sympathetic cameramanship and production, brought the subject and the country together in a spectacle that no one could ignore. Some of those low sun shots were of 'National Geographic' quality. Much of the shooting was obviously taken at the right time of year and of day. You cannot bring together material of this calibre over a few weeks or even months.
What can I say with reference to the ambitions of Sandstone Estates? Mind blowing, yet not of dreamers. Practical and hopefully, attainable goals. There would be few enterprises willing to stake such an undertaking. How can it be that the name is not more widely known? As a rail and locomotive enthusiast, much of the footage gave a tantalising insight into the restoration operation. Something that for me personally, was meat, bread & potatoes. The restoration of a 25NC is no mean feat, let alone everything else, seen and not seen. As a member of a rail restoration group, I know full well, the unsung work involved.
I have to say, I lack the superlatives with which to attest the quality of this production. I cannot thank you both enough for your input into the deliverance of this piece of informative entertainment. Already it is in the hands of fellow enthusiast Colin Dash. Andy S. will know the name from my writings. Colin has seen the CD you sent and was both amazed and highly enthusiastic about that. Colin does a lot of commercial video production and his work is widely known and respected. He was over the moon to learn of this video and hopes to see it with another of our fraternity on Saturday night. I shall report back.
He then lent it to Colin over Easter, when Ferrymead has a big Open Weekend, and had this to say:
The 'Return of the Giants'. It was a Full On day @ Ferrymead yesterday (& today) so I packed me kit & caboodle and headed off down for the whole day. Colin was Moorhouse Stationmaster for the day and so I got to see a lot of him as I went to and fro. He was saying that he had a number of North Island visitors staying (Colin is single) and also a number of local visitors passing by his home yesterday. Seems he ran the video for a few folk and the word got onto the grapevine straight away. Had to have a second showing later in the evening for the number of locals who came around wanting to see it! So Sandstone, after a slow start, has got away with a hiss and a roar! It will be a topic of conversation throughout NZ in certain circles for a while. You might like to let the Sandstone team know that their organisation is getting rave reviews here. (Both for content and presentation. That production work was magnificent.) Coming to think of it, the best way to publicise that sort of material, is to give it to Colin who is regularly in contact with all the 'whos who' of the rail preservation movement in NZ. Stick by Colin and you get all the news.