Designed by PA Hyde for the Central South African Railways (CSAR), these engines of the “Mikado” wheel arrangement were the only such type to run on the Cape gauge in South Africa apart from two experimental engines on the Cape Government Railways. Thirty-six examples were delivered in 1904 and put to work on coal traffic between Witbank and Johannesburg. They proved to be too heavy for the track and were stored for nearly a year while a number of bridges and sections were strengthened. The concentrated weight over the driving axles often led to derailments of the lightly loaded front pony axle and it is not surprising that no further 2-8-2 locomotives were ordered in South Africa. The subsequent South African Railways favoured the 4-8-2 “Mountain” type. 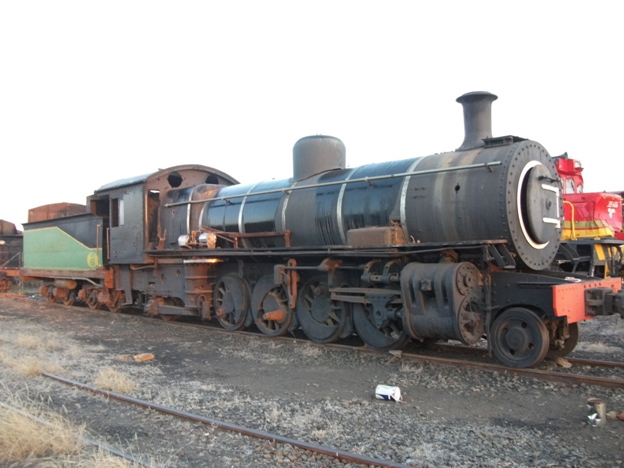 Class 11 No. 929 at Bloemfontein prior to cosmetic restoration. Picture by Lukas Nel.

By 1940 the delivery of more powerful engines relegated the Class 11’s to more mundane shunting duties in Port Elizabeth, Kimberley and Klerksdorp. The last were withdrawn by 1975. Nevertheless, the usefulness of many members of the Class 11 was not over and many were sold to mining operations both in the then Transvaal and Orange Free State. They proved worthy additions to the mine fleets and many continued working until the mid 90s.

Sandstone’s No. 929 became Freegold’s President Steyn Mine No. 6. 1976 records show it in storage so it was probably sold to the mine before 1975 when the last of the class was withdrawn. In 1991 records show it “out of use” so it is possible it saw little if any service during that period. Today no less than 11 examples of the class survive in preservation although none are in working order.

Sister Class 11 No. 942 is displayed at Witbank Station. This example saw no mine service and was preserved directly by South African Railways. Picture by Dave Richardson.

No. 929 was acquired from the President Steyn Mine by the Transnet Heritage Foundation in the early 90s and was subsequently sold to the UK-based North British Locomotive Preservation Group. Plans to export the loco to the UK fell through and Sandstone acquired the locomotive in 2013. The locomotive is located in Bloemfontein at Sandstone’s restoration facility and is currently undergoing cosmetic restoration.