The Next Generation - Steam and Heritage enthusiasts

The Next Generation - Steam and Heritage enthusiasts

Sandstone Estates is delighted with the fact that we have so many young people who are competent to operate older machinery.

Shawn Spaan has been coming to Sandstone for many years and is now an accomplished operator on many types of our machines.  Steam Rollers are not for the fainthearted or for the ill qualified.  Here he is comfortably manning one of our steam rollers which we use regularly to do road maintenance on the estate. 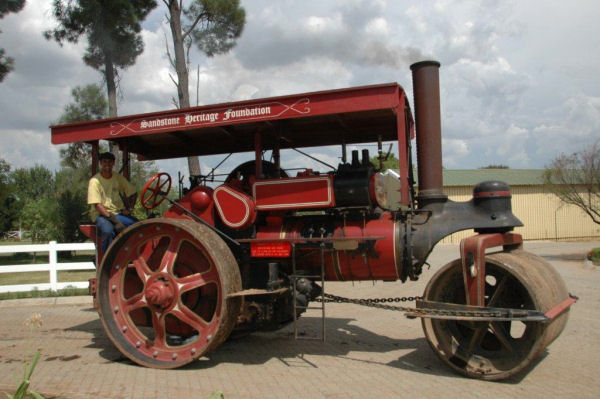 We will be doing a feature shortly on all the younger people who work for us or with us from time-to-time and who represent the next generation of Steam and Heritage enthusiasts.

Sandstone’s latest restored steam locomotive will be hauling trains over the weekend. The 1968 Johannesburg built NGG16A number 155 will haul trains for the first time in 21 years!

Sandstone open at Cherry Festival Time! 19 to 20 November 2021 plus the launch of their latest steam locomotive, NGG16A number 155.

Please note that strict Covid 19 protocols will be followed and no one will be admitted if not wearing a mask. A screened temperature over 37 degrees will also result in non-admittance together with other members of the party.Click here to Read more

At time when tourism is under threat from the pandemic it is good to see positive publicity for attractions in South Africa. Rove SA online edition for September 2021, recently covered a visit to Sandstone, enjoy the read!

The last locomotive from Bloemfontein moves to Sandstone.

The last Sandstone locomotive has now left Transnet’s  Bloemfontein Depot and has arrived at Sandstone Estates near Ficksburg. This is 11th Class number 929.

Designed by P.A. Hyde for the Central South African Railways (CSAR), these engines of the “Mikado” wheel arrangement were the only such type to run on the Cape gauge in South Africa apart from two experimental engines on the Cape Government Railways. The last examples were withdrawn by 1975. Nevertheless many were sold to mining operations both in the Transvaal and Orange Free State. Sandstone’s No. 929 became Freegold’s President Steyn Mine No. 6. In 1991, records show it “out of use” so it is possible it saw little if any service during that period. No. 929 was acquired from the President Steyn Mine by the Transnet Foundation in the early ‘90s and was subsequently sold to the UK-based North British Locomotive Preservation Group. Plans to export the loco to the UK fell through and Sandstone acquired the locomotive in 2013.

Our photo gallery shows number 929 being loaded together with its tender and arriving at Sandstone.

The GMAM arrives at Sandstone.

We received this excellent video of GMAM 4114 arriving at Sandstone which shows the sheer size of the multi axle trailer. Those who know the area will recognise that the truck is coming from the Bethlehem direction! Purely a navigation error as the convoy missed the turn into Sandstone Estates from Ficksburg and had to proceed as far as Fouriesburg where the road widens at a major intersection in order to turn around for Sandstone. Enjoy the video.

A great article on our loco moves from Bloemfontein to Sandstone with many thanks to Paul Ash and Times Live.

GMAM 4114 has been off loaded at Sandstone into its new position next to the main security gate. Our picture gallery shows the loco being offloaded from the multi axle trailer via the gooseneck lowbed as a ramp and finally in position in its new display area.

The movement of the Sandstone locos at Bloemfontein prompted photographer, Graham McWilliams to send in some pictures of GMAM 4114 at Graaf Reinet in 1979 and also a shot of 24 Class 3688 at Waterval Boven in 1984. It’s always good to see preserved locos in their past lives.

GMAM 4114 stands at Graaf Reinet depot in 1979. It was to be many years before its sale to Randfontein Estates Gold Mine where it became R5.