*Inventory of Stationary Engines as at October 2004

Inventory of Stationary Engines as at October 2004

Maize Sheller (Made in United States of America). Northson Junior.
All wood.

Click here to view an Inventory of Stationary engines as at June 2006.

Stationary Engine Collecting, Restoration and Showing in South Africa probably differs from most other countries. There are not many committed collectors, separated by huge distances, and perhaps too many engines to go around? We also have a thriving scrap-metal industry, so it's often a race against time to secure these engines and related pieces of driven equipment, before the scrappie does!

Engines and Machinery come from all parts of the world, with almost no indigenous models. UK and USA manufacturers were well represented here, so we see plenty of Listers, Petters, Ruston & Hornsbys alongside Internationals and Fairbanks Morse. European makes such as Deutz, Sendeling and Bernard are frequently found, but only occasionally from further afield. Eastern European types are very scarce, and as Southern Cross had a branch in Bloemfontein, we see them, but seldom any other Australian, and no New Zealand models.

Driven machines are often similar to those seen elsewhere, generators of famous makes like Bruston and Siemens Schuckert are popular, grain and feed mills by Bentall and Richmond & Chandler, feedcutters, balers and other crop-based machinery. Pumps are also popular, both centrifugal and reciprocating, as well as working-heads for boreholes, or Kragkoppe as we call them. 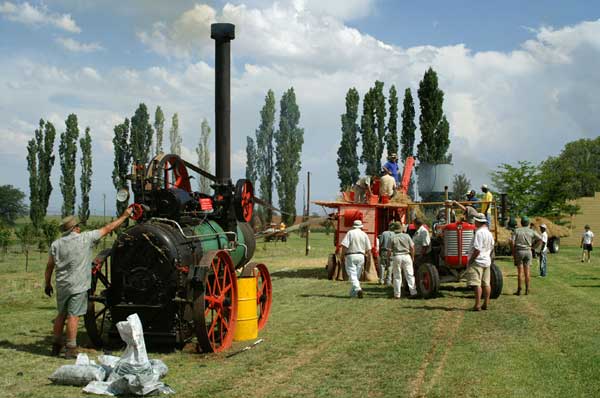 Just occasionally, something really rare turns up, causing a stir with the international experts; the only surviving example of one model of Southern Cross engine, and an early 20th century Wafflard engine from Belgium, being two examples. Recently a rare Pasley engine dating from 1909, and an Ellwe from Sweden have turned up.

We are in constant contact with a helpful band of these experts in many countries, and many enthusiasts subscribe to overseas magazines such as Stationary Engine Magazine in England, Gas Engine Magazine in the USA, The Old Machinery Magazine in Australia and Vintage Scene in New Zealand. I compile an informal web-based newsletter called Paraffinalia, www.paraffinaila.org which anybody can receive direct, free, by writing to me at This email address is being protected from spambots. You need JavaScript enabled to view it.

We are encouraged by news that the Sandstone Heritage Trust is in the process of building a dedicated Stationary Engine Museum at Sandstone Estates in the Eastern Freestate, and hope it will become a magnet for some very special pieces of equipment.

Shows are often at people's private houses, sometimes museums have open days, and often displays are mounted along with old tractors at Agricultural Shows. There are several clubs around the country, either dedicated Stationary Engine clubs, or as parts of the Vintage Tractor movement.