The first of the class, it spent its life, in the then South West Africa, until 1960 before arriving at Humewood Road Depot in 1961. On arrival in South Africa, the Class NG15 were known as “Kalaharis” after their time in South West Africa. Numbers 17,18 & 19 continued in service until the mid 80s.
Number 17 was withdrawn on 7th October 1985 and Number 19 on the 17th March 1986. Number 18 was withdrawn around the same time and sold to an enthusiast in Texas.
Being the first built, Number 17 was a candidate for preservation and was sent to Springs Depot, near Joahnnesburg, together with a number of other narrow gauge locos. The planned preservation fell by the wayside and NG17 was soon swallowed by the undergrowth at the back of Springs Depot, almost disappearing from view.

Sandstone negotiated with Transnet to lease lend the locomotive and on March 23 2002 it was freed from its overgrown surroundings and taken to Bloemfontein by Lukas Nel and his team. The entire locomotive and tender was stripped and rebuilt, the boiler retubed although the super heater flue tubes, being of an odd size, had to come from Germany which delayed the process slightly.
Missing parts were fabricated or taken from Sandstone’s stores, including a new chimney.
In July 2003 the locomotive was moved to Hoekfontein and steamed for the first time. At present it is still the only operating NG15 in the world.

Number 17 gained celebrity status in September 2005 when it hauled “The Avontuur Adventurer” tour train from Port Elizabeth to Avontuur. In doing so it became the first steam loco to reach Avontuur for some 10 years. Number 17 performed impeccably and is now back at Hoekfontein working on the narrow gauge line at Sandstone. 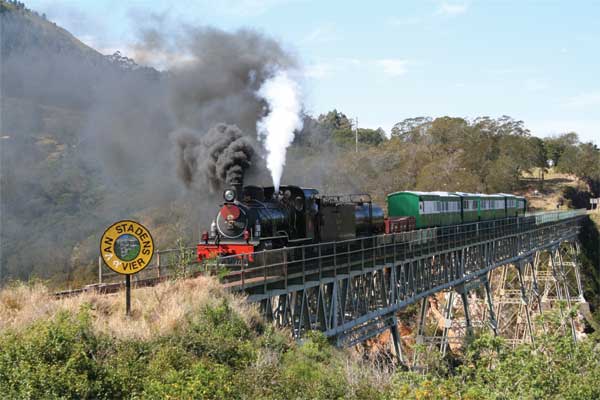