This was supplied to Pretoria Portland Cement (PPC) from Wickham of Ware in November 1962. Its works no. is 9234 and its a Type 27 Mk III Open, with a 10 hp engine, able to seat seven people.

It was acquired some time ago in scrap condition from the Eastern Cape and put aside pending repair. Desmond Clarke took it under his wing and the result is an excellent and useful little inspection vehicle. 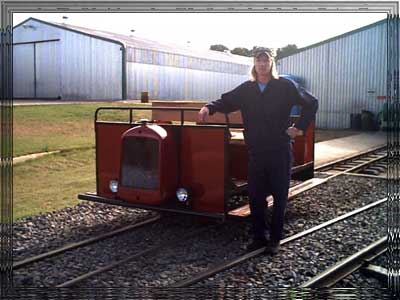 Desmond takes up the story.

When the Wickham rail car arrived at Sandstone Heritage Trust it was in a really bad state. It did not have any body panels, seats, motor or gearbox. The original box shape radiator and nose were still in place but un-usable.

First it was stripped till only the chassis remained. The chassis was sanded and painted black and the axles and wheels received the same treatment. With the chassis complete the wood floor was measured up, cut to size designed fitted.

Even if the original motor had been saved it would undoubtedly have required a major overhaul and probably parts would be difficult to source. So with no original motor or gearbox we fitted a Toyota 2C diesel motor and a 5-speed gearbox, which were longer than the original units. The engine mounting was not changed but the gearbox mounting was removed and new mountings were made.

One problem with the gearbox being longer, was that the gearlever was almost between the middle and rear seats and required a driver with very long triple jointed arms! Links was made to be able to move the gearlever so that it is next to the driver, which turned out to be a long process of trial and error.

The original radiator was past repair and was replaced with a bigger rounder and honeycomb looking radiator from the stores, which formed the new nose of the Wickham rail car.

The space between the driver and passenger seats were covered with a steel panel which is also painted Cardinal red.

The gearlevers are housed in this panel with stainless steel surrounds around the gearlevers. A new fuel tank was placed underneath the rear seat to hide it and to add weight onto the rear axle.

A new instrument panel was built to accommodate a water temperature, oil pressure and amp meter gauges as well as the ignition switch. The instrument panel is placed in front of the driver.

An engine cover was also made using the existing cover as a pattern and also painted Cardinal Red.

The middle seat was lengthened to seat 3 people instead of 2.

The Wickham now seats 8 people after restoration. Clutch and throttle pedals are still original, brakes are applied by using a handbrake lever which was fitted during restoration in preference to the earlier arrangement.

Performance could be described as startling as with the more powerful engine in such a lightweight chassis means there is power to spare."

With several similar units coming from Sena Sugar in Mozambique this vehicle served as a trial run for them as well as assisting Desmond in acquiring new skills which are also of use outside a railway environment.