Visitors to Stars of Sandstone 2015 will remember this impressive vehicle in our military parades. We had hoped to couple the Oshkosh to a low bed tank transporter made available to us by the SA Armour Museum in Bloemfontein. This trailer has been identified as period-correct for the Oshkosh by Pieter Du Toit who worked for Oshkosh at the time. Unfortunately the fifth wheel coupling was not compatible between the Oshkosh and the trailer so we were unable to transport Sandstone’s Sherman tank for the event.

A period publicity shot of the Oshkosh R

The Oshkosh has now been sent to Bloemfontein so that inspection can be done to align the trailer and horse. This will involve replacing the fifth wheel on the Oshkosh with a 100 ton fifth wheel which will raise the trailer by 15cms. A suitable fifth wheel is being sought and after fitment the truck and trailer combination will be returned to Sandstone for some remedial and repair work for both to be put in to 100% working order. 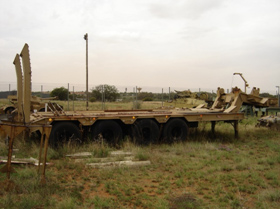 The low bed trailer for the Oshkosh 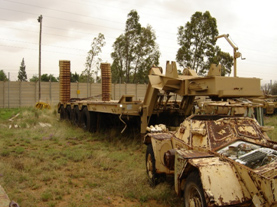