South African Defence Establishment issues tenders regularly for the sale of redundant military vehicles. The Sandstone Heritage Trust has been quite successful in running a number of these tenders in the past. Recently a number of Samil military transport vehicles were acquired. Our picture shows a Samil 20 (right) and a Samil 50 being loaded onto one of the company's lowbeds after being collected from a sub-contractor who carried out a cosmetic upgrade on the vehicles. The company has developed a close working relationship with the School of Armour in Bloemfontein and a number of other regiments including a number of museums with a military theme. The objective is to preserve indigenous South African military vehicles for historic and heritage purposes. 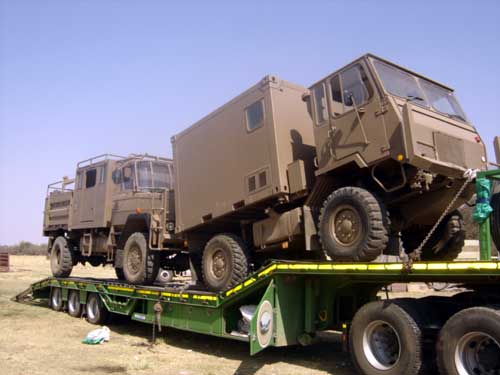