Some time ago Sandstone Heritage Trust was offered a strange looking chassis that had been found under a pile of scrap in a breakers yard. 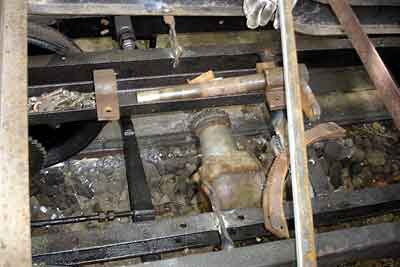 The wheels are 2ft gauge and consist of a four wheel bogie with a two wheel axle at the other end. No engine, mechanicals or body unfortunately and no immediate clue as to its identity. Could it be the remains of the forty seater Wickham railcar built for Consolidated Gold mines in 1956 which had a similar layout, possible as that has disappeared, or is it something else perhaps that Dunns or one of the old rail industry companies acquired or even produced?
Whatever its origins it was obviously too good to scrap so was placed in safe undercover storage in the hope that more information would be forthcoming at a later date.
More recently Sandstone was offered the body and some other parts of a circa 1910 BSA car. This once grand vehicle was an open four seater tourer but as it was far from complete and looked to be another interesting item that would also be saved for posterity but with little chance of seeing the light of day in any meaningful way again.

However, following Desmond Clarke's restoration of the small narrow gauge Wickham trolley it was decided to see if the narrow gauge rail chassis and BSA tourer body could somehow be united into one unique inspection car, reminiscent of those old scenes of early days of African railways and tours of inspection by the management.

Desmond got busy and gathered all the parts together in the workshop to see if such a vehicles was possible and lo and behold, with a lot of work, the period radiator from the car, a modern engine, gearbox, drive train and accessories, and some high class mechanical work and panel beating, turn of the century upholstery and trim it will all fit together and look like it was made that way.

Another interesting feature will be a hydraulically driven turntable mounted underneath, similar to those under the modern Trackmaster inspection vehicles, to enable the vehicle to be turned at the end of the line rather than having to run for several kilometers in reverse with the risk of damage to engine or gearbox. In the days of yore the line's General Manager would have had his party of African bearers but that's probably not politically correct these days!

Fortunately the workshop staff have plenty of expertise with hydraulic equipment as there is a lot of it fitted to modern agricultural machinery.
In the process of turning two interesting artifacts into one interesting and useful piece of vintage rail equipment Desmond and the other staff concerned will gain an enormous amount of knowledge and skills not normally able to be gained by the younger generation which will stand them in good stead for the future – empowerment at its best and most interesting.
Work continues as the accompanying illustrations show and there will be regular updates on the website. 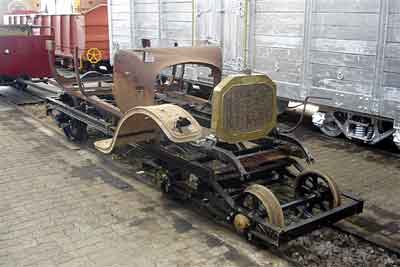 Further work has been done over the Christmas period which has included a trial fit of one of the BSA mudguards. Still in unrestored conditioned it gives an idea of what the finished article will look like when complete.

Desmond has also fitted a differential or reduction drive rear flat belt pulley mounted PTO (power take off).
from a Massey Ferguson 135. He took off the flat belt pulley, put a sprocket on it, which now makes this
sprocket on the back just visible on the left-hand-side. It is a very heavy duty reduction box which will do an excellent job.
That is one of the advantages of rail preservation alongside a big agricultural operation because you have access to lots of interesting parts that, provided you are prepared to use some lateral thinking, can serve a variety of different uses.